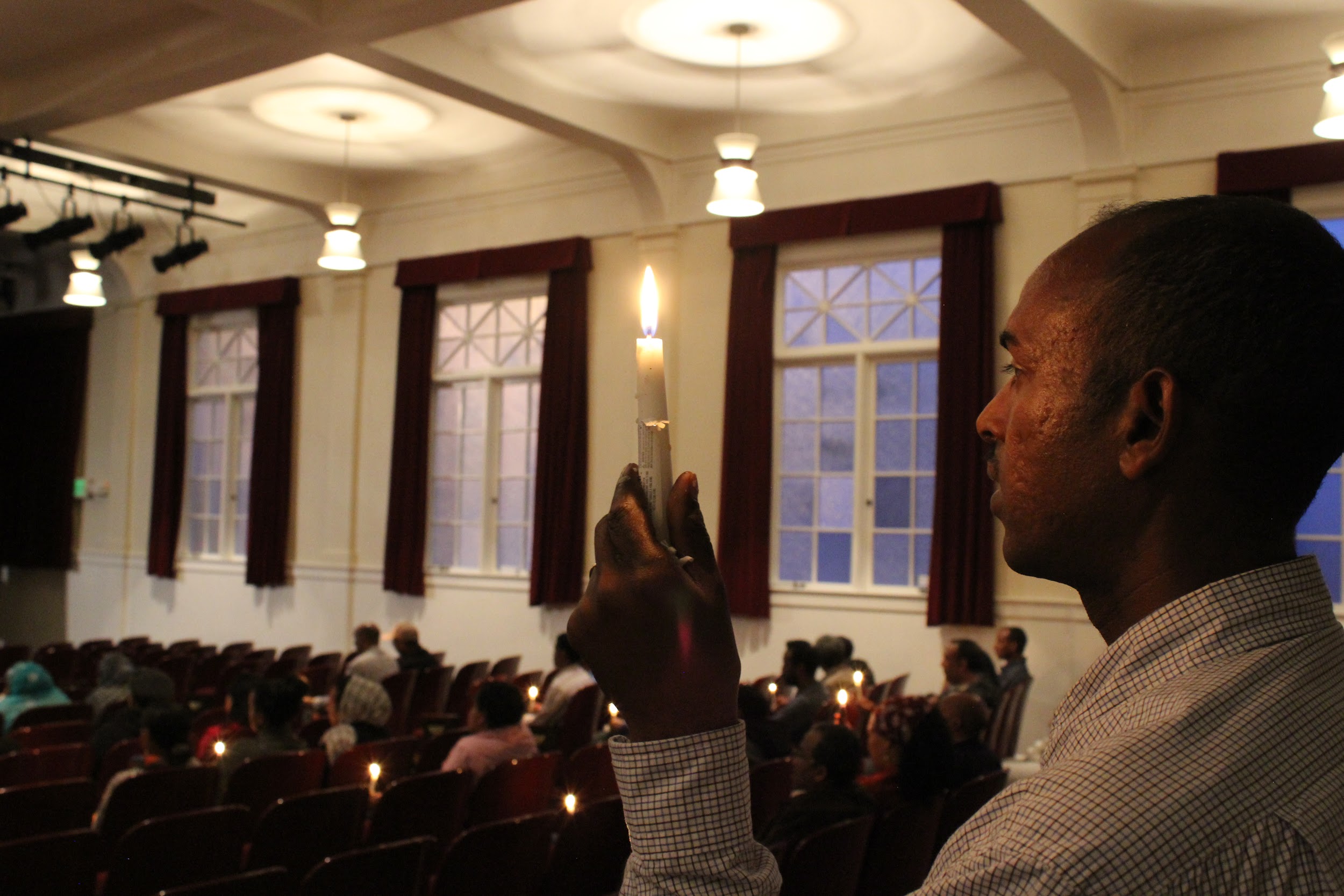 During both events, community members moved from prayers and mourning to speak extensively about what may have caused their countrymen to even be in Libya. Some at the open forums faulted their country’s economy and for not providing opportunities for youth to stay at home.

At the Ethiopian Community Center, women doubled over in tears. Seattle’s East African diaspora families were pained to discover the images plastered across the news were of their people. Ethiopian Americans spoke out about the worry they feel for their families back in their homeland because the distance made them uncertain of their relatives livelihoods.

“We need to do something, we need to train our people for jobs, we need to give them opportunities,” said one Ethiopian community member.

A week later, Eritreans gathered at the Rainier Valley Cultural Center. On a large screen, a YouTube video played showing a capsized boat off the Mediterranean Sea full of fleeing Eritreans – a travel route many East Africans have taken as a way out.

At both events, community members passed stories and learned more about the victims through difficult-to-read African newsletters with nuanced details from those most directly affected.

On April 19, ISIS issued a video showing members of the terrorist group shooting and beheading Ethiopian and Eritrean men in two regions in Libya. The video, following masked assassins leading hunched over, jumpsuit-wearing Eritreans and Ethiopians to their deaths, threatened viewers to accept the Islamic faith. The victims were proposed to have been migrants who traveled north to Libya.

Why East Africans are traveling out of their countries is a speculative debate. In Seattle, assured East African community members blamed their country’s governments for not getting down to how this tragedy could have happened.

At the Ethiopian Community Center, members found their seats and the morning immediately began with a religious prayer in Amharic, the native language in Ethiopia. Among them, the mayor’s office, assistant police chief Robert Merner, councilmembers Bruce Harrell, Kshama Sawant and others demonstrated community support.

In the back a low cooing of “whoa” began as Sawant rose to the podium. Sawant’s hyper-active role in the city has grown an admirable following from diverse communities. Seconds into her speech, she eased listeners with an acknowledging opener.

“Selam my sisters and brothers As-salamu alaykum, thank you for including me in this moment of grief,” said Sawant.

Her simple gesture swept through the room because she used two forms of saying “hi”, both Amharic and Arabic—used by practicing Muslims, to indicate solidarity amongst Ethiopians of all religions.

Members from the Ethiopian community were given the opportunity to express their thoughts about the impact this incident has had in Ethiopia and in Seattle, where there is a strong East African community, in an organized forum.

During this time a political tone emerged from the crowd. Men, women, and even children all stepped on stage to discuss the lack economic opportunity in Ethiopia. This consensus was important to the attendants because it related to Ethiopian men leaving their country —having not been able to find jobs—into regions like Northern Africa and the Middle East.

This “root” problem, as it was defined by some speakers, was unsettling for many. Some members thought this conversation to be unbearable and got up to leave because mourners were now listening to what seemed like, an untimely discourse about government. Though controversial, discussion on emigrating citizens and the lack of opportunities were revisited at the Eritrean vigil as well.

“We may not know them [victims] by name, but they were just like us. Seeking a better life,” said one Ethiopian community member.

An April 27 “All Things Considered” story claimed that Eritreans were leaving their homeland because youth are stifled by a limiting economic system. Eritrea and Ethiopia, different economically and in population, seemingly face a similar feat to provide resources that would incentivize citizens from leaving in search of the risky unknown.

Tsegay Berhe, advisor for the Eritrean Orthodox Church in Lake City and senior executive member for the Archdiocese of North America, attended the Eritrean vigil and very much believes there are reasons causing young Eritreans to leave their country for work.

“I don’t think you can talk about the tragedy, especially looking at the victims – the youth running away from the country – without understanding the root cause of the problem. The root cause is youngsters, especially ages from 16 to 28, 30, are running from the nation they love,” said Berhe.

Members of both communities are worried. They want a solution to keep Eritreans and Ethiopians in their countries, but until something is done to prevent East Africans from wanting so desperately to leave, they fear for those who may flee into these regions, easily becoming potential victims to more brutal killings.

“Its demoralizing, it’s painful, but what makes it more and more painful is we don’t see an end to this tragedy,” said Berhe.

What’s left is hope. Both communities are gripping onto this prospect before more dialogues can even be organized. As for now, families separated by land and sea are suffering, said Berhe.

“The victims are Eritrean families,” he said, “a nation without youth, cannot be a nation, cannot survive long-term.”