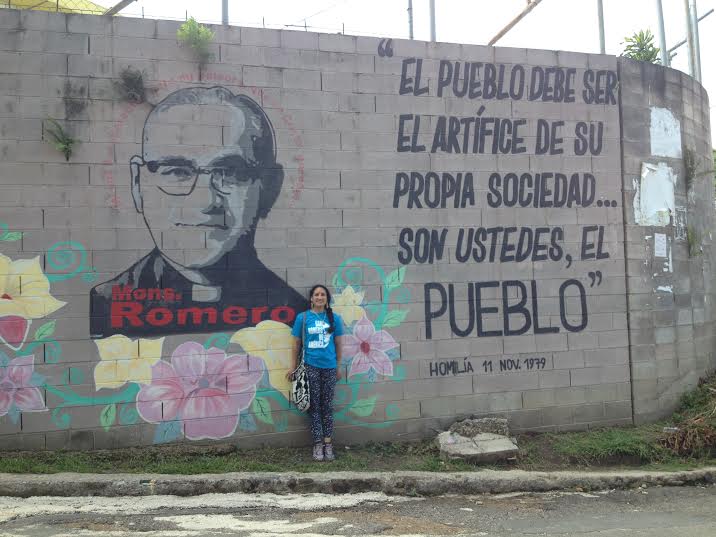 I found myself in El Salvador for 48 hours this passed Memorial Day weekend due to a family emergency. As I stood in line to pay the tourism fees to enter the country, I learned about a historic “beatification day” happening over the weekend. Two nuns standing right behind me in line, had run into “the famous John Dear”, and were star struck. They were excited to be in El Salvador to commemorate the martyr, Archbishop Romero, 35 years after his assignation: “this is a big deal and people from all over the world are coming for this important day,” they informed me.

Pope Francisco called for the canonization of Archbishop Romero to become an official saint of the Catholic Church, the beatification day is the first step in this process. With all the expectation in the air, I realized that the lessons Romero taught the pueblo are still relevant and are applicable from the mountains of El Salvador to the valleys of South Seattle.

During El Salvador’s armed conflict in the 1980s, Romero stood against the oppressive forces of El Salvador’s government condemning mistreatment of the marginalized poor. Because of his unrelenting force to agitate and educate the poor, reminding them of their innate power to rise, Romero shifted the locus of power in the country. What is most interesting about Romero’s story is the transformation he underwent as he assumed the position of Archbishop. He started off as the moderate choice. The Catholic Church did not expect Romero to make waves. But once he saw the plight of the poor, and the daily disdains they suffered, Romero underwent a paradigm shift. He then condemned the Salvadoran government, in his homilies, organizing pueblos, becoming a formidable force that eventually led to martyrdom.

The most inescapable question that Romero asked during the armed conflict was “who are the poor among us?” Romero identified the poor, and then he joined them in solidarity. During the 1980s “the poor” were certainly children and youth caught in the crossfire of bullets and bombs. Thirty-five years after Romero’s assassination, the people of El Salvador still live in a repressive state. Gone are the tanks, and flying bullets. But there is a new kind of war.

I got a chance to be near the beatification’s ceremony. As a friend and I took the bus back home, I bumped into a family friend named Alex. I asked him what the beatification meant for the Salvadoran people, “it’s an honor for us,” he said. I asked further, “there is no longer an armed conflict, what would Romero be fighting if he were alive today?” Alex responded, “you’re right there is no longer an armed conflict, but now there is a new kind of war, and it’s psychological in nature.”  Alex was referring to El Salvador deep networks of mareros or gangster have created a de facto police state controlling many aspects of society. This is the  new repressive state in El Salvador.

And in Seattle, the fast growing city in the country, Romero’s question applies: who are the poor among us? Could the poor be the wealthy businesswoman with no social network, or the materially poor family with an extremely connected social sphere? Is it the unemployment rate in Rainier Beach, three times more than the city rate? Or how about the undocumented families living in slum housing along the Rainier Ave. corridor, often invisible in the wake of high rises and condos popping up everyday? It’s easy to ignore the poor among us, in the midst of a changing city landscape.

The truth is from the mountains of El Salvador to the valleys of Seattle, our principal warfare is physiological, material, spiritual, and emotional in nature. It’s time Seattle, to begin addressing poverty in a new way by understanding what poverty looks like in our midst. Who are the poor among us? And we the pueblo, must be the creators of that change. Romero said, “el pueblo debe ser el artifice de su propia sociedad…son ustedes el pueblo.” Literally translated, Romero implored the people, el pueblo, to be creators of their society and destiny. So let’s get to work and continue building.

drea chicas, who prefers her name appear in all lowercase, lives, works and worships in South Seattle. She blogs here.

One thought on “From El Salvador to South Seattle”