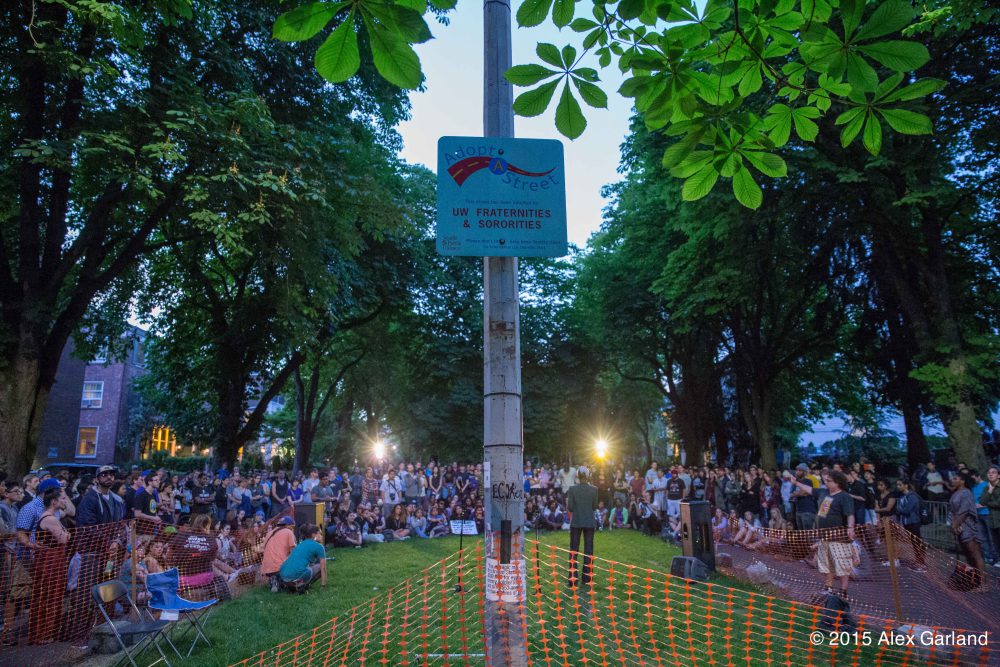 by Alex Garland (originally printed on the Dignity Virus)

The University of Washington’s Greek Row was the site of a rally and block party in protest of alleged sexual assaults, racism, and verbal harassment by members of fraternities.

Hundreds of students, activists, and members of fraternities and sororities attended the street party on 17th between 45th and 47th. Seattle police blocked the streets for the day and put up metal barricades along the sides of the street.

A table with zines was available to answer questions about misogyny and white privilege while people spoke about their experiences with fraternities, from drugged drinks to attempted sexual assault and rape.

Talented performers and MC’s spoke truth through the mic while calling out the fraternities and sororities for not stopping issues perpetuated by the Greek system. Members of fraternities and sororities with houses near the event could be seen sitting on the steps of their houses or lined up on the sidewalk, outside of the barricade, listening to the speakers and music. When approached, however, members of the Greek society at UW were reluctant to speak on the record. Those that did, said that they supported the event and that it was “timely”.

The event ended without any arrests and the only yelling came from passengers in cars that drove by. None of the vitriolic comments seen on the Facebook event page leading up to the rally were heard throughout its duration.