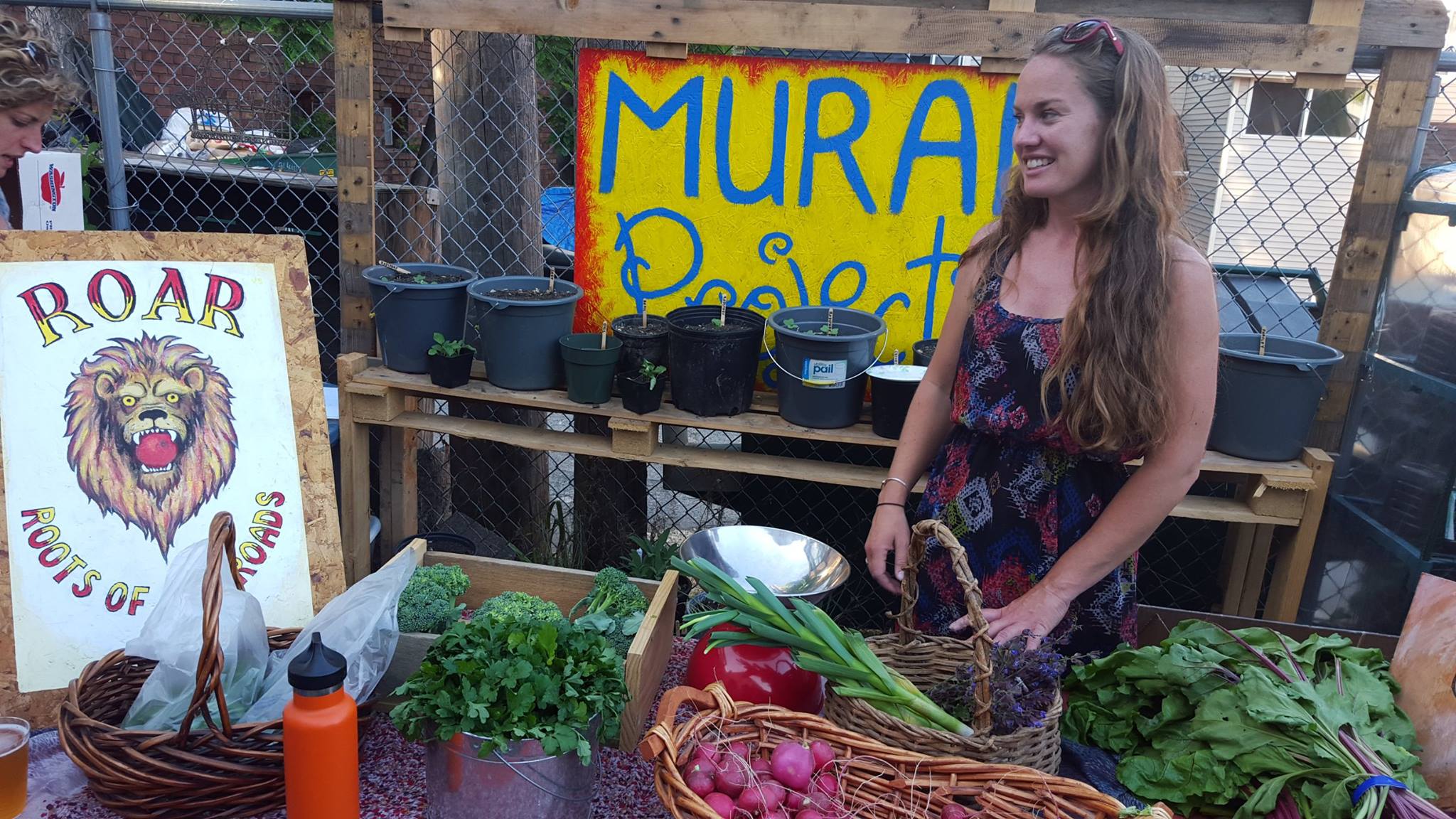 If you happened to be walking up Orcas Avenue on Sunday night you couldn’t have missed the excitement bubbling up from the Hillman City Park and Garden.  A large crowd filled the grassy garden area, spilling out onto the sidewalk here and there.   Adults stood around and talked.  Children chased each other through the vibrant planting beds.  Food was shared and cool beverages were offered.  And laughter filled the air.

What was the source of all this joy and near-utopian togetherness?  A little food accessibility organization called ROAR.  ROAR is a mobile farm stand (think traveling farmer’s market) bringing fresh, local produce to Seattle neighborhoods with limited access to healthy food.  ROAR is an acronym standing for Root of All Roads  – a reference to how food connects us all.  ROAR’s mission is to “[connect] communities with locally grown produce, facilitating education and creating opportunities to come together through the shared experience of food and nourishment.”  Or, to put it simply: bring good food, share new ways to enjoy it together and build community through it all.

Rachel Tefft, founder, director and force of nature behind ROAR is a beam of light as she mans the produce table Sunday, offering tips on the various vegetables and encouraging shoppers to try something new.  “It’s been a great turnout for our opening day,” she exclaims as we look out over the crowd.  “I am so much more relaxed than last year!”

This time last year, Tefft was not so relaxed.  She was rushing about pulling all the loose ends together and managing crises in preparation for ROAR’s inaugural farm stand.  The stand was deemed a success, but the effort in making it so was monumental.  That market was the culmination of years of dreams, research, networking, establishing partnerships, financial risks, tons of sweat equity and a lot of hope.  Tefft, motivated by her belief that a healthy and sustainable lifestyle is a human right, poured all her energy and much of her own money into making the farm stand dream a reality.

Tefft’s idea formed out of her passion for food.  As a dietician, Tefft was concerned about the lack of access to healthy, fresh produce in many parts of Seattle.  Through her experiences working as a dietician focused on food accessibility at Virginia Mason and Seattle Children’s Hospital, Tefft became convinced that the availability of healthy food was only one part of the equation.  “I don’t like the term ‘food desert’,” Tefft says.  Noting that barriers to food are not merely location but also transportation, pricing, belief system and time.  To address these factors would take more than a farm stand in an area without grocery stores, Tefft realized, but a way of creating relationship and connecting around all aspects of food.

Thus was the born ROAR’s ingenious site-specific model.  ROAR partners with each site – working closely with the community to determine the specifics of each farm stand.  Some are more focused on education, some on community gatherings, some on the selling of the food; and each are infused with the character and culture of that specific place.

For example, one of the main concerns for the Indian Board of Health employees who partnered with ROAR on a farm stand site last year, was knowledge about how to cook various vegetables.  So in this weekday lunchtime site employees participated in food preparation together, making new delicacies out of previously intimidating vegetables such as the kohlrabi fritters that were such a hit last year.

There is quite a bit of local character and culture lined up for the 2015 farm stand sites.  The Highpoint Market Opening Day on June 24th will include a ceremony in which Bhuddist monks from the local temple will bless the food and the garden.  Another will be at the Hillman City P-Patch Farm Stand where belly dancers will perform!  Rainier Health and Fitness decided to have live music at their Opening Day.  All these ideas came directly from those at the host sites, not from ROAR staff.  Says Tefft, “Rather than coming in from outside and selling an idea or thinking we know what will work in specific community, we are working in collaboration with the community that is already present.”

Even with so much variety, the ROAR Farm Stands all have a common thread: the opportunity to come together and build community around healthy food.  Tefft believes food is uniquely able to build connections between people of different backgrounds.  “Food can cross social and cultural boundaries,” Tefft explains.  “It is universal.  No matter where we come from, we all eat.”  The markets are all designed, therefore, to create opportunities for people to come together and share about themselves around food: cultural traditions, personal stories and questions about food are all important parts of building true food access, according to ROAR.

In building this exciting food movement, Tefft has received overwhelming support from the Seattle community.  Becoming established as a program under Community Arts Create opened many doors for her in the early days of ROAR, including a strong volunteer base of CAC members and a physical home: The Hillman City Collaboratory.  Similarly, an early partnership with the Rainier Valley Food Bank was essential to initially convincing Tefft her dream was viable.  ROAR also receives substantial support from Seattle Tilth, HumanLinks and the Puget Sound Food Hub.

And Tefft simply cannot say enough about the committed individual volunteers from CAC and The Collab.  “They’ve done so much,” Tefft marvels. “Everything from building produce boxes to making signs to meeting produce deliveries to always attending the first markets when I was afraid no one would show up.”  Without this essential support, ROAR’s first year might have been much less successful – and far more personally taxing for Tefft.  Instead, Tefft drew on her community and was able to offer beautiful food, meaningful connections and dietary empowerment to many parts of Seattle previously underserved.

Come by and see for yourself what ROAR is all about!  They’d love to bond with you over good food.

One thought on “ROAR: A Farm Stand for the People”