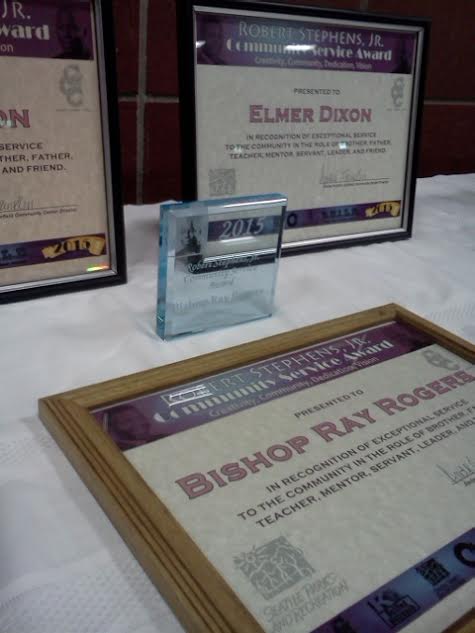 Seattle’s South End and Central District came together this past Saturday to celebrate long time advocates for youth, arts, social justice, and stronger neighborhoods; and even those involved in the planning were amazed by the names of those receiving recognition at the event.

“We selected men who personally impacted us. The men in the room are the ledges whose shoulder we stand on.” Said Garfield Community Center Director Andre Franklin.

Another member of the advisory committee stated that seeing so many true community leaders in one place left them “in awe”.

The event was birthed from a partnership between B.U.I.L.D. (Brothers United In Leadership Development), Unified Outreach, and the Garfield Community Center Advisory Board; along with Seattle Parks, Seattle Office of Arts & Culture, and 4Culture.

The event featured a full buffet spread with home style chicken, macaroni, greens, and corn bread.  An incredible meal that in itself was worthy of celebration.

Music and MC duties were provided by DJ Surreal (aka George Yasutake), and guests were treated to a gravity defying performance from one of Seattle’s hottest breakdance groups, the Vicious Puppies (aka Dog Pound).  Last month the Vicious Puppies brought their dramatic stage presentation of “Black and Blue” to the Neptune Theatre.  The play brings social conscience and race relations to the front lines with a true-to-live story based on actual events.  The play has received great reviews and the group is looking to expand the touring calendar throughout the summer.   The Puppies have also played the main stage at the Sasquatch tour and other large venue events and are quickly becoming one of Seattle’s most in-demand groups.

Award honorees included well known community leaders who have served the people of Seattle for decades; as well as shining stars actively making a difference today.

Those recognized at the event:

Each award recipient was introduced by someone who had a personal story of how the award winner had impacted their life.  Afterwards the recipient took the stage to share who had impacted them early in life.  The ceremony was full of humor and laughter, as well as somber moments and tears of gratitude.

The afternoon culminated with the honoring and awarding of the new Robert Stephens, Jr. Community Service plaque which will hang in the Garfield Community Center.

Robert Stephens, Jr. has been a fixture in Seattle’s Central District for over 35 years.  A veteran of the U.S. Army, Mr. Stephens, Jr. began serving the community after completing his tour in 1968.

He has also been involved with a number of non-profit organizations and governmental advisory committees over the years; and has had a hand in the establishment of Odessa Brown Health Clinic, Madrona Dance Studio (now Spectrum), Medgar Evers Swimming Pool, and dozens of other programs that are now an established part of the community.

While presenting the award, GCC Advisory Council Member David Toledo stated “When we began searching for someone that exemplified the community spirit; someone who was a true advocate for our youth, for the arts, and for the neighborhood; we all knew right away that it was time to honor Robert Stephens, Jr.