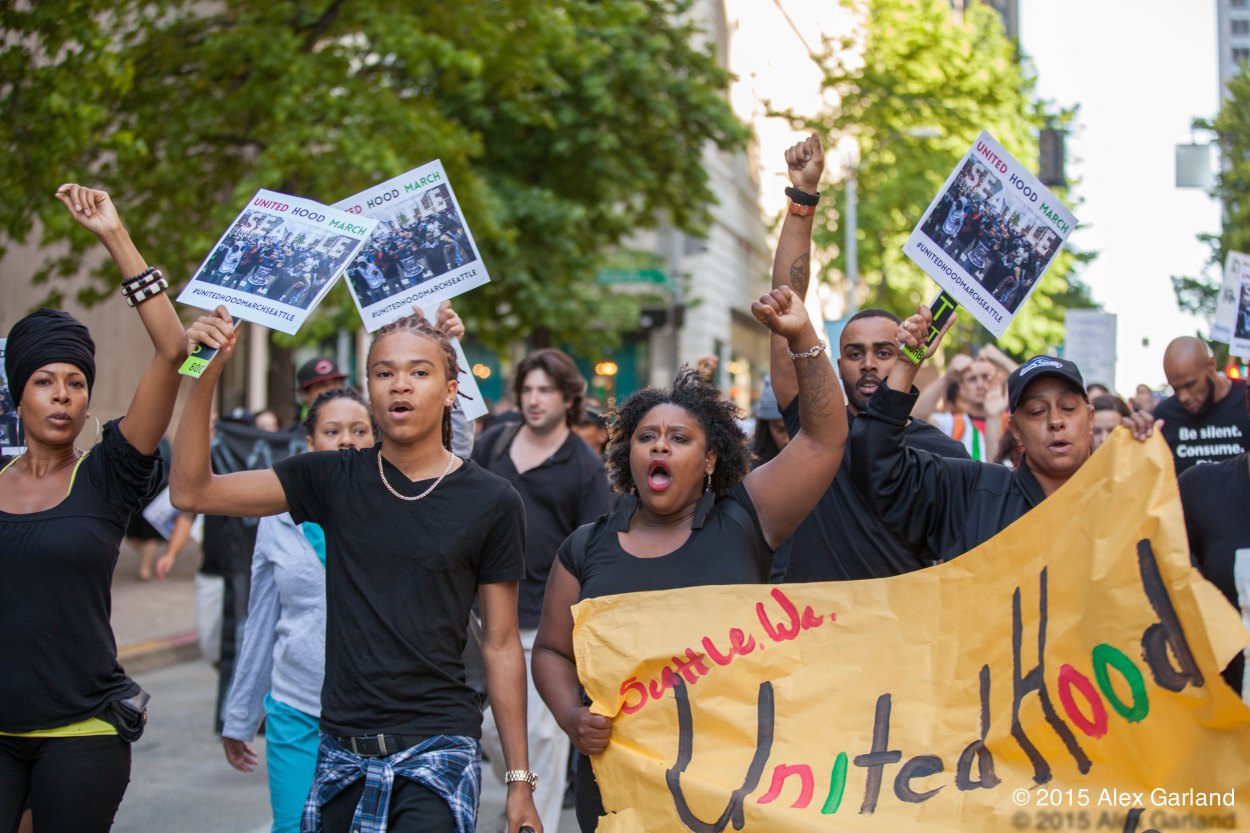 “Family Members, not family feud. You stand with me, I’ll stand with you”. The proclamation of unity rang from Downtown to Belltown Friday evening as over 200 former and current gang members with roots in South Seattle and the Central District joined with their allies to pound the pavement in protest of a “structurally flawed injustice system” and to demand accountability from local elected officials.

They were participating in the United Hood March. Despite the history of gang violence beginning in the 80s, the March brought one-time rivals from south and central Seattle together for a day of reconciliation. In the wake of the tragedy in Charleston and the series of murders that birthed the Black Lives Matter Movement, former enemies marched side by side in solidarity. It was a sight many thought impossible just a few decades ago.

“People hear ‘gang members’ and of course there’s going to be a concern about uproar from many, but this march was heavily thought out. It’s not only highlighting a marginalized group of our society, but a subset of that marginalized group, and that we can come together peacefully. Hopefully it makes people ask the question, “why is there beef between gangs in the first place?”, and turn their attention towards systemic issues we face,” said Michael “Renaissance” Moynihan, who often served as a chant leader for the rally and is now a community organizer and philosophy major after participating in gang life during his early teens.

Moynihan joined those flooding the 600 block of Seattle’s 5th Avenue about 5:00pm, sandwiching themselves between Seattle City Hall and the Seattle Police Department Headquarters.

“We’re here at the two halls of power of the city, demystifying the myth to those in power that we as a people – we as a community – can’t come together,” said Amir Islam, the event’s primary organizer, as he stood a few yards away from over two dozen Seattle police officers deployed to monitor the event.

In a statement, Seattle Police spokesman Drew Fowler said officers were in attendance at the march for “standard public safety”. Officers were additionally charged with blocking off traffic and escorting the assembly through the often precarious downtown streets.

Islam – between job and family obligations – spent the last several weeks“dotting every ‘i’ and crossing every ‘t’,” in obtaining the necessary city permits, to ensure the event would proceed without a hitch. Being fully cognizant the nature of the event would invite some unease, Islam stressed it was important that nothing distract from the showcase of solidarity amongst a community often savaged in society from banding together to send a clear, profound message that the systemic and structural racism rife within the legal system and society at large would not be tolerated any longer.

City Councilmember Kshama Sawant who attended the march echoed this sentiment as she  praised the United Hood March for aiding in a broader movement for radical change of our legal system.

“The fact that we’ve having the United Hood March is a hugely empowering sign. This is a fact that the Black Lives Matter movement won’t be extinguished. We’re building a much better thing than what exists currently. We’re continuing to show that through the civil rights movement to now, decades later, we’re continuing to challenge an entrenched, systemic racism,” asserted Sawant.

The councilmember added she was disappointed none of her other colleagues joined her at the march, as it was critical that local political leadership be present to witness the outcry against a system that they at times help to prop up.

“We needed to let the truth be told that we can repair the damage that’s been done to our communities on our own. I did 17 years for things I did as I gang member in harming my community. This shows there are no wounds that can’t be healed,” said Dwyane Maxted, who along with Islam is the co-founder of the United Hood Movement.

The march commenced after 15 minutes of speeches including one from South End community organizer and King County NAACP past president Sheley Secrest who contended the event was, “More than a moment. This is a movement.”

As the large contingent, accompanied by more than a dozen bicycle officers, charged down Cherry Street and then Fourth Avenue, several onlookers, many waiting at bus stops for their evening commute home, clapped and shouted support for the marchers as they chanted “Black lives matter” and “We are family members.” The marchers actually received a standing ovation from patrons dining at Hotel Monaco’s outdoor patio restaurant as they passed by with signs reading “Black Lives Matter” and “Stop Killing Us.”

Organizers, conscious of the fear of violence the event might evoke because of the involved participants, kept watch to make sure peace was kept at all times. The only incident of note was when a small contingent of anarchists briefly joined the march and suggested they might physically engage with police.

“Look, we basically let them know that the shit that happened at May Day wasn’t going to fly here. We knew what group would take the blame on the news for [the actions of the anarchists],” said an event participant who declined to be named, referring to an incident at this year’s May Day protest in Capitol Hill which saw a clash between the police and anarchist protesters.

On their way to their final destination at Myrtle Edwards park, the marchers took a brief respite at 4th Avenue and Pine for speakers and organizers to re-engage with the crowd, reiterating the fact communities could come together on their own without need for outside forces.

“Police were created as a slave patrol. History doesn’t want to acknowledge this,” community organizer and recent University of Washington law school grad Nikkita Oliver boomed to the crowd over a megaphone at the pit stop.

“We do not need police! We as black people, need to explore our own ways of doing things.There is something terribly wrong with this system, however this system would like us to think there’s something wrong with us,” she concluded.

As the march picked back up, advancing down Western Avenue, some in attendance took time to reflect on its significance.

“This is a good first step. Don’t get me wrong, it’s dope, but we need to be aware that’s what it is. The next step is producing viable alternatives to not only our legal system which imprisons black and brown at a disproportionate rate, but our economic systems as well,” stressed Bypolar Cherub, a community organizer.

Not wanting the event to fall into the category of “just another march,” ultimately bearing nothing, Islam emphasized its function as brick to be added to many future ones in producing a construction of a new paradigm in Seattle’s black community. He recently launched the “United Hood Movement” an organization that will seek to structure future events and community assistance.

The United Hood Movement is currently helping to raise funds for the burial cost of 19 year old Tedra Paige’s unborn child. Paige, who was 5 months pregnant, tragically lost her baby after being shot on the same day as the March took place in an unrelated incident.

“We’re looking to partner with many established organizations, along with creating new ones, in terms of action steps, that strengthens our community financially and spiritually. I think people have come out of a coma in realizing that we are going to have to do for ourselves because no one else will. The time for fighting and discord is over. That’s the statement that was made here today, and what will be reiterated as we move forward,” the community entrepreneur exclaimed after the march’s two mile journey concluded at Myrtle Edwards Park.

Islam named 206 Zulu, Women for Systemic Change and Kingdom’s Embassy as groups the Movement has already built solid relationships with.

This enthusiasm for next steps was shared by many as the march wrapped up, including a very animated Maxted. “People think this is something, all of us coming together today. Well, they ain’t seen nothing yet.”

2 thoughts on “One Hood United: Former, Current Gang Members March Together for Peace”