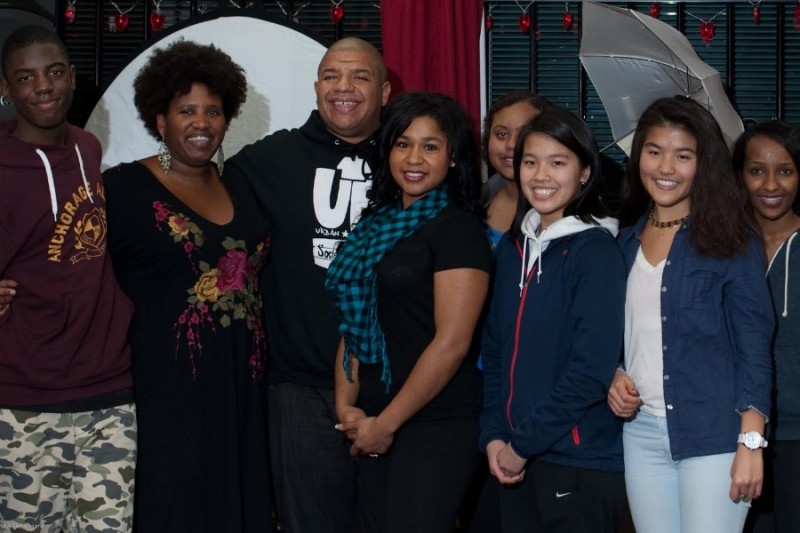 The two most influential forces in my life have been writing and travel. Growing up I always wanted to see the world (any place outside of Wisconsin would do). Just before I turned seventeen, my mother took me Senegal.

It’s strange to think that one month could change my life, but it did. I fell in love with the food, the people, the baobab trees, and the sandy streets. While jarring to wake up to the unfamiliar cries of roosters intermixed with the Muslim call to prayer, I awoke each day feeling more alive and more myself than I ever had.

It’s like simply being somewhere else gave me the freedom to reinvent myself, only I wasn’t becoming someone else, I was becoming the me I really wanted to be. Through it all my journal was my constant companion. I wrote to document each miraculous day and in the writing began to sort through my feelings.

Being raised in a black feminist household made going to school a challenge. While academically I was well equipped to succeed, my values, my interests, my vocabulary, and my natural hair were all completely different from my peers and even my teachers. In middle school and high school being different is usually equated with being wrong.

For one month, though I was a foreigner being different didn’t feel so wrong, it was expected. There was a place for me, a place where people appreciated my accent and my command of the English language, my hair, my body size and shape, my sense of humor. It was a trip that affirmed me and also inspired in me a passion for travel that has yet to be sated.

I spent my junior year of college in Cadiz, Spain. When I went to meet the cohort I would be traveling with it felt like I was pledging a sorority. I went to Spain with 30 white women, 5 men, and 2 other women of color and it was an amazing experience, but one that was clearly not designed with me in mind.

The welcome packet we received included a list of local businesses, the post office, popular cafes, places to shop and places to get your hair cut. Of course there was no one in the small town of Cadiz who knew anything about black hair. I had to travel 8 hours to Madrid to get it braided in an African shop. It may seem like a small thing, but the small things began to add up, like going out with my friends from the cohort and being told I wasn’t an American because I didn’t look like the other girls.

After Spain came Japan. I was placed in one of the largest prefectures on Honshu with 200 other English teachers from around the world, yet I was the only black teacher. In fact, I was the only black teacher in the 13 years the town had been hosting the program. It was a shock for everyone involved when I stepped into the classroom for the first time and was greeted by students screaming and hitting each other in disbelief.

During the two years I taught in Japan, I was met with screams repeatedly. Many of them were excited as opposed to scared, but it took me a while to have enough understanding of Japanese to know the difference. I was also followed around in stores, bitten by an autistic child who thought my skin was made of chocolate, and asked by a woman whose eyes were filled with tears why my mother had left me out in the sun too long.

Through it all, at no point during my travels was there any authority figure or program director who had any interest or relevant experience to help me process why my journey was so very different from everyone else’s. What would it have been like to have felt heard? What would it have been like to have had someone who could help me process the nuances of my experience? For as amazing as my travels have been, how much more enriching would they have been with someone who really got it? These were the questions that led me back to school.

In 2006 I completed my MA in International Education from the SIT Graduate Institute. During my year on campus, the entire International Education Program took a field trip to Boston for the NAFSA conference. I stood in a balcony overlooking a ballroom that held literally thousands of study abroad program directors from around the world.

There I was in my snazzy suit with my resume neatly printed ready to network and find a practicum. As I scanned the room, it was like meeting the other people in the Cadiz program only on a much larger scale. Here again was this sorority of upper middle class do-gooder white women with Guatemalan purses, Kenyan earrings, and Chinese silk scarves accenting their business suits.

There were 7 black women in a room filled with thousands — I counted. Over the next few hours I made a point to meet each and every one of them. Not one of them was a study abroad program director. NOT ONE.

I left feeling disheartened. It’s a feeling that stuck with me. I found a practicum. I completed my thesis. I was even given a chance to lead a few programs, during which I learned a lot. But every job I have ever applied for — even positions in organizations designed to work with youth of color — has been headed by white people. Even if they hire staff entirely made up of people of color, they are the ones who have the final say over the curriculum. And while I don’t wish to disparage the good work they are doing, sometimes who they are gets in the way of their goals.

While increasingly there are more opportunities to go abroad and more people investing financial resources in sending our youth of color abroad, there has not been an equal investment in providing them with experiences that are actually designed to accommodate the complexities of who they are in the world.

Many Voices One Tribe is the culmination my long held dream. It is a study abroad program for youth of color. Our mission is to empower young writers of color to see world, to know themselves, and to define their own futures. We are committed to dismantling oppression, telling our own stories, and creating global community. Travel and writing are the catalyst to a deeper exploration of our identities and our place in the world.

Through this program I am curating a space where youth are invited to bring all of who they are, to share with others, and to find points of solidarity across perceived differences. My goal is to provide well-crafted programming that will take youth to a variety of different countries with different thematic focuses.

But for this year we will start small: One trip, a handful of high school age youth, for two weeks to Veracruz, Mexico. The program itself will last the entire month of July and include workshops on social identity, crafting print and digital media, poetry, POC self care, Spanish language immersion, cross cultural competency building, and more.

Our inaugural voyage will run July 13th-27th. We are still acceptiong donations for our in country excursions here.

This article was originally published on the Seattle Globalist. This updated version has been published with permission.