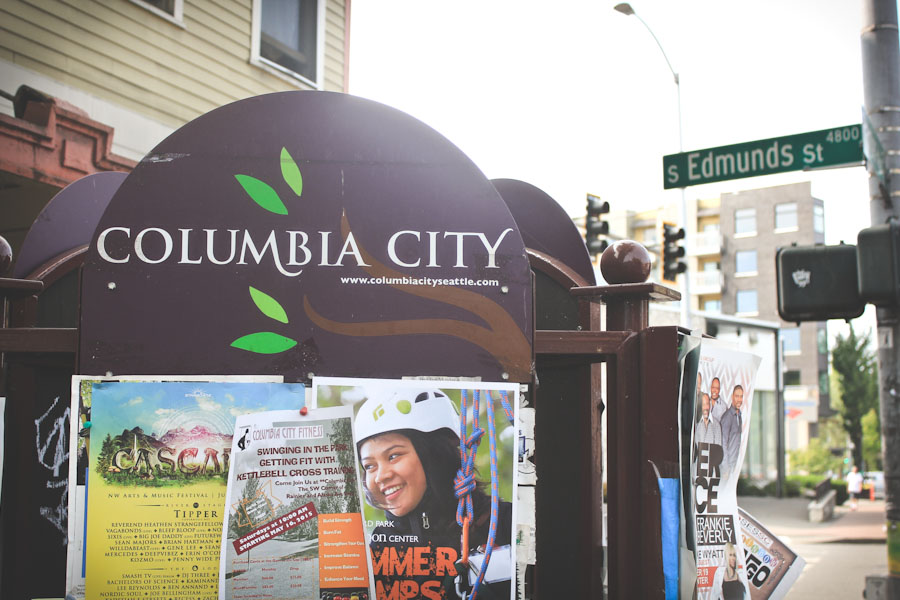 A couple weeks ago I attended “Dismantling Racism: A Community Forum For Southeast Seattle” at the Rainier Valley Cultural Center in Columbia City. The five featured panelists were Black artists/activists from the recent exhibit: “Black Lives Matter: Humanity Not Negotiable.”

When asked to reflect on the top racial issues Seattle faces as a city, two of the panelists didn’t hesitate:

“I just moved to Seattle and I feel like I hear the g-word everywhere,” said Aramis Hamer who hails from Chicago. “I want to put myself in a financial situation where I don’t have to worry about being displaced.”

How we talk about gentrification

Another panelist, Yadesa Bojia, a graphic designer and fine art painter who moved here from Ethiopia in 1995 remembers a warm African community at 23rd Avenue in the Central District replete with barbershops, good food and company.

Now, he said, he’s witnessing the flight of Black families and that warm community fading fast.

The Stranger recently called 23rd and Union “the symbolic heart of the fight against gentrification in Seattle” where the Black population has dropped precipitously from 51 percent to 21 percent over the last two decades.

For sure. It’s hard to have a conversation about gentrification in Seattle nowadays, even as we’re experiencing tremendous population growth and are ranked one of top ten fastest gentrifying cities in the nation.

So many people, so much density, so much growth, so much money — it raises the inevitable question: who gets to stay and who has to go? So racially coded, so controversial.

Try having a conversation about it and we often end up feeling angry and unheard, or avoidant and confused. In a place that always wants to be “nice” about its racial conflicts, the g-word has probably come to evoke as much mental fatigue as the r-word itself (i.e. racism).

But we do ourselves no favors being “Seattle-nice” and not talking about what is obvious to the naked eye.

I stepped outside during “Dismantling Racism” to to take a deep breath and look around. Just east of the 1921 landmark building that houses the Rainier Valley Cultural Center sloped the cool, green grass of Columbia Park. Brick-laid Columbia City Library was perched across the lawn. Up the hill former Columbia Baptist Church, constructed in 1907, and now home to Southside Commons Space for Progress, peeked out from between the trees. Rainier Ave moved a little slower that usual, humming with contented post-dinner traffic.

In the twilight of the summer evening all these longstanding South End fixtures, however, were completely dwarfed by a brand new six-story neighbor — The Angeline Apartments.

The Angeline went up fast with construction beginning mid-2013, but doors on its 193 living units and 30,000 square feet of street level retail already opening this summer. Many expressed shock at the newly advertised apartment rental rates, ranging from $1,755 per month for a studio to $3,265 per month for a 2-bedroom. The building boasts a private theater room, rooftop terrace, fitness center, and anchor commercial tenant PCC Natural Markets — a grocery store with a price point that keeps even middle income families from being able to shop there on a regular basis.

The building’s rapid rise has amplified those awkward conversations about gentrification in Columbia City.

For Randolph Cross, proud member of The Royal Esquire Club, just a few blocks up Rainier Ave, it may not be such a bad thing. The Esquire Club was founded in 1948 by five young Seattle Black men “to promote social and civic betterment in the community, city, state and country.” It moved to Columbia City in 1986. Cross said the club is glad to be part of revitalizing the neighborhood.

“Revitalization brings families and children out into public,” he explained. “People now find this a viable community like the Ballards and Magnolias.”

A Seattle native, Cross grew up in the Madison Valley area, which he loved.

“I remember what [Columbia City] used to be like,” he said, “shady establishments, shady people.”

He’s pleased with the neighborhood changes, and thinks the Angeline is needed development. He says he looks forward to improvements extending further south where he now lives in Rainier Beach.

“They just keep pushing us out”

But other longtime locals disagree. I spoke to one Black woman who went to Rainier Beach high school in the ‘70s and has worked in Columbia City for 20 years. She asked not to be identified for fear of blowback in the neighborhood.

“Suddenly in 2002 they started calling it ‘gentrification,’” she recalled bemusedly, then continued seriously, “All it means to me is pushing Blacks out of one area into another area. They just keep pushing us out.”

She says South End communities get “built up” such that people who were originally living there can no longer afford it. Folks are forced to keep moving south.

She traced the beginning of changes to “Weed and Seed,” a federal program launched by the Department of Justice in 1991 to improve high crime areas in select American cities. “Weed” referred to weeding out criminals and drug dealers, and “seed” referred to social-service programs aimed at nurturing young people.

In 1992 Seattle won a $1.1 million federal law enforcement grant as part of this program. It may or may not have reduced crime, but many cite it as a driving force in displacing the African-American population to smaller cities in south King County. Case in point, in 1990 the City of Renton was around 17 percent people of color (7 percent Black). By 2010 it was 45 percent people of color (10.6 percent Black).

When I asked Randolph Cross about this he conceded, “[Seattle] has a requirement to provide low income housing. But there’s probably not enough and that probably does push people out.”

It’s true the Angeline has placed select apartments in a Multifamily Tax Exemption (MFTE) Program, which requires the building to offer some lower-than-market rates to income eligible families and technically qualifies the building as “mixed income” housing.

But look closely at how that program works: It’s an incentive program. The Angeline gets a 12 year property tax exemption in exchange for renting some of its units to households below the city’s skyrocketing median income. On paper this looks good, but in reality it looks like this: developer Security Properties, which purchased the site in 2011 for $7.18 million, gets a kickback for renting studios for as much as $1,300 a month to people who earn up to $53,380 a year.

Last year The Seattle Times reported that while Seattle median income had soared by general measures, those measures grossly masked the fact that at the same time Black median income in Seattle plummeted to $25,700 — the ninth lowest Black household income in the nation.

Moreover Seattle is the 23rd largest city in the U.S. but has the country’s 4th largest homeless population; a population that grew by a whopping 21 percent from 2014-2015 and is majority people of color, though the city itself is majority White.

While pricey Columbia City apartment complexes like The Angeline and The GreenHouse have swung their doors open wide in the last half decade, it says a lot that simultaneously many cultural hubs of the South End Black community like Angie’s Tavern (now replaced by a seafood and raw bar), have sadly shut their doors.

As Seattle explodes and its coveted communities attract more and more attention, it’s probably inevitable gentrification will continue in places like Columbia City.

Still, in an era of growing a racial awareness perhaps not seen since the civil rights movement, a very simple inevitability also remains. We have to talk about what that g-word really means in the context of race and racism, in our city, and in our own back yards.

Another “Dismantling Racism” event will be held at the Rainier Valley Cultural Center on Thursday, August 13th from 7-9 p.m.