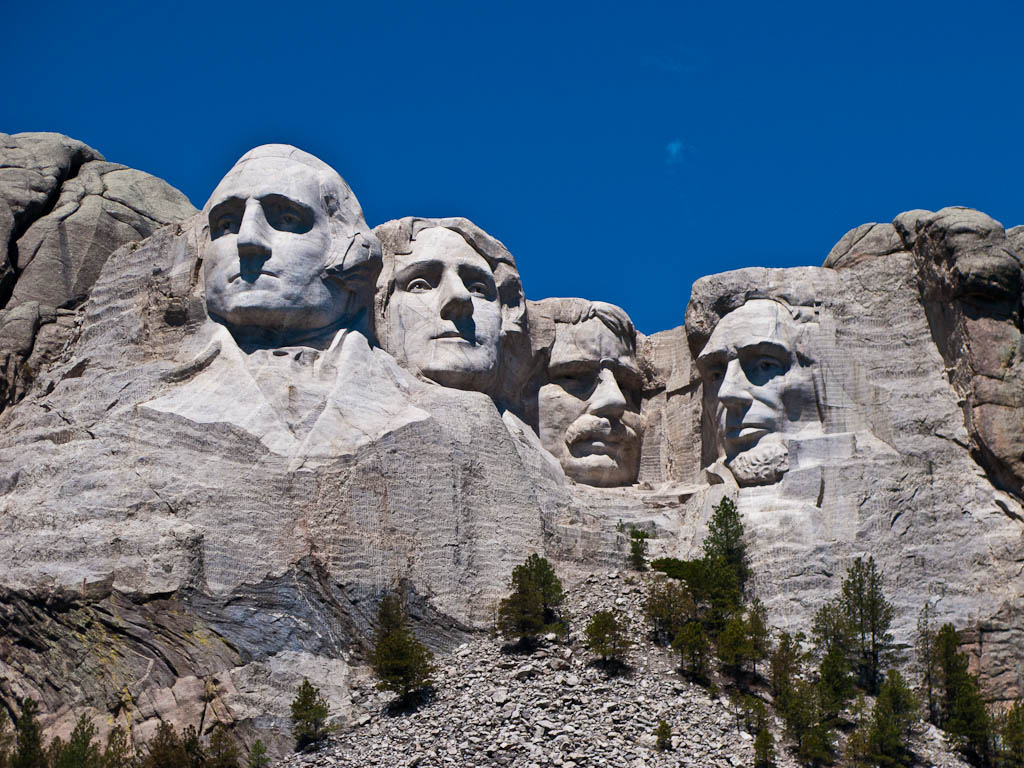 Prior to last week, I hadn’t spent much time thinking about Thomas Jefferson.  Or any of the past presidents of the United States, really.  Presidential history never interested me very much.  Indeed, I often got Jefferson (constitution author, WAS a president) confused with Franklin (electricity, NOT a president).

I said as much to my 6-year-old daughter last week when we rounded the bend in Keystone, SD and got our first glimpse of the smooth, white faces of Mount Rushmore towering about the tiny tourist town.  She knew Washington and Lincoln but wanted to know about the other two.  I didn’t have much more to offer.  I promised we’d get a lot of good information from the exhibits and presentations at the monument.

We did get a lot of information.  Though, in retrospect, I’m not sure I’d call much of it “good”.

When we returned to the hotel I picked up my road trip read, “The History of White People” by Nell Irvin Painter and my previous perceptions of Jefferson, Roosevelt and historical race relations were blown out of the water.  In reading Dr. Painter’s fascinating book I found myself rethinking my attitude toward our founding fathers and the kindness and benefit of the doubt I had previously offered them.

The Mount Rushmore presentations kept using terms like “founding fathers”, “great men” and “creators of democracy”.  At the time, I rolled my eyes a bit, thinking of slavery and the near-extermination of the Native Americans; mentally noting, and commenting to my husband and kids, how much of the story they were leaving out.  How, despite these men’s contributions to democracy and the development of the nation, they still did a lot of bad things and didn’t understand much – if anything – about equality.

But those feeble attempts to shift perspective, I realized in reading Dr. Painter’s book, were painfully inaccurate and inadequate.  I was still way, way too kind to these men.

Somewhere along the line – 8th grade social studies?  9th grade history? – I got the idea that the poor behavior of our founding fathers was the sad result of ignorance.  I absorbed the notion that reprehensible actions like slave owning should be forgiven based on the knowledge available at that time – these men simply didn’t know any better.

I realized that I had been viewing history through the lens of the oppressor, believing that the way powerful white men thought was the way everyone thought.  I had somehow identified ideas of racial equality and freedom as purely modern ones; as though no one even considered the possibly of equal rights for all until Dr. King came on the scene.  “If they’d only known then what we know now,” this belief wistfully whispered in the back of my mind. “They could have been even greater…”

Not so, says Dr. Painter, revealing a very different picture of life in early America.  Rather than a vacuum of dialogue about race and equality, Painter tells of ongoing arguments about race and oppression: persuasive letters and papers exchanged between academics and leaders of the time, powerful speeches asserting the unity of humankind or the inferiority of all non-whites, an ongoing debate about equality of all races.

Early leaders in the United States were unquestionably aware of the idea that all races and genders are equally human and should be treated as such.  Indeed, they denied and disagreed with the idea.  Their racism was not collateral damage of a backward era when no one knew any better.  No.  It was a conscious, well-informed choice.  They were presented with ideas of shared humanity and equal treatment and they chose white, male supremacy instead.

In Painter’s book I was particularly impressed with the writings of David Walker – whose name I’d never previously heard.  Among other things, Walker was an African American living in Boston.  He wrote a powerful tract entitled David Walker’s Appeal: in four articles, together with a preamble, to the couloured citizens of the world, but in particular, and very expressly, to those on the United States of America”.  The content of Walker’s Appeal destroyed my previous perceptions of the novelty of racial equality.  He called out the bloodthirsty, hypocritical, immoral actions of white people in the United States, particularly as slaveholders.  He upheld the righteousness of blacks in the U.S., noting how idiotic it is for whites to imagine blacks desired to be like them and, instead, spoke proudly of the innate value and beauty in being black.

For me, this was a revelation.  I had no idea such thinking existed in 1829.  My perception was of a dark time when even the best and most moral thinkers hadn’t even considered the injustices around them.  Suddenly, the kindness I’d shown to Washington, Jefferson, Roosevelt and all the rich, white men who founded our nation was revealed as yet another aspect of how I have internalized racism. My racist views said that the only opinions that mattered, nay the only opinions that even existed were those of the powerful.  How ignorant and narrow-minded to forget about the thoughts and opinions of those without power: the 2 million slaves, hundreds of thousands of displaced Native Americans and the newly-immigrated Chinese.  I am ashamed at how easily I failed to consider that they even had opinions.

“History is written by the victors”. This is a phrase I thought we, collectively, were working hard to move past and that I, personally, had mostly overcome.  Not so, I realize in reading Dr. Painter’s book.  I have a long way to go in understanding history.  I have a lot of unlearning to do about the morality and heroics of the “great” leaders of this country.  I have a lot to learn from the “other” great leaders in this country: Chief Red Cloud, David Walker, Frederick Douglass, Chief Crazy Horse – and the white scholars and educators who advocated for equality and the humanity of all: William Stanthrope Smith, Franz Boas and others.

I am not a historian and I’m sure many can argue far more eloquently about the nuances and intricacies of our national leaders’ thinking and morality.  My reason my personal re-education is not to win Facebook debates about U.S. founders or to be some kind of expert.  I just want to offer my children a more comprehensive view of history than I received.  I want their perspectives to be informed by the experience of all the people who created this country, whether through writing founding documents or their stolen slave labor; through academic debate or speeches to their war-wearied tribe.

I want to be better prepared the next time my daughters ask me about Jefferson or Roosevelt so I can say something more intelligent, accurate and nuanced.  I’m not yet sure exactly what I’ll say – as I said, I have a lot to learn still.  One thing I know, though: I will tell them the quest for equality and justice for all people has existed since the beginning and our past leaders had the chance to decide where they stood.  Most of the time, for most of history, they’ve chosen injustice and oppression.  And then I’ll say the most important part: “And we also have a choice.  We have the power to do so much better than they did.”