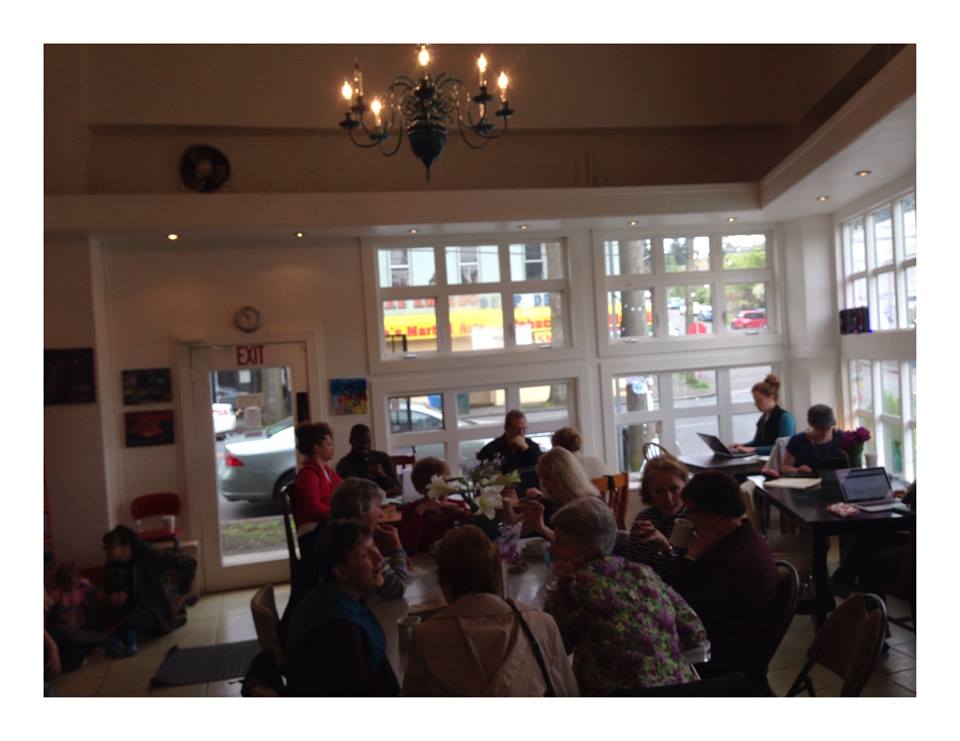 If not for the hundreds swelling its walls, anyone passing by Tin Umbrella Coffee mid-morning of yesterday could have been excused for confusing it with a typical Sunday at the Hillman City java shop. Festive music, the smell of aromatically-pleasing arabica beans freshening the air,  and audible laughter you could hear blocks away on Rainier Avenue South is delightfully common to residents of the immediate area.

After all, the independently owned coffee shop has earned a reputation for being the closest thing Hillman has to a perpetual party hub. However, Sunday’s celebratory atmosphere held a particular significance as the coffee shop that many Hillman City residents view as ”the heart” of the South End neighborhood turned two years old –  a milestone its vivacious owner could barely process.

“Today is like all the holidays wrapped up into one!” exclaimed an effusive Joya Iverson in-between greeting patrons who lined up inside and outside the store to pay homage to the “proud parent” of Tin Umbrella Coffee on its second anniversary.

Iverson, who has owned Tin Umbrella Coffee for the entirety of its two-year existence, said she was overwhelmed by the turnout during Sunday’s four hour celebration which began at 10am and lasted until two.

“I’m just touched by everyone here, whether it’s the people who have gone out of their way to come here today, the regular customers who just stopped by to shake my hand and tell me thank you for having been here and for continuing to be here.  There are even people who are introducing me to their families and to their new babies today,” she gushed.

“She started a renaissance for this area. She’s an inspiration,” said Stephanie Davis, who has been patronizing Tin Umbrella Coffee nearly since its inception.

Davis, like many in the Hillman City neighborhood, credits Iverson’s coffee shop with ushering in a resurgent business community in the once blighted area – one that has seen an array of  businesses including Spinnaker Bay Brewing, Rocket Crossfit, and the recent Seattle-Times-featured Williard & Jacobs Furniture take the place of once vacant and dilapidated buildings that dotted the three-quarters of a mile stretch along Rainier Avenue south which primarily contains its business district.

“You have an idea, and you think it will be cool. You just hope it will work. Now, you see all these other businesses flowering and flourishing here,” said Iverson, who forewent her usual uniform of “coffee-stained couture” for a beige dress with red crochet design for the occasion.

Things were not always so rosy for the Hillman City entrepreneur as she and her shop seemed beset by misfortune early on. Besides the conventional challenges associated with startups such as attracting enough business to keep the doors open, Iverson had physical and emotional hurdles she had to deal with.

While acting as the equivalent of a swiss-army knife for the shop during ten- and sometimes twelve-hour days she also had to deal with trauma resulting from a brain injury sustained in a car accident.

“It was a trial by fire, and I’m glad I went through that because perspective is everything. People say if you knew what you know now would you still have went through with running Tin Umbrella coffee. Probably not, I would probably chicken out. It has literally taken everything I have on any given day to just show up and be here – physically and mentally. It was hard just trying to remember names, trying to not get overwhelmed and overstimulated. It was enough just going home and letting all the emotions out at the end of a rough day,” she shares.

Iverson praises the residents of the Hillman City community as well as her parents for sustaining her and the shop during some very difficult times. It’s the latter who helped her out financially when Tin Umbrella was in dire monetary straits and it looked like it might not make it another day, let alone a two-year birthday.

On this day however, troubled times had receded far in the rearview as those in attendance made clear they were celebrating much more than an affection for the establishment’s unique blends of coffee.

“When you step in here it’s all about being part of the community. You feel immediately included here. That’s what this celebration today is really all about” said Max Nowinski, a barista on shift during the birthday party.

The importance of the two-year-old coffee shop as a vital community hub was echoed by Knic Pfost who, besides being easily Google searchable, recently moved from Ohio.

“Just two minutes ago I was sitting on the opposite side of the table and a woman came in and said ‘Hi, I’m Katherine. She just introduced herself to me right away. I said, ‘Wow this is wonderful. This doesn’t happen in Seattle except at Tin Umbrella Coffee.’ I feel this area of Hillman City has been affected in a positive way by the existence of a coffee shop like this.”

Pfost, who confessed to being somewhat of a vagabond and joined in seranding the shop while Iverson’s dad backed him up on guitar, said the shop is one of the reason’s he is thinking of becoming a permanent resident of Hillman City.

As the day wore on, Iverson turned reflective as she continued to greet customers both new and old with a warm and boisterous laugh which the shop’s regulars know well.

“Ultimately business is just like life. If you find your passion, and you do it with your whole heart, believing in yourself and your community, good things will happen. Right now I’m on this journey with so many amazing people and an amazing community”.