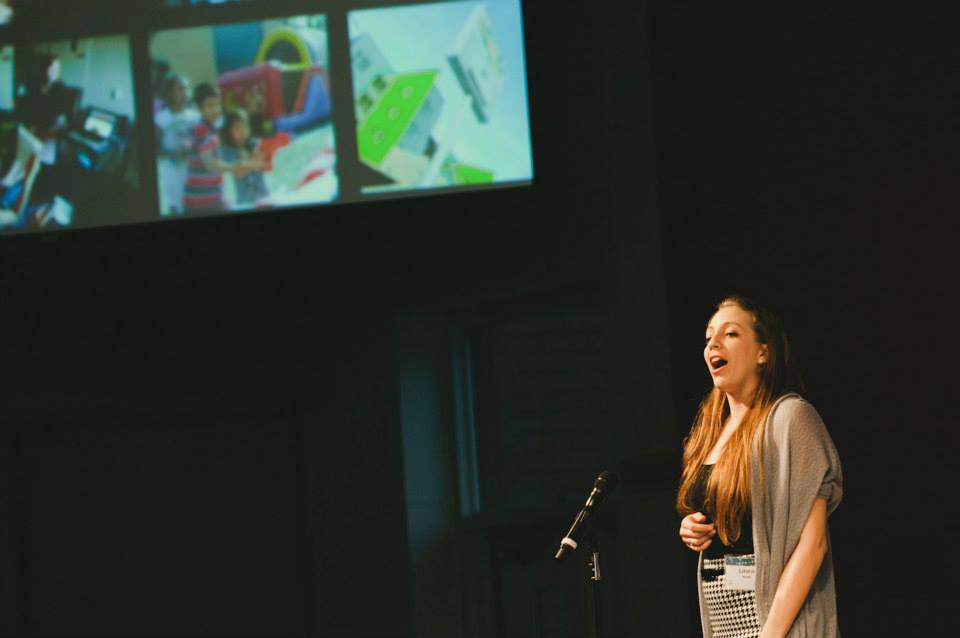 (Note: This is the second in our 15 under 30 series, profiling 15 unsung millennials who are catalyst for social change in the greater Seattle region)

I caught up with Laura Wright-Landrum  shortly after she finished up a 3 mile run underneath the bright lights and raindrops of Rainier Beach High School’s track.

“Courage is sometimes, showing up when you don’t want to,” a sweat drenched Wright told me, depositing her fatigued body in a chair after her exhaustive work out. “So today (courage is) just showing up to the gym to do my 3 mile run and heavy bag workout.”  Wright was in the midst of training for her first ever boxing match, however she took the time to reflect on what brought us together this night: Her continued acts of courage that manifest themselves throughout her expansive work in South Seattle.

Laura works for Urban Impact as their Rainier Beach High School Coordinator. She is currently tasked with facilitating this summer’s Children’s Defense Fund Freedom School taking place at the high school. For Wright- Landrum, this means working countless hours assisting youth involved in the program, ranging from kindergarten to 12th grade, in engaging with community members and city government officials to create systemic and sustainable changes in education.

She’ll be marching with 130 of the scholars in the program tomorrow, to draw attention to the issue of transportation equity in the Rainier Valley. Laura notes that elementary, middle, AND high school students in Seattle Public Schools are expected to walk to school or pay their own bus fare if they live within 2.0 miles of the school. She, along with the Freedom School students, believe this public policy often creates a barrier to getting to school, and therefore a barrier to their education.

Just one example of how she shepherds the movement for creative justice locally. As we speak, I feel like I’m peering beyond the looking glass, an awareness strikes me that her actions represent the greater voice of the South Seattle community.

Last year, in partnership with an organization called Catalyst by Design, and the Seattle Neighborhood Group, she worked with community members to collect stories of folks who live in Rainier Beach at five designated  crime“hotspots” in south Seattle.

These stations offered a chance for community voices to be heard, valued and shared, beyond the Rainier Beach community. This culminated in an event called The Gathering – storytelling project in which community members in response to what is happening within the community.

Community members organized 5 different events in response to the needs that they identified through their own stories, and also celebrated the strength, wisdom, and resources in Rainier Beach. Mayor Ed Murray was so inspired by the event, he had parts of the project featured in City Hall.

Laura shares that courage also means moving on the fly, “stepping into a situation where you don’t always have complete control over, where you have to be vulnerable to another person during your sparring exercises.” Growing up in the small town of Carbondale, Colorado, Laura’s courage, hunger  and desire was recognized early on by one of the most influential people in Laura’s life—her first basketball coach, who spotted Laura’s potential on the playground in third grade. Her coach aided in her transformation over the next eight years, until her junior year in high school, though he’s informally mentored her throughout her life.

Basketball was the avenue that charted her course to Seattle. It wasn’t until she found herself  attending Seattle Pacific University (SPU) after having the opportunity to visit there with the intention of playing basketball that she became acutely aware of her own identity, deeply present in her own rebirthing process.

Laura sought an environment in which she felt alive, and a strong connection to study of sociology. “So much silence surrounding my own origins as well as the origins of my country,” she says in regards to how sociology opened up her eyes.

While she ultimately didn’t end up playing basketball at SPU, this freed her up to focus on other things – mainly her passions for truth, history, and community. She became increasingly aware of the factors and dynamics that exist in society, the interplay of power, privilege,  race and oppression.

During her Junior year of college, Laura read the Autobiography of Malcolm X, a book that changed her life, and brought her a visceral experience of race in America. She looked around her class at Seattle Pacific University and was angry because she saw nothing but apathy around her. This book, engulfed in the understanding that assimilation is not the ultimate goal of race relations and community development, introduced to her the question: “What different aspects of the civil rights movement should we strive create?” She list The Autobiography of Assata Shakur, and The Warmth of Other Suns, by Isabel Wilkerson as other influential books.

Her first experience with white flight was in Camden, New Jersey, where she experienced the devastation, but also the resilience of communities of color in America. “So much of our society has a stronger voice speaking about our communities than the actual members of the community.”

The Urban Family Center in Skyway, she says, was the first place that truly invested in her as a leader in ways that allowed her to see the impact she could have on the world. The  recalls  that the moment she believed in herself as a leader came only after others had already invested in her as one, and “that’s been one of my hardest lessons.”

She originally found herself needing validation through her work and a yearning for belonging. This forced her to make some decisions about some relationships in her life and led her to determine her worth as not deriving from other people, but being embedded in faith—that she is a creation of God. She  says she now feels so much joy in her life. Her friends say that she is passionate, a truth seeker, and always moving. Likewise, she feels lucky to be surrounded by them,  as they inspire her daily. “I feel a strong sense of belonging and purpose in the work that I do, I mean I don’t make a lot of money.”

In the end, she wants her life to be more outspoken than her words. “At the end of my life, I hope that my actions can speak for themselves.”  She continually engages with her work, her spirit, her faith, with her whole heart – engaging with the world from a place of purpose. I also asked her one thing she would say to anyone who is feeling stuck, trapped, lost, or having trouble sifting through and making sense of what’s going on in their life. She thought about it for a moment and said: “Move! Trust movement, trust the freedom that comes with movement. Staying connected to those solid friendships. Sometimes there is a resting period, where something is growing, a period of months. These resting moments are crucial to growth. Discerning is what the growth is.” She sees this often when working with youth and encourages us to experience these moments as movement too.