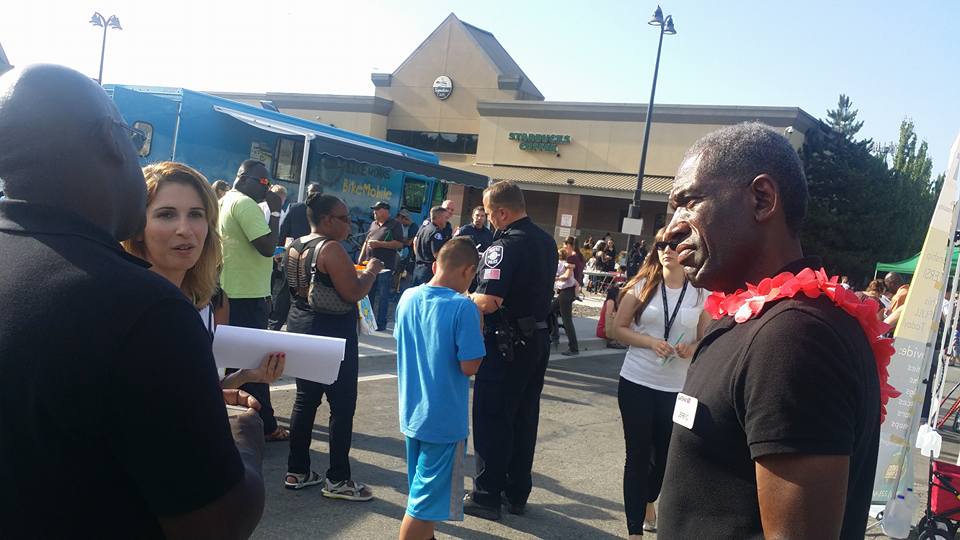 Residents across the South End opened up the doors of their homes and businesses yesterday evening to their neighbors for community “National Night Out 2015” celebrations that spanned South Seattle neighborhoods from Mt. Baker to Skyway. The event, now in its thirty-first year, historically functioned to raise local awareness of public safety programs. However, recent years have seen it recast as a community-building event, something many South Enders who attended the Night Out events could not appreciate more. “Today is about unity,” said Alesia Cannady, “We’re here one for another. Like they say, a chain is much stronger when it’s linked together. That’s what this day represents in our community.” Cannady, who attended a Night Out block party hosted at a residence in West Hill’s Skyway neighborhood, joined in a familiar refrain of other South Enders who saw it as an opportunity for community enrichment.

“(The Night Out) keeps the community together,” said Marjorie Lindberg, a Skyway resident. “It’s so nice just being with neighbors and everyone. I remember at past Night Outs when we used to close off the streets and let kids run around. Those were the days and it’s nice to see that coming back.”

While several residents invited neighbors into their homes for first aid packets, games and desserts, the night’s biggest celebration took place in Rainier Beach where more than 300 people, including Seattle Mayor Ed Murray, gathered together in the Rainier Beach Safeway’s parking lot for live music, giant chess and some much needed collective fun. “With everything that’s kind of happened in the last few days, and the beating this area’s taken in the media recently, it was good to focus on the positive. There’s a lot of it in this community,” said John Aaron, a Rainier View resident who attended the event after passing by Rainier Avenue and seeing the swarm of people taking part in the festivities. Aaron spoke in reference to the spat of violence that has recently taken place in the area, including the death of a 20-year-old on Friday in a driveby shooting. He shared that the people who attended Night Out events showed the resilience of the community and its willingness to not allow itself to be shrouded in negativity, an opinion echoed by others. “This was a real awesome turnout,” said Barb Biondo of the Seattle Neighborhood Group, who helped plan the event. Biondo continued: “This turnout is what I think of when I think about the South End. Strong, multiethnic people coming together and enjoying this beautiful neighborhood and each other. The violence that happens – and it happens in other places too – is not the defining characteristic of this neighborhood and I don’t think it ever was, to be quite honest.” Featured photo courtesy of Rainier Beach Square