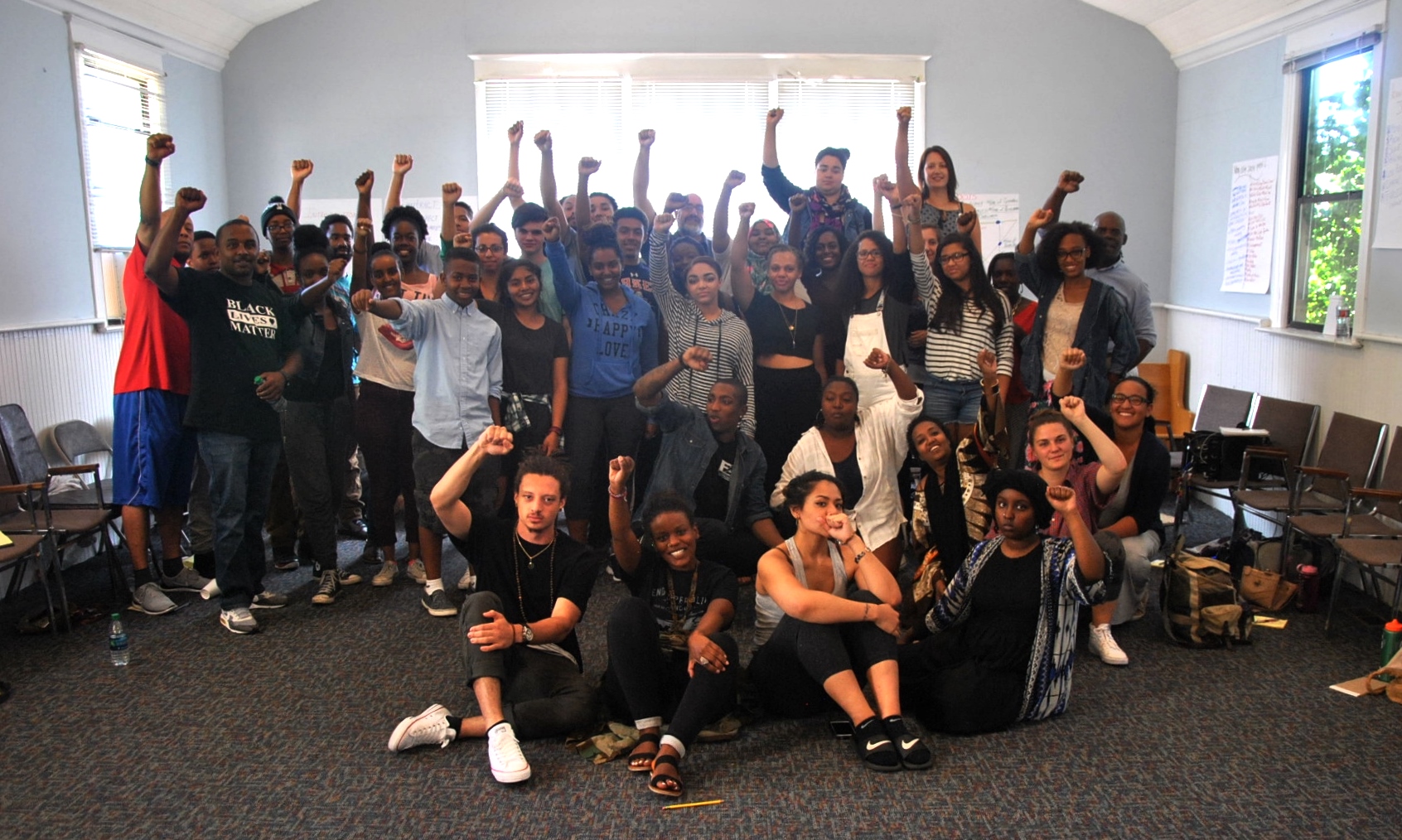 In a long, sunny room in Beacon Hill’s Bethany United Church, a struggle is taking place. One by one, students sitting against the walls try their hands, diving into the middle of the room to wrestle mightily with the thing. One by one they stand up, stretch their shoulders, and try to wrap their arms around it. But every student stays firmly planted in their chair. And the sweat that stands out is not the sweat of physical exertion, but mental effort. The thing they try to wrap their arms around is not a physical foe, but a shadow. A presence. Something, they attest one by one, that has followed them throughout their lives.

The thing is race, and the structures of class and privilege built around it over generations. The work is to put a finger on it – indeed to wrap a whole mental hand around it – and to find a way to talk in some sort of shared language about it.

In fact, the struggle is a discussion, where students take turns volunteering answers to questions posed by moderators, who also take turns leading the group. One starts the discussion off with  “Why do you think it’s urgent to undo racism?” Another follows with, “What do you like about your race?”

The questions elicit deep thought from the participants, and answers both eloquent and frank.

Asked to define racism, 13 year-old Robel McCarthy, from the Othello neighborhood, turns to an analogy.

“It’s kind of like an old lady who doesn’t want to move out of her house – the way she knows life, it’s stuck to her,” Robel says. “I feel like that’s what’s happening to America, because we’re afraid to change.”

The session, held Wednesday, brought to a close the 14th consecutive year of the Seattle Tyree Scott Freedom School. Re-started in 2001 after operating for several years in the late 1990’s. The Freedom School is put on by the American Friends Service Committee twice each year – once in summer and once during students’ winter break from regular school. This year, the summer session lasted only three days instead of five, as it has in the past, said Devan Rogers, a returning student who also helped lead the day’s discussion.

The shorter sessions, Rogers said, help students attend even if they have jobs – and make sure more of them make it to the final day, when ideas from previous days are drawn together, hopefully inspiring participants to become advocates against racism in their own communities.

“It’s important that we all have a collective definition of racism,” Dustin Washington said to the assembled group of about 40 participants. The Freedom School sessions, Washington explained later, are designed to give participants the tools to analyze and talk about the dynamics of race and racism they see around them every day. By providing a forum for them to wrestle with the big topics, along with moderators who help guide the discussions, the hope is that students will start to see deeper connections between societal ills like mass incarceration, education disparities, overstretched policing, and media stereotypes.

The students in this summer’s session ranged from young teenagers to men and women in their twenties, in addition to a handful of older participants. Moderators mapped each discussion onto large sheets of paper. After three days the walls behind the students were lined with posters about everything from media stereotypes to redlining – a post-World War II policy that determined eligibility for home loans based on an applicant’s address, systematically denying credit to most Black neighborhoods and setting generations of African Americans back in starting businesses and attending college.

Christian Paige, 22, traveled from Everett to attend the session, his first, which he heard about from a friend. When he decided to attend, Paige said, he thought it would be a chance for professional development, and to build his cultural competency. Instead, he said, he was surprised to find discussions about everything from power structures to stereotypes in the media.

Pointing to a map showing a drawing of a neighborhood, Paige related a discussion from one of the previous days, when the group had talked about how communities are shaped by outside forces. Paige said he hadn’t realized how those forces can decide a lot about what a community looks like, filling it with the things drawn on the poster – like payday lenders and abandoned buildings – instead of things like grocery stores selling healthy food. Both redlining and food deserts were covered in the session.

This summer, students at the session also got the chance to put their new ideas into action before the session even ended. After Wednesday’s discussion, the American Friends Service Committee held a joint press conference with groups including the Seattle chapter of the NAACP to voice their objection to a “new youth jail” slated to be built in Capitol Hill’s Squire Park neighborhood. Leaders from the groups responded to the findings – and then students got a chance to speak.

Instead of a “new youth jail”, the students told reporters for KIRO 7 and other media, the money – about $210 million – should be spent on programs that help rehabilitate young offenders, or programs that keep youth off the streets in the first place. Along with simple suggestions – like funding basketball or dance programs – students also criticized existing programs, including school curricula, that don’t relate to their own lives.

“STEM’s not for everyone,” said Acasia Smith, using the popular shorthand for Science, Technology, and Math. “ I was told that if I went into a STEM field I would make a lot of money to support my family. But I don’t like STEM. I like to write.”

The press conference was important for the students, Washington said, because the point of the Freedom School is action. For all the passion of the discussions, the goal is “helping them get a sense of their own power to bring forth change.” To that end, after the Freedom School ends this year, a new program starts – Young Organizers, or just Y.O., which is what the facilitators call it.  At Y.O. the students will be encouraged to take the ideas imparted on them at the Freedom School and become organizers and agents of change in their own communities

For all the day’s seriousness, the students are still teenagers. At the press conference, the deadly earnestness of hardcore activism was pierced by a raucous energy. When a banner was unfurled, one young woman popped out in front, holding her phone up and craning her neck for the obligatory group selfie, with a whooped instruction to “turn up!” Later, just as the cameras start to roll, a voice pipes up from the back: “Buy my mixtape!”

One thought on “At Beacon Hill Freedom School, Students Build to Take Apart”