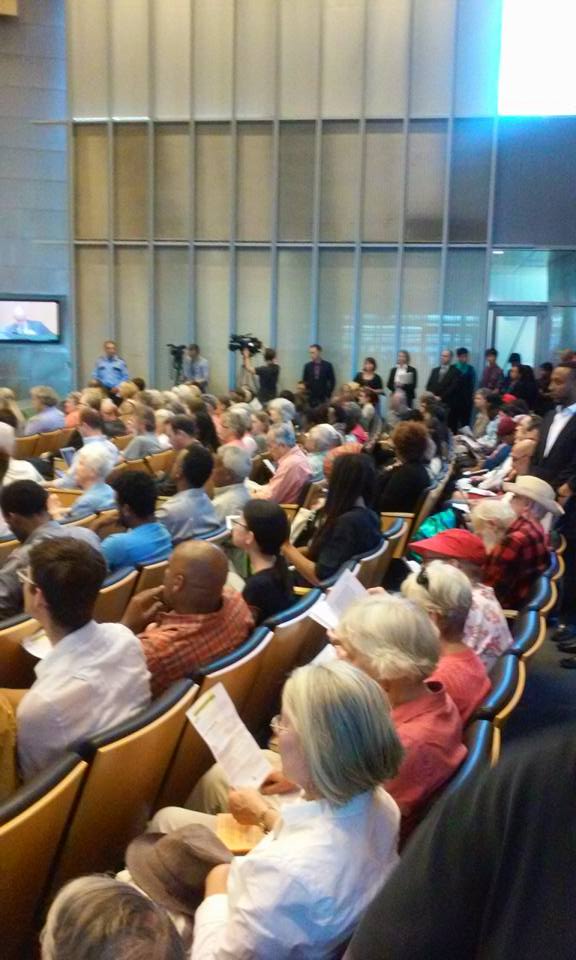 The City Council chamber was standing room only. Though there was no pending vote or corresponding agenda item, Hookah Lounge owners, along with activists from East African communities and organizations including the NAACP, EPIC, YUIR, and European Dissent joined together to publicly address Mayor Ed Murray’s recent ban on Hookah Lounges.

“Far too many smoking lounges attract and sustain illegal, violent activity that has no place in our neighborhoods,” said Mayor Murray in a press conference two weeks ago announcing the ban, that effective  August 16, will shut down Seattle’s 11 Hookah Lounges. The City Council added an additional 20 minute public comment session to their meeting to accommodate the discussion.

The ban comes in the wake of the death of International District Community Leader Donnie Chin. Chin, an outspoken proponent of shutting down Hookah lounges, was shot and killed on July 23 while driving near King’s Hookah Lounge. Though investigators do not believe that Chin was the target of the shooting and the Lounge itself had been closed for two hours before the incident occurred, his death has been a galvanizing catalyst for the closure of late night Hookah lounges.

“One of the reasons why I am here is that I am forever confused about how Seattle chooses to apply an implement the law,” said attorney James Bible who was greeted by a rain of snaps seconding the sentiment. “What’s happening in this situation is the criminalization of black businesses. I say that because they followed every single rule that they needed to follow to open the Hookahs.”

According to a press release from the Mayor’s office, criminal charges are being filed against King’s Hookah Lounge on the basis of non-payment of taxes. However the other ten establishments have seemingly complied with every law put before them.

“Why is a liberal city coming up with a plan to eliminate black owned businesses?” asked King County NAACP President Gerald Hankerson. “I have yet to see one shred of evidence that the Hookah Lounges are the cause of violence.”

One by one activists and Lounge owners approached the microphone, each with a clear message that while there is no denying the crime taking place in certain areas of the city there is also no direct evidence holding Hookah Lounges to blame. They addressed a range of issues from health impacts to economic factors, but the reoccurring theme was race.

“We have to look at racism,” said Jennifer Hagedorn, a health professional and anti-racist organizer with European Dissent.  “As a white person I am clear that white owned businesses, like private clubs, including cigar lounges would never be targeted in this manner.”

Hagedorn concluded with a recommendation:  “I strongly urge you to honor the city’s own policy of doing a racial equity assessment and specifically conduct an assessment rooted in accountability to the communities that will be most effect by this action.”

Present, but notably silent were several activists from the International District community. They were not carrying Stop Blaming Hookah Lounge signs and though it was clear that they came with a different perspective, they chose not to speak during public comment.

“We don’t want this to be something that’s going to create divisiveness across communities,” explained Elaine Ishihara as the crowd dispersed. Ishihara Director of the Asian Pacific Island Coalition Against Tobacco in Seattle has spent the past 10 years working on issues of health disparities and tobacco control issues in communities of color.

“It shouldn’t have to be left up to the community to be having to facilitate all this. It’s not just about the Hookah Lounges it’s just the environment, the cultural environment and going back to social and health justice and being able to work together to address this,” said Ishihara.

Though the impact of this meeting has yet to be determined, it’s clear that there is a genuine desire for dialogue on how to solve the real issues impacting the intersecting communities and to come up with a solution that doesn’t involve taking away the livelihood of several East African families.