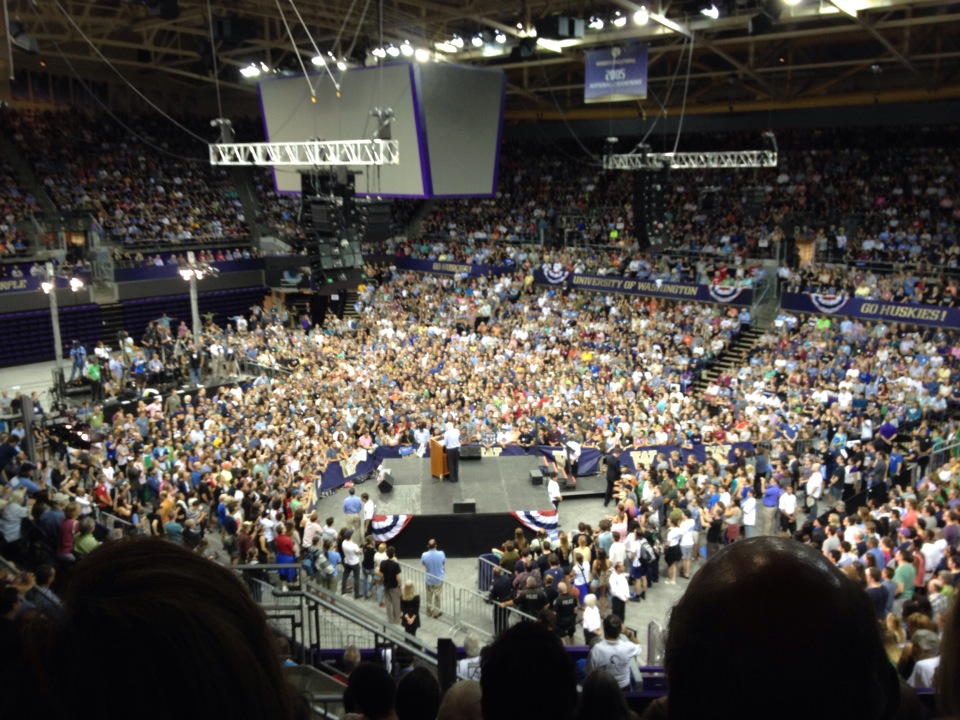 (Note: This is one in a trio of essays the Emerald solicited on Saturday’s interruption of Bernie Sanders at a downtown rally by members of Seattle’s Black Lives Matter movement, you can read the other two here and here.)

Waiting in line to see Bernie Sanders rally at the Alaska Airlines arena, I get a text about the rally at Westlake: the Black Lives Movement took over the stage and wouldn’t let Bernie speak. My gut reaction is annoyance and anger; why did they shut down Bernie’s rally? Don’t they know he’s the candidate most likely to actually address the issues they care about? Why didn’t they pull that kind of stage-hijacking stunt at a Donald Trump event? I say as much to my wife, disgustedly. She listens without saying anything, looking at me. Maybe there’s something more to it than what you know? Indeed, there is.

“Welcome to the Bus!” We find our seats after an oddly warm greeting from the Metro driver, noting a few people holding Bernie Sanders signs on the way to the rally at UW. Up front, someone’s liberal grandparents are discussing the candidate’s various policies with a toothless woman who is obviously delighted to see the event. “I want to know his position on Palestine,” grandpa says. I double take – he’s a dead ringer for Bernie. The toothless woman tells him, “I hope I don’t offend you, but you look just like Bernie Sanders! But with better hair.” He chuckles and everyone laughs. Discussion ensues on the hairstyles of various candidates, with special mention of a famous politician’s $500 haircut a few years back. Who was that again? “John Edwards,” pipes the guy a seat back. The mood is jovial, anticipatory. In front of me sits an orange corduroy suited man with dyed, thinning hair seemingly inspired by Weird Al Yankovic and a rainbow troll doll. He observes that Donald Trump’s hair “looks like an animal died on his head.” I whisper something snarky to my wife about glass houses and throwing stones. She winces, says nothing. The bus driver peppers in commentary, asking the Bus is they are excited to see the rally. Whoops and applause. Then, he leads the Bus in a chant of “Bernie, Bernie, Bernie!” He is excited too. Rolling up to the stop outside Husky Stadium, he bids us goodbye and clarifies, “For the record, as an employee of Metro King County, I hold no personal opinion and maintain completely neutrality on all political matters.” Laughter spills out of the bus as we disembark. Amidst the discussion of hair and Palestine, of course, nobody mentions Black Lives Matter.

Regarding BLM, when you believe your cause to be of dire urgency while your continued shouts remain unheard, you have to resort to an extreme measure. That measure must be taken amidst the very people who are most likely to support your cause, even if it pisses them off.

Streams of progressive peoples coalesce into a line stretching from the Alaska Airlines arena around Husky Stadium, those of us the BLM movement called useless in supporting racial justice. Ouch. Signature gatherers swarm the line, “Have you signed our petition to reduce climate change? Do you support rent control?” Heading into the arena, I wonder what Bernie will say about race.

Climbing the stairs into the upper tier, we find our seats. Rather, they find us. A middle-aged liberal mama bear waves us over, “Y’all need some seats? We got two right here.” Settling in, I overhear the discussion with her friend, “You hear about that guy from the bottled water company who said everyone should have to pay for drinking water? Asshole. I’d punch em in the face if I ever saw em.” Glancing over, I smile. “Oh, I’d do it, too, don’t you doubt that.” Over her glasses, her look assures me she would, indeed, do just such a thing. Thus, we are introduced to Marian. The arena fills to the rafters, sweltering with 12,000 bodies, all waiting. Needing water, I wonder if the concession stands take credit cards. Marian pulls a twenty out of her wallet, “Here, honey, buy whatever you want.” Humbled, I accept. Returning, she tells us she worked in a correctional facility for a spell and is disgusted by what the drug war is doing to this country. We discuss politics further. I show her statistics I had pulled for my previous article on the Republican debate, noting how infrequently the candidates mentioned the poor, income inequality, and race compared to illegal immigration, Obama, and war. She shakes her head, disgusted. “Those mother*****s. I better stop. I’m gonna get myself in trouble.” I remark, jokingly, that I doubt she ever gets in trouble. “Honey, I get in trouble all the time! Listen…” She tells us that she works for a regulatory agency locally that recently concluded an investigation to shut down a retirement home for neglect and abuse. Apparently, in a meeting discussing what the legal repercussions would be for the man responsible, she suggested, “We oughta just shoot em. And that’s why I can’t say the word ‘gun’ at work anymore.” She throws up her hands.

Back to BLM, in prisons across the country, a disproportionate number of black people languish under drug sentences that exceed the likely penalty that man will receive. A traffic stop or a confrontation over selling loose cigarettes can end in death. What will Bernie say to address this?

Finally, the introductory speakers hit the stage, each greeted with crackling excitement and the hail of 24,000 hands clapping together. They don’t need to fire up the audience; merely set them loose. Each statement is concluded with a riot of support, drowning out the speakers at every instance before they can move on. A clear theme runs through their speeches: Black Lives Matter. Each speaker nails it from a different angle; the crowd roars in approval. The president of the Washington Labor Council punches it out with authority: “We know we have to commit to justice. Black Lives Matter.”

Bernie takes the stage. The arena explodes. “BERNIE! BERNIE! BERNIE!” From the nosebleed seats feet stomp in a rolling drumbeat that reverberates through my chest.

Amidst his calls for addressing economic equality, providing free college tuition, getting big money out of politics, and all the other progressive darlings, there it is: “No president will fight harder for racial justice than I do. Period.” He lays out his case for ending mass incarceration (Marian whoops), bolstering the Voting Rights Act, ending the war on drugs, ending mandatory minimums, enacting federal jobs programs to combat the high rates of unemployment that black youth face, among others.

Hugely, the next day, before a rally in Portland, Bernie Sanders’ campaign puts forth a comprehensive statement detailing his racial justice platform, which is aimed at combatting, “the four central types of violence waged against black and brown Americans: physical, political, legal and economic.”

The Black Lives Movement pissed off and inconvenienced some people in Seattle who went to the Westlake rally and waited hours to hear Bernie speak. So what? Black people in America have waited centuries to have their grievances heard and addressed. The rhetoric of the protestors is distasteful to many people, who don’t like being called useless false liberals and part of a racist system. So what? When a candidate like Bernie Sanders calls for policies like ending mass incarceration, they’ll cheer and support for it, as they should.

Back in the arena, Bernie is closing and it’s a fever pitch revival. My wife and I, Marian, the girl on my left screaming me into early hearing loss, and 12,000 other people from Seattle are all standing and clapping and stomping together to hear the words of a man we believe can change the country. We hear his message, his words, and the words thrust forward by two black women hours before at Westlake. And we agree: Black Lives Matter.

2 thoughts on “I Don’t Care That You Pissed Us Off, BLM, Thanks for Doing It!”