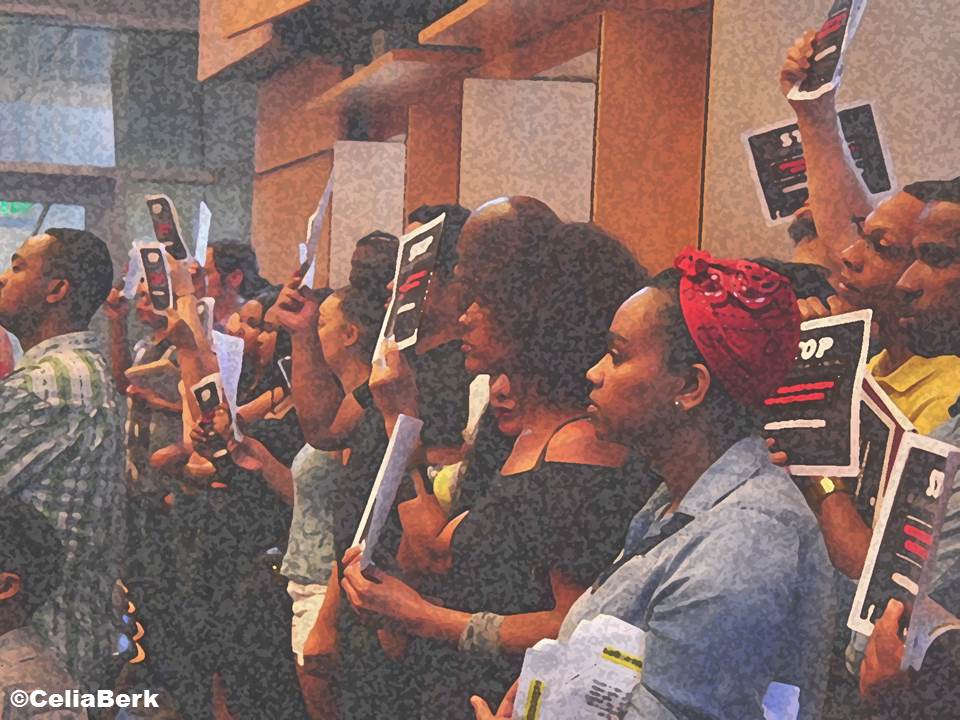 ( Note: A copy of the following letter was presented to Seattle City Councilmembers during the public comment portion of Monday, August 17th’s city council meeting.)

As people of color in Seattle, many of us are grieving the loss of our loved ones to violence in recent weeks. Donnie Chin, beloved champion of community safety in the International District, was killed by gun violence on July 23rd.  Our African-American community is also grieving the loss of so many of its youth, whose promise and potential were not fully realized:  On July 2, 30-year-old Torrence Phillips was killed by gun violence in Seattle’s Central District.  On July 30, 20-year-old Muldhata Dawud was killed by gun violence in Federal Way.  The next day, while returning from Muldhata’s funeral service, his friend, 20-year-old Zakariya Ibrahim Issa, was shot and killed while talking to his mother on his cell phone.   These are just a few of the names of people we have lost – each of them someone’s child, someone’s nephew, someone’s loved one.

Adding injury to our grief, the City has taken advantage of our pain and suffering to push an agenda that would do nothing to stop the violence that is killing our people. Because Donnie died in the area of King’s Hookah Lounge, in the International District, Mayor Ed Murray saw and exploited an opening to achieve the City’s longstanding goal of shutting down all hookah lounges in Seattle. This was not what Asian-American leaders demanded. By announcing the City’s crackdown on hookah lounges and linking these businesses to the deaths of Donnie and recent deaths in the African-American community, the Mayor has publically blamed an entire class of small, largely Middle Eastern and East African-owned businesses as the root causes of violence.  Mayor Murray’s divisive actions have made shameful political use of the grief and the pain that we are experiencing in the African-American and the Asian-American communities. His political opportunism is not uniting us but it is dividing these communities of color in our time of mourning. By blaming hookah lounges for this violence, Mayor Murray is diverting attention away from the City’s longtime neglect of these communities of color and the City’s obligation to work with these communities as we address violence. As a result of the Mayor’s actions, rumors, misinformation, and mistrust have spread like wildfire. But our communities know one thing for certain: the problem of violence existed long before the first hookah lounge ever opened its doors in Seattle.

To rise above the divisive impacts of this reckless political maneuvering, we are writing this, a love letter to our beloved communities.  This is a love letter to our Asian-American brothers and sisters.  It is a love letter to our African-American brothers and sisters, which includes both the East-African immigrant communities and the native-born Black community.  We can no longer see ourselves as separate and different – this is what systems of oppression want us to do.  Our communities of color must come together to build understanding and a united front for systemic solutions to violence.  We want to talk openly and honestly with each other about what violence really looks like in our communities, why it’s happening, and what we can do together to end it.

Here are some things we could talk about:

When one mourns, we all mourn. Donnie’s death has devastated the International District community. The deaths of Torrence, Muldhata and Zakariya, and countless other young Black lives in recent months, have left huge holes in the hearts of their families and in the African-American community.  We are in mourning together. We can respond by uniting to address the root causes of violence; not the symptoms.

All of our communities – Asian-Americans and African-Americans – share a strong tradition of respect for and connection to our elders. We young people need and honor our elders. We elders need and uphold our young people. We know that we have disagreements across generational divides, but we can overcome these if we take the time to talk and to listen to each other with love and respect.

Seattle has a history of unity and struggle among Black and Asian American communities. The legacy of that history is alive today in the gains we have made together through combined, multiracial struggle. In the ‘60s and ‘70s we stood together to demand an end to job discrimination, to push for affordable housing and for culturally competent social services. Many of us grew up together in the Central District or on Beacon Hill. Our children go to school together now. Healing means not only understanding each other’s suffering and pain, but also building up our hopes and dreams together.

Gun violence is not natural to any of our communities. It is a symptom of systemic racism. Segregation, poverty, lack of jobs, discriminatory policing, failing public schools, gentrification, and the proliferation of handguns – these all contribute to violence. We are all affected by it, but Black communities have been injured the most deeply. Our experiences of violence are different, but the root causes are the same. Talking honestly and listening to each other’s stories of how we have been affected by those root causes – by being displaced from our homes, exploited in our jobs, discriminated against by the institutions that are supposed to serve us, etc. – will help to build common cause across the boundaries that divide us – race, generation, class, gender, immigration status, and sexual orientation. Together we can create a vision for peace and justice.

Seattle has a rich history of multiracial political unity. We want to build on that history, refusing to be divided, so we can find ways to move forward together.

Please unite with us in this effort.

One thought on “A Love Letter to Our Communities: When One Mourns, We All Mourn”