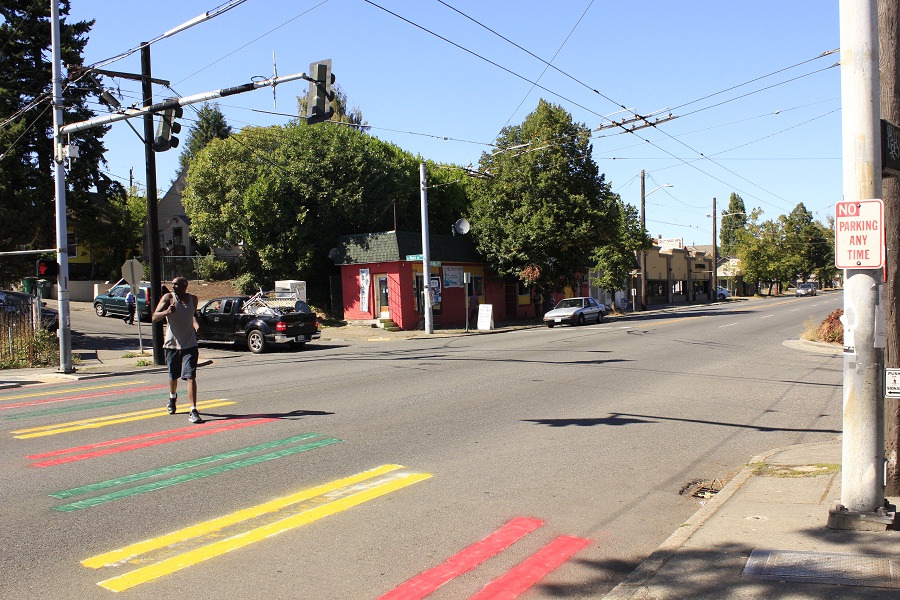 A crosswalk in Rainier Beach was repainted with the Ethiopian colors green, yellow, and red early Monday morning.

This effort seems to be a continuation of the pan-African flag-themed paint jobs that happened in the Central District a few weeks ago.

The crosswalk, located on Rainier Avenue South at South Rose Street, is close to several East African businesses and the Ethiopian Community Center.

According to notes posted nearby, the aim was to raise concerns about gun violence, gentrification and incarceration.

“In honor of: Heavenly Marvee Paige, who never got the chance to be born, may your life never be forgotten,” read the note, referring to unborn baby killed at a bus stop when pregnant teen Tedra Paige was shot at the intersection in June.

The note signed “From the Black lives Matter and African Revolutionaries” went on to say, “The Ethiopian community stands strong against violence of any kind, whether it be by weapons or other systems of oppression including gentrification and incarceration.”

However, the Ethiopian flag-inspired Pan-African colors may not have been well-received by others who’ve already attempted to paint the crosswalk back to white. It’s unknown who executed the counter-action.

At the time of a brief phone interview Monday afternoon, the city didn’t appear to be aware of either alteration to the Rainier Beach crosswalk, according to Marybeth Turner, the City of Seattle Department of Transportation (SDOT) public relations supervisor.

“We are setting up a process so that people who want to paint their crosswalk will be able to do that,” Turner said, explaining that SDOT has standard safety criteria that crosswalk designs must meet.

Turner followed up to say that the new design process would be ready by this Fall.

Rainbow-colored crosswalks unveiled by Mayor Ed Murray on Capitol Hill in June were intended to mark the current diversity-accepting nature of that neighborhood. The red, black and green crosswalk makeovers in the Central District were painted by United Hood Movement volunteers to recognize the legacy of African-Americans in that neighborhood. The city later altered them, keeping the colors, but adding reflective white strips to comply with safety regulations.

Green, yellow and red are the colors that adorn the Ethiopian flag, and were adopted by several other African countries in different forms upon gaining independence from colonial rule. They’re considered Pan-African Colors, like the red, black and green Pan-African Flag, which is more associated with African-American heritage.