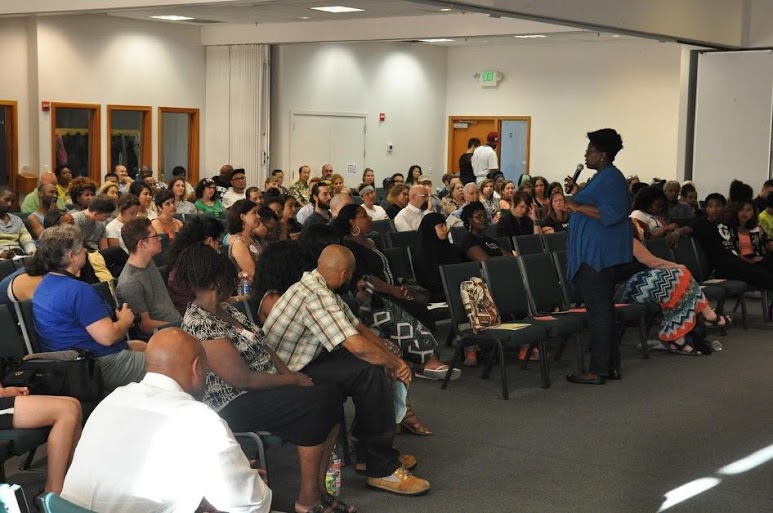 Jackie De La Cruz is mother of two African American sons and also a student at Seattle University.  She attended the Restorative Justice Town Hall at Urban Impact two Wednesday’s ago, because she feels our young people should be loved and uplifted more.  Immediately following the event, she described it as “a beautiful, powerful night of community, grassroots activism.”

As Co-Emcee’s, Senait Brown and Saroeum Phoung established a thoughtful but serious tone from the start.  Senait is the Political Action Chair for the Seattle-King County branch of the NAACP, Political Director for BlackOutWA, and Co-chair of Ending the Prison Industrial Complex (EPIC).  Saroeum Phoung uses peacemaking circles to empower and transform individuals, institutions, and communities.  He has personal experience with such transformation.  Saroeum was born in Cambodia and fled the country during the Pol Pot regime.  His family immigrated to the United States via refugee camps in Thailand and the Philippines.  Settling in East Boston, he faced all too common difficulties of immigrant life – cultural differences, racism, and violence.  Senait started the night off by guiding the crowd through a Libation ceremony.  Many in the crowd contributed to this part of the ceremony by calling out the names of loved ones, ancestors and freedom fighters who struggled for justice before us.

The Restorative Justice Town Hall was a collaboration between Ending the Prison Industrial Complex and the Rainier Beach Action Coalition.  It was also the debut event for Rainier Beach Restorative Justice Project(RBRJP).  The latter grew out of conversations earlier this year, between a handful of black people talking about our community work and what it will really take to change conditions that contribute to the suffering of so many families.  Gregory Davis, Zac Davis, Dustin Washington, Afam Ayika, Angela Davis and myself were all part of those early conversations.  One of the things we discussed was the need to fill in the details around what should be done instead of building a Youth Jail, as is being proposed by King County.  What exactly should be the community led prevention and alternative to detention programs the whole city has been talking about recently?  Some talked about wanting to be part of bringing those solutions into existence.  We learned that Restorative Justice had been identified as a subject the Rainier Beach community wanted to learn more about at recent town halls and youth violence forums.  Some shared about a rich history of community organizing in Rainier Beach around finding alternatives to the systems that are failing us.

Eventually a decision was made to work together and learn more about Restorative Justice, bring together stakeholders, and find ways it may be implemented in Rainier Beach that would most benefit everyday type of people.  Research was done.  Individuals with some local expertise were identified.  The decision was made to hold a town hall meeting specifically focused on Restorative Justice and how it might be used to create alternatives that benefit the Rainier Beach community.  The coalition and a new logo were both revealed to the public at this Town hall meeting.

Jerrell Davis and Darozyl Touch shared about experiences being Servant Leaders for Urban Impacts Children Defense Fund Freedom Schools. One of the evening’s many highlights was feeling the energy in the room as we chanted “Uhuru” at the end, collectively reciting an Assata Shakur quote Jerrell and Darozyl led us through.  Then, Angola Dixon broke down Restorative Justice.  She explained that it is an “umbrella term.”  Under that umbrella fall many practices that utilize restorative principles such as Peacemaking, Mediation, Peer to Peer counseling, the Dominic Barter Model, and Family Conferencing.  Some people talk about these practices as if that’s all there is to Restorative Justice.  The truth is that individuals and situations differ, so to do the solutions that fit them.  The new holistic system that replaces the broken punitive one cannot be conceived as a one size fits all type model.  Functional Restorative Justice must offer a variety of remedies.  Of course, all cannot be covered in a 2 hour meeting.  For this town hall, Angela made it clear our focus would be on the restorative practice of Peacemaking Circles and what they can do for the Rainier Beach community.

Afam Ayika shared Peacemaking principles and painted a picture of what the process entails.  He also talked about his first experience going through a peacemaking circle, sharing his hopes and dreams for what the process could do for communities he’s been part of.  He  then spoke a bit about the South End/Central District beef.  He shared with the room that he was born in a tiny village in Nigeria called Aguluezechwkwu and described a dream of bringing together the Housa and the Igbo, two tribes from northern and south eastern Nigeria that have been in conflict longer than most can remember. “I never thought peace in either place would be possible…  Until I experienced my first peacemaking circle…  I feel the potential for this practice is damn near limitless.”

The concept of alternatives to detention programs that attempt to heal young people is not new or completely alien to King County.  My personal opinion is that models such as “Creative Justice” and “Diversion 180 program” need to be built up and out.  We need to expand eligibility criteria so more young people are eligible.  Also, many youth need programs like that to last longer.  A logical next step might be the strengthening of post diversion follow up, mentoring, and access to services.

Dominique Davis contributed his experiences as co-founder and director of the Diversion 180 program.  He talked about the 2000 young people who had charges dropped after attending a one day workshop put on by his program and facilitated by adults who shared the youth’s backgrounds and struggles.  He also spoke on his recent work reaching out to some of the young people involved in the violence that has claimed so many young lives in the Seattle area this summer. He then bared his soul, and shared about his own trials, tribulations, and wrong decisions he made during his adolescence, including his time served in prison.  He concluded by  letting the young people in attendance know that there are people in the community who cares about them.

Senait then reminded us all that everything we need for our liberation was in that room.  If we all stay together and work in accountable and principled ways, there is truly no limit to how much we will accomplish. Also, if we are not consciously working to address and undo racism, the disparities just continue in whatever new model is created. And, if the communities most impacted are not centered, Restorative Justice will not be sustainable.  Past practice proves this.

It was then time for break out sessions. Facilitators from Tyree Scott Freedom School and Children’s Defense Fund Freedom schools worked together to lead them. The breakouts focused on using restorative principles to create community led alternatives in education, criminal justice, and community conflict situations.

Concluding the night, Gregory Davis thanked the crowd for coming out.  He reminded the room the seriousness of the moment and the weight of history upon our shoulders. At one point he called out the names of Trayvon Martin, Sandra Bland, and Freddie Gray.  All who came or wanted to come to the Town Hall at Urban Impact were invited to next month’s Rainier Beach Restorative Justice Planning Meeting.  It will take place September 15th.  The meeting will start at 6pm.  A light meal will be provided. Call Afam Ayika at (360)599-4500 for location and other details.  Educators, young people, and families directly impacted by these broken systems are especially encouraged to attend.

Amelia Vassar volunteered at the registration table and brought our three month old son.  She left feeling hopeful, “What I noticed most were all of the positive responses.  Most everyone seemed really excited about the idea and ways it might be implemented to really help communities like Rainier Beach.  We all know the current system isn’t working.  It isn’t working for the victims or the perpetrators.  The consequences would be more meaningful if they have say in what happens for both sides.  No one even expects the current way to work anymore…  The new way seems more realistic.”