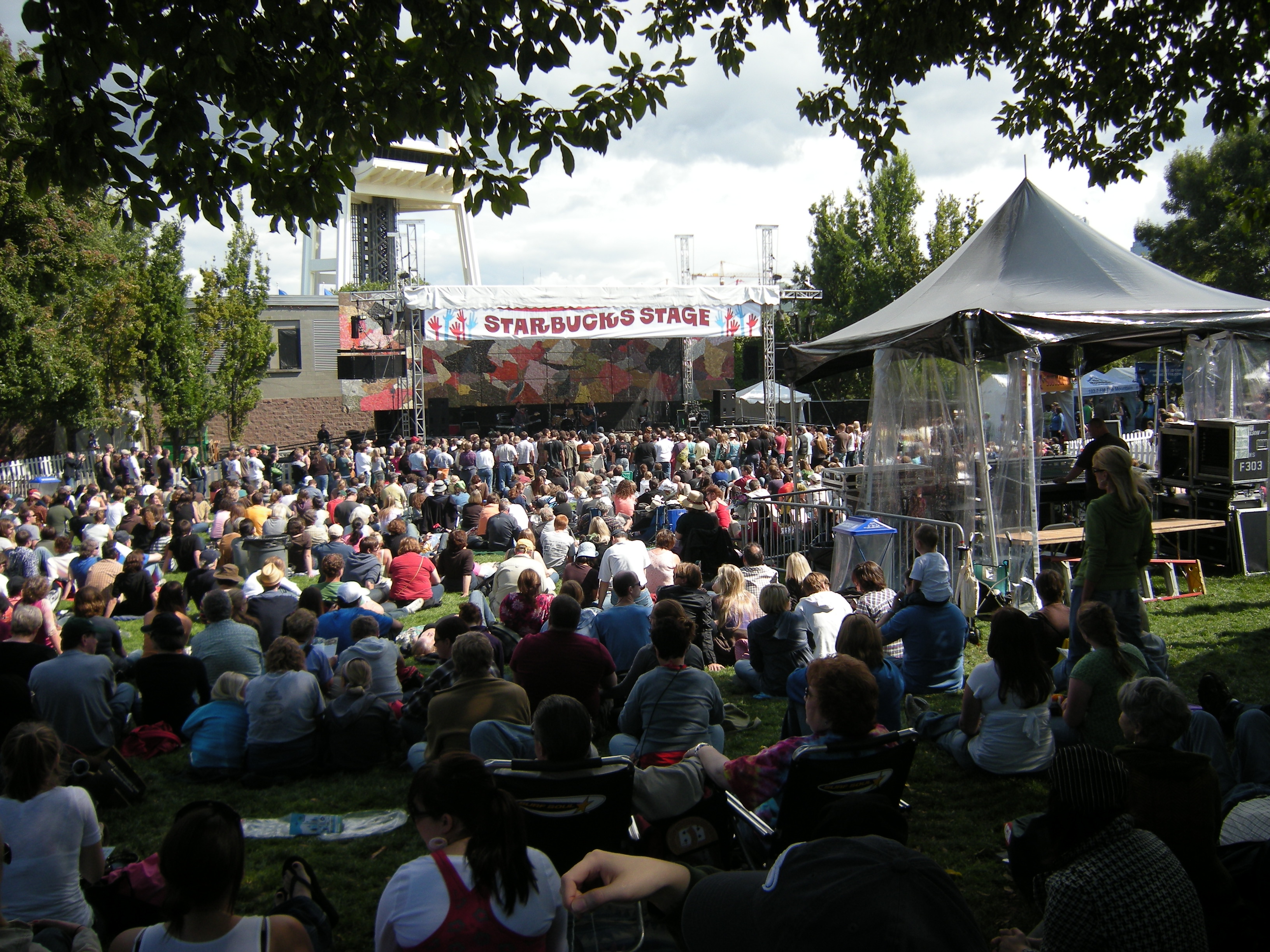 It’s Labor Day Weekend once again, and thousands of Seattleites and non-Seattleites alike are trucking from their respective residences to take part in Seattle’s very own Bumbershoot. Homespun stages are set up around Key Arena, where the biggest names perform.  The Seattle Center area comes alive with vendors selling – as my mother calls it – hippie bullshit. Fried PB&J sandwiches and questionable Thai food remnants scatter the paths. It’s one part music festival, one part fair, and one part culture fest, a medley of events that only Seattle typically shoves together.

This eclectic environment is one that is quite popular for many Seattleites. It’s convenient, costs less than leaving town, you can go for one day or all of them, and the set-up feels less contained than a traditional music festival. In fact, for many years I was among the folks who chose a day based on the headliner, paid my $90, and jaunted through the entrance to spend more dough on corn-on-the-cob and a scarf with Sanskrit print.

This year, a bit older and wiser, I am staying home.

There are plenty of reasons why I decided not to spend my weekend here, but to save all of you some time, I’ve narrowed it down to 7. I’ll go in order from least to most important. You know, for theatricality’s sake.

#7. The Food: Okay, the food isn’t terrible, it’s true. But it’s also the same food featured at every single Seattle Street Fair ever in the history of forever, and unlike these fairs, Bumbershoot costs money. And as it’s an all-day shindig, you’ll probably be forced to buy that $16 kebab plate whether you like it or not. Far better to spend that money on a drink and a meal nearer home.

#6. The Vendors: Again, like the food, it’s not that the vendors themselves are all that bad. It’s more the atmosphere they create. While vendors are great for street fairs and Folklife, at a music festival where you’ve already paid a hefty fee and are trying to get your music fix, a slew of craftsmen urging you to spend even more money leaves a bad taste in my mouth. It’s one of the downsides to a combo pack of music festival and culture fest. The result is crowding, an onslaught of cheap goods, and even more of your money down the drain.

#5. The Bands: The bands. Oh, the bands. To be fair, there’s always two to five artists that I enjoy each year I go. Last year was Walk the Moon and Big Freedia. But largely, the major bands are mediocre electronica artists, old “rock legends” who struggle bus their ways through hits they can no longer, well, hit, and… Katy Perry. Seriously, that girl loves Bumbershoot. (She’s taking a break this year I guess, but she’ll be back.) And the occasional hit is usually not a group that you would pay $100 to see, or even close to that amount. My advice? If you need to see Chance the Rapper (I know I do), look him up and see him at a different venue. Spend the rest of that $100 on a nice dinner and drinks beforehand.

#4. The Crowd: Tourists, homeless people, and those weird children’s marimba groups are the only people who frequent the Center House and its surrounding territory. The influx of high schoolers from Bellevue arriving to see Ellie Goulding don’t exactly make the scene more poppin’.

#3. The Stages: Of course, Key Arena has great acoustics. But most of the bands you’d want to see aren’t going to be in Key Arena (With the exception of the Weeknd… Love that guy). The truly awesome acts will inevitably play the makeshift stages on the lawn amidst the vendors. The acoustics are mediocre at best and you can’t see a thing. My advice? Check to see if they’re playing at any local venues in the next week, like Neumos. Chances are, they didn’t truck their asses out to Seattle for Bumbershoot alone. Catch them somewhere cheaper and better.

#2. The Cost: Here’s the thing, folks. I’m all for free shit. So last year, when I was invited to go for free, for SURE I grabbed my swanky press badge (Okay, it was a “Hello My Name Is..” sticker but still) and hopped on the 8 down to Seattle Center. Despite all of the above complaints, there are worse ways to spend a Sunday afternoon. But for the price? $85-$110/day? To put it into perspective, that’s 10 full-price cocktails at The Royal Room, and you can see as much free music there as you like to boot.

#1. The Area: Let’s be real. Seattle Center is perhaps the best reason to stay in South Seattle this Labor Day Weekend. It’s a long bus ride, there isn’t any good food to be had (but plenty of expensive choices) and there’s no parking for miles that’s under $40/day. The Food Court is pretty much the only bathroom access available, and you have to brave the aforementioned Marimba Chorus of the Northwest to get there. In short, it’s a lot of hassle for an area that is perhaps my least favorite in Seattle (other than Belltown… but that’s for another day). On the other hand, I’m already sitting in my favorite area in the city. So to me, this makes my choice a no-brainer.

Go to Art Walk Rainier Beach (South Seattle’s own Music and Arts festival) where you can see Bumbershoot level acts – Massive Monkees, EriAm Sisters, Love City Love, etc. – for  (wait for it…) FREE!! Take a walk around Columbia City. Hop on the bus to the CD and check out the new Fat’s Chicken and Waffles restaurant. Go to Chinook Beach Park with a music player and pretend you’re at your very own private fest. Make your own Labor Day on the South End. You’ll get more bang for your buck, and probably more bang, period.