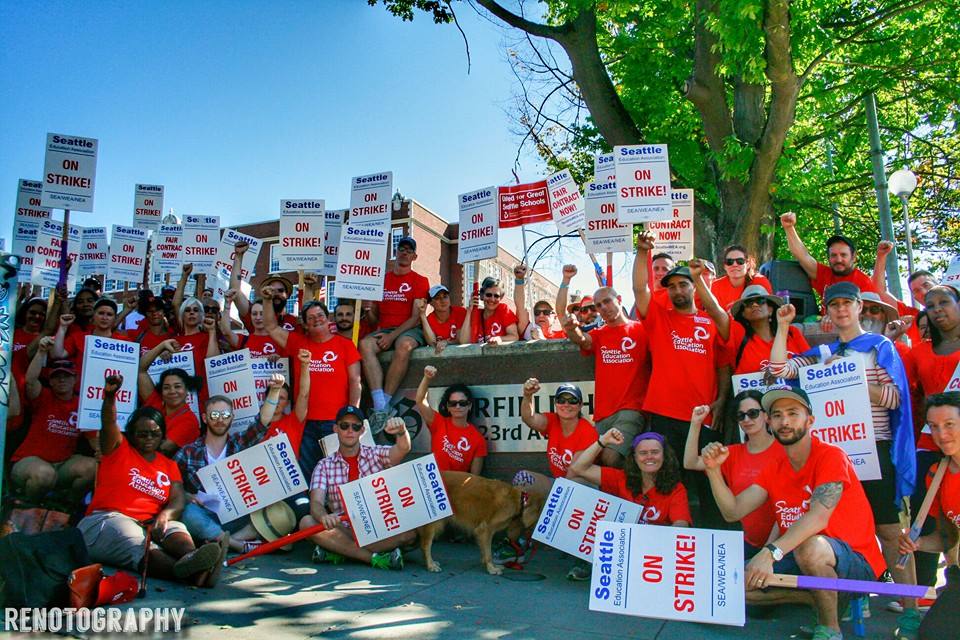 If you know one thing about the teacher strike, it’s probably that the teachers are bargaining for higher wages, which is true.

Seattle Public Schools teachers haven’t had a cost of living adjustment in six years — and in that time, rents in Seattle have gone up about 40% in some places, meaning our educators are actively making less money than they were a few years ago, to do the same important job.

So yes, they are asking for a raise. But they’re also asking for a lot more, and on behalf of a lot of other people. And it’s those additional demands that could have a huge impact on the cycle of poverty in some of Seattle’s lowest-income schools.

Because it’s not just the teachers who are on strike; office professionals, nurses, substitutes, speech and language pathologists, special educators, and counselors are also represented by the Seattle Education Association — and these specialists are often on the front lines of poverty.

They’re the trusted adults that kids turn to when their homes are chaotic. They’re the professionals who can identify and address behavioral problems, learning disorders, or other issues, which may disrupt the education of a low-income student. They are the surrogate parent, the triage nurse, the support system, and the encouragement — myriad scholars agree that their roles are essential for helping low-income students succeed.

And for a very, very long time, they have operated under ruthlessly difficult working conditions, which make doing their jobs very hard.

“Without the state stepping up to their constitutional obligation, all of these groups are in difficult situations,” says Jonathan Knapp, President of the Seattle Education Association.

Some of the groups, like language and speech pathologists, have literally no contractual caseload limits, meaning they can easily have a caseload in the thousands. Counselors do have a limit — but it’s still astronomical.

“They have a caseload of 400 to one,” Knapp says. “Which is a lot. It’s way more than their professional organization recommends.”

That’s a fact that’s especially concerning to Garfield high school teacher and activist Jesse Hagopian, who works closely with low-income students, and knows how important counseling is for them.

But without help navigating applications, financial aid, and the academic demands of higher ed — not to mention keeping their grades up while still in high school and living in unstable situations — students who come from poor families don’t stand much of a chance.

Hagopian, who’s the advisor for the Black Student Union, says that he’s had numerous BSU members — and even presidents — who have gone on to college, only to be forced to drop out due to their finances. They’re not alone; students of color cite financial hardship as the biggest reason they drop out of school (almost 70% say that’s the reason), compared to fewer than 50% of white students.

Going to college is important for getting out of poverty — but graduating and being able to survive life after school (read: heaped student loan debt) is even more important. High school counselors are an essential link to that. For students whose parents didn’t go to college themselves — called first-generation students — having an adult in their life who can help them not only get into school, but prepare for its reality, is paramount.

In the United States, first-generation college students face higher-than-average dropout rates; only 24% of college students whose parents did not go to college will graduate within four years.

Right out of the gate, they face more hardship than their peers, in large part because they twice as likely to be financially independent and have grants, while also balancing the academic performance requirements of grants like the Pell grant. Those numbers are even more pressing for students of color, who already face a harder job market and higher unemployment, making it harder to balance work, school and the budget.

And at a time when more and more students are having college paid for by their parents (it’s the single-biggest source of college funding, according to a 2015 report from Sallie Mae), first-generation and low-income students are at a distinct disadvantage after school, as well, when their earnings are shredded by college debt.

Students of color are more likely to experience the squeeze of student loans after school, with many of them turning to predatory for-profit colleges, instead of traditional universities.

All of which means that 17-year-olds need all of the counseling they can get, from adults who know what they’re doing and have the bandwidth to do it.

Darryl James, a middle school counselor at Aki Kurose who sits on the bargaining team, says that the problem begins long before high school, and that early intervention is key. For many students, behavioral problems begin in elementary school — where, thanks to budget cuts and a move toward more discretionary spending several years ago, low-income schools simply do not have — and that can mean loss of classroom time, which all but sets up poor kids not to go onto college.

And for low-income students, that’s a stumble from which they can’t and won’t recover — unless they have a trusted adult in a support role who has the time and energy to help them with it. Which is part of what the SEA is striking for right this minute.

“The caseloads have always been unbearable,” says James “and it’s worse in the high-poverty schools.”

But, says James, the school board seems unwilling to admit that requiring schools to hire support staff and cutting caseloads is anything other than optional. Rather than viewing a strong support staff as an essential step toward helping curb poverty (and all of the social issues that come along with it) at an early stage, the school board views them as extras — bonuses for schools that can afford them, and unnecessary for those that can’t.

“The way that it is now, we’re always waiting for something to happen,” James explains. “Instead, we need to be intervening. It’s only going to get worse if we don’t change that mindset.”

2 thoughts on “The Teacher Strike and the Cycle of Poverty”