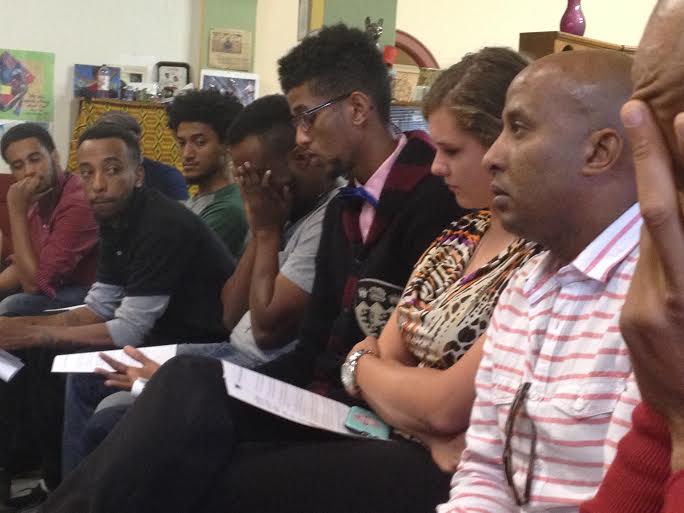 Seattle Hookah Lounge owners met with three representatives from the Office of Civil Rights to complete a racial equity assessment Tuesday afternoon. “At the end of this toolkit process what we’re going to have some idea about is what are the racial equity impacts on a whole assortment of hookah lounge issues,” said Patricia Lally, the Director of the Office of Civil Rights. “The regulatory, how can hookah lounges be licensed, should they be licensed, if they are going to be allowed to exist who benefits and who might be harmed and if there is a harm how do we help mitigate that harm.”

“The work that we are doing around these hookah lounges is grounded in these principals of what we call anti-racist organizing,” explained Perry. “And it’s important that we at least acknowledge in these moments that these principals are not just theoretical for us, they are lived and how we move through the world, how we relate to each other and how we even sit in this space today and why we even sit in this space.”

Since Mayor Murray announced his plan to close all Seattle hookah lounges in a press conference last month, there has been a wide spectrum of responses divided along ethnic and generational lines. Some activists from the International District community have presented the viewpoint that hookah lounges create health and safety hazards by encouraging tobacco use and attracting criminal activity by staying open late hours. At a contentious city council meeting last month, hookah lounge owners and supporters pushed back against the closure, framing the issue as a racially motivated, arbitrary enforcement of the law.

In 2005 the state of Washington passed Initiative 901 banning smoking in public spaces including bars, vehicles open to the public, and places of employment.

“Our lounges are not public places. They are private clubs,” explained Nebil Mohammed, co-owner of the Medina Hookah Lounge. He spoke of a growing stigma the controversy has placed on the lounges and their owners, defending Amar Alalimi, the owner of King’s Hookah Lounge against allegations of non-payment of taxes. “The city attorney said there is no basis for the charges. He just did not file $0.00 that he didn’t owe, but a lot of people already assume that he was charged and that he’s a criminal and his business is not going to survive.”

Comments ran a spectrum from defending the legalities of the business to discussing the impacts closing the lounges would have not only on the community, but on individual lives. “I feel like I’m losing what I worked so hard for,” said Mohammed. “I have a mortgage that I have to pay. I have a lease that I’ve committed to and a lot of members, because of the negative media, they already think that we’ve been shut down. 40% of my members already think it’s closed. So you can imagine that business is down by 65%-70%.”

While well intentioned, the questions posed in the assessment did not yield any new information. Notes from the discussion were recorded for public record and a report will be compiled and read by the Mayor and other pertinent city officials. Whether any further action will be taken remains to be seen.

“Even though this really isn’t the work of my department, we’re not regulatory, we don’t create regulations for businesses at the office for civil rights, but when the mayor said you do this toolkit, we’re taking on the role as if we… as if this policy was ours to consider,” said Lally.

Without the authority to actually write regulations or make any policy decisions, it seems doubtful that the racial equity assessment was anything more than a perfunctory check box to make the city seem less racist.

“We know, history tells us very clearly, we’re not different from any city in America, that white people typically benefit from city actions, from laws, so our job at the office for civil rights is to be a guardian for racial equity, is to say well hold on here, hold on here, we’re creating legislation or regulatory policy that might benefit some, but it might not benefit others and let’s see who those others are,” said Lally.

While having a process to identify the role of race in policy is important, more valuable still would be a process with the power to affect change. Romeo Kaiser, a VIP hookah lounge member, expressed frustration with the mayor. “He was coming to our mosques and to our homes and to our community centers and asking us to vote for him and today he turned his back on us.”