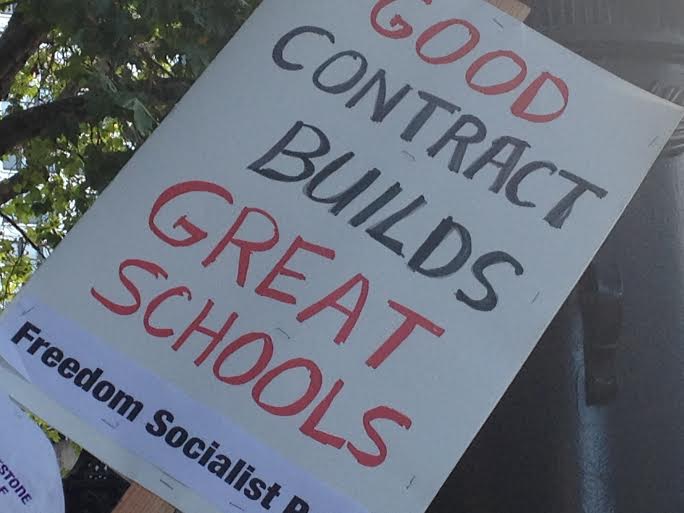 After five missed school days Seattle Public Schools and the Seattle Education Association have come to a tentative agreement that may end the teacher’s strike. Though full details haven’t been released as of yet, The Seattle Education Association’s board of directors and its representative body voted to recommend the agreement reached this morning by deal makers for the the union and district.

The District was so pleased with the resumption of classes on Thursday they sent out an announcement on Twitter moments after the deal was struck. However announcement of the agreement did not deter the almost 1,000 parents, students, and community members who marched from 1st and Yesler in Pioneer Square to the John Stanford Center for Educational Excellence this morning.

“I’m here today because I used to work for the school district and the union and I really feel like it’s important that people at John Stanford Center hear what’s important to the city,” said Dayna Cody Kramers, a 45 year old tutor at John Muir Elementary. “It feels like a lot of time they get down there in that building kind of separate from the world and they don’t know what teachers need, they don’t know what parent’s wants.  And I feel like it’s important to have things like this where it’s big and loud and they might listen.”

The City Council was clearly listening to its constituents yesterday when they voted unanimously to pass a resolution enacting Seattle Educator’s Week and encouraging the District to bargain in good faith. As the march headed down 1st ave, homemade picket signs floated above a sea of red shirts, many sporting the face of city councilwoman Kshama Sawant who proposed the resolution.

“I’m just out here supporting teachers, children and the union. I’m a strong follower of Kshama Sawant,” said Patty Bicknell whose son graduated from Seattle Public Schools three years ago and is now at the University of Washington. “I want these kids to have recess and I want these teachers to be supported.”

Sydney Stumpf and Aderyn Kee two 9 year olds from Loyal Heights elementary were present to show support for their teachers. “Our teachers are on strike and we wanted to go too,” said Stumpf.

While clearly delighting in the entertainment of the protest, both girls expressed their readiness to get back to school , as did Morgan Gwilym Tso a Sophomore at Garfield High School. Gwilym Tso marched with four other representatives of the Associated Student Body (Garfield Student government).

Garfield traditionally host the city’s largest MLK day rally, so Gwilym Tso explained this was not his first protest rally, but this was the first time he’d had the opportunity to support teachers in this way.

“A lot of my peers and other students though they are not directly showing support by coming out to marches like this still feel the same way as I do,” he said.

As the march arrived at its rallying point, families were encourages to participate in a “play” in. It felt like a parade with balloons and sidewalk chalk in addition to drum beating and chanting. There was no PA system or even bullhorns, but that did not stop the community from being heard.  Even the police accompanying the march seemed taken with the spirit of the action and showed a comradery noticeably absent from other recent actions.  The message was clear the community is united in its support not only for increasing teacher salaries, but for preserving recess, and making sure teachers still have adequate time to prep for their classes.

“The teachers really deserve the pay raises that they’re asking for, but all of the other things they’re asking for really impressed me as a former union member,” said Cody Kramers. “They were really standing up for kids in a way that they always do in their classrooms, but aren’t always able to translate it to policy.”