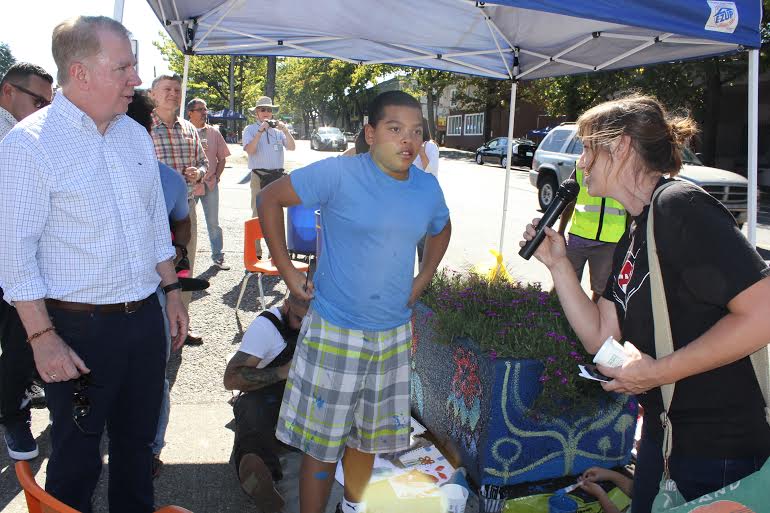 On Saturday, more than forty Hillman city residents joined Seattle City Mayor Ed Murray along with representatives from the Department of Neighborhoods, the local fire station and the Seattle Police Department’s South Precinct for a jaunt around the South End neighborhood’s ten blocks to catch the ear of the mayor while making city officials aware of needed area improvements.

This was the eleventh of the mayor’s ongoing “Find It, Fix It” walks in Seattle that began last year as a way to directly address concerns specific to local neighborhoods with citizens. It was the first to take place in South Seattle this year and did so after a summer that saw increased gun violence in the area.

“I think it’s important he sees firsthand some of the issues that need to be addressed that wouldn’t necessarily be addressed if they’re not seen firsthand by city leaders.” said Deborah Caul, who has lived in Hillman City the past six years.

Caul joined many on the walk whose concerns to the mayor focused on public safety and transportation in the area.

The latter resonated with the mayor, who was running a half hour late for the walk due to traffic coming from the Central District Block Party, as he rushed to its starting point at Rainier Avenue Church. “I almost got hit by a car crossing the street (on Rainier Avenue). We’ve got some significant pedestrian issues we need to work on,” Mayor Murray told the Emerald during the walk.

South Precinct Captain Chris Washburn, who was also on the walk, did the duty of addressing some of the Public Safety concerns

“Vigilant neighbors who are well connected and working towards a common cause are the biggest deterrents to crime,” Washburn said.

He iterated to walkers on the round-trip route from Rainier and Juneau to Rainier and Brandon that community members everywhere in the South End should make sure to report anytime gunshots are fired, as the shell casings can be used to match those of any crime conducted in the region, potentially catching the offender.

Utilized as a platform to deliver city department information directly to city residents, the walks have not been without their share of criticism. Some South End residents have claimed they have more to do with photo opportunities than soliciting advice for sound policy.

Those critics might be heartened to hear that representatives from Seattle University’s Department of Criminal Justice were on hand as part of a longitudinal study of the walks’ effectiveness.

Still, many among the dozens came to feel a sense of social attachment to their neighborhood.

“Hillman is full of a lot of passionate, amazing folks. I’m walking because I wanted to meet more of them and learn more about what they needed, learn what their fears and concerns were so we can get them attention and support and be a part of the community, instead of just coming in here and telling folks what we want,” said Jose Diaz who moved to the neighborhood with his wife last April.

Besides possibly expressing what all rooted South Enders would love to hear from transplants, Diaz said he loved the beauty of the area.

That beauty was on full display Saturday as the walk coincided with a Hillman City Clean Up and South End children decoratively painting “planter boxes” that stretched for four blocks along Rainier Avenue. The colorful boxes housed a jamboree of carnations, dahlias and curcumas amongst other flowers.

The planter boxes were part of a project headed up by local chefs Tarik Abdullah and Ariel Bangs. All of the decorations for the boxes were designed by local South End kids, something Abdullah took pride in as adults lent a hand in painting.

“I mean, straight up, growing up in the South End and seeing what has happened… this is a beautiful thing today. The fact of the matter is it’s a communal effort of different ages, different races and different genders, coming here and beautifying our community organically,” Abdullah enthused.

Seattle’s mayor reiterated the thought while stressing that concerns remained.

“Hillman is a community that has really been revitalized. But, the neighborhood has some problems, like other neighborhoods. The city needs to step up, and we will. That’s what today’s walks was about” said Murray.