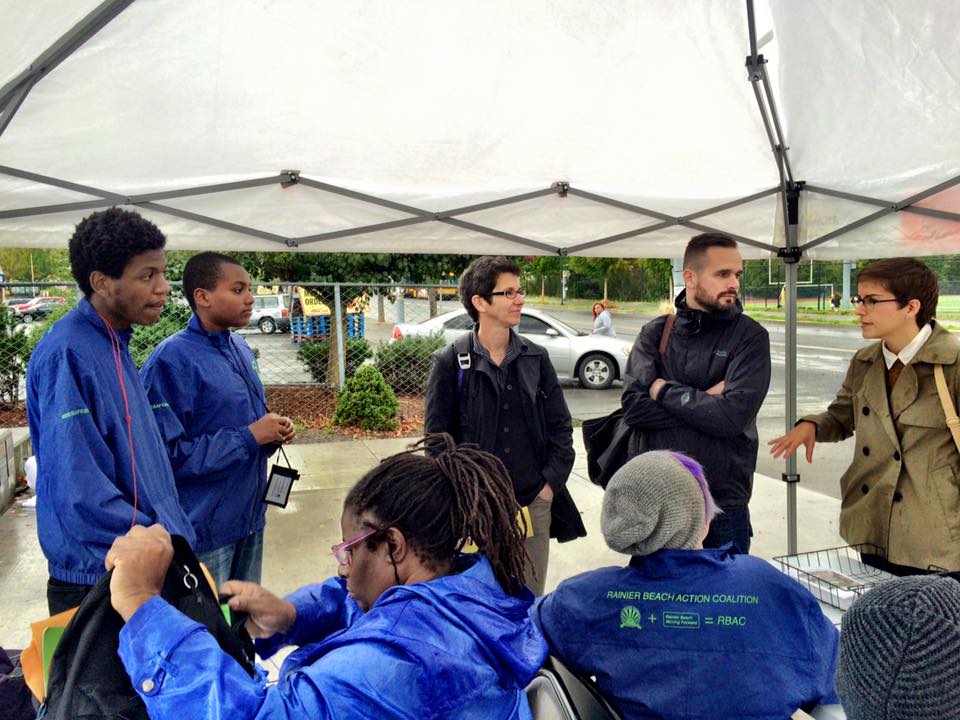 Based on the results and findings we were able to identify the 5 street corners in the area that are most prevalent for youth crime. Combining the data and community ideas gathered at United Story’s 2014 The Gathering event and Breaking the Pane workshops, strategies to reduce youth crime were conceived. A number of activities are functions of Rainier Beach: A Beautiful Safe Place for Youth (RB ABSPY) like the Rainier Beach Back 2 School Bash, RB Town Hall Meetings, Safe Passage operated by King County Boys and Girls Club and the pioneering Greeter Corners.

The Greeter Corner project enlists high school students, mostly from Rainier Beach High School, as Youth Engagement Workers (YEWs) and community leaders as Outreach Workers (OWs) who work as a team to bring community engagement activities and events to the 5 aforementioned street corners we call “hotspots.” The point is to holistically transform the energy and reputations of these spaces through education of the root causes, positive engagement, and combating the biased perspective of our neighborhood that the news media pronounces.

Referred to as “non-arrest interventions”, the Greeter Corner and SNG’s Business Engagement and Outreach teams set out to develop stewardship and guardianship of these spaces. The truth is that while crime does happen in these places, it is not omnipresent. Actually, quite the opposite- the majority of the time these corners are populated by locals commuting to and from work, youth between the ages of 5-24, the neighborhood business folk and their customers. All these factions are stakeholders in the Rainier Beach community.

I’m an Outreach Worker with RBAC and also played a role in Breaking the Pane, so being able to see the community’s input made into a reality is especially inspiring for me. The Greeter Corner project epitomizes grassroots organization because it is the translation of an idea to engage youth and reduce crime made into a full fledged community project.  Despite this truth, some are suspicious of the intention.

While at the Greeter Corner, especially while we are picking up litter, often people walk up asking (almost accusingly) “what are you doing out here?”

At first, I wondered how our neighbors could be so critical of such positive action, simply because they’ve never seen something like this before. As I thought about it, I gained some clarity and it soon became understood: people are critical and inquisitive because it is new, innovative, and unprecedented. I’ve heard people literally scoff at the thought of youth led projects that aim to beautify a neighborhood and reduce crime. I’ve also heard many say they would support such ventures, yet have never followed through. The Greeter Corners provide a very real opportunity for the young people in Rainier Beach.

The fact that these high school students are able play a leading role, in addition to acquiring skills that many adults lack, is a further blessing. All students involved are hired as independent contractors and must learn to complete an invoice, make decisions based on contractual agreements, and inevitably gain experience in entrepreneurship. If you were to ask Tina Brigit, a junior at Rainier Beach HS and a Youth Engagement Worker, about the kinds of skills one may procure while participating in this project she’d say “The many skills I’ve learned range from putting together a canopy, filling out invoices, connecting with businesses, and editing videos, but there really is so much more. I’ve also learned and developed the skill of being a leader, and that hasn’t been something I was accustomed to doing, but I always wanted to have as a skill. However, throughout this project I have stepped up to do things I didn’t really imagine myself  doing, some things I wasn’t even capable of doing just three months ago, and I believe that’s because of the close atmosphere when we’re all together.”

The youth of the Rainier Valley have historically been underestimated and stigmatized. So, seeing these young people strive to maximize the potential they recognize is within them is a huge step forward in progress. These students are catalysts for change and their ability to do this as a cohesive team speaks to their resilience.

Within the last couple years I’ve been to a number of gatherings and conferences that focus on Black Male Achievement, youth violence reduction, and Restorative Justice. At these events I often hear “we gotta change the narrative!” I was convinced of this at first, but after firm analysis and through my work with RBAC, now I have a much different perspective. I don’t think the narrative needs to be changed. If you ask me the true narrative of our predominantly Black and Brown communities, such as Rainier Beach, is consistent…and widely positive. However, as there are sides to every story, there is a certain perspective from which “the narrative” is being communicated. We don’t need to change the narrative- WE NEED TO TELL THE NARRATIVE. The fact is we as Black and Brown communities- the most disenfranchised factions of society in this country- have been allowing the uninformed newscasters, the wealthy pundits, and the invasive journalists to tell OUR stories. That’s the problem!

Less than a retelling, we need a reclamation-a repossession of our own stories and a platform to share them.

South End residents are very aware of media outlets’ portrayal of our community, even during this time of displacement via gentrification. The Greeter Corner project also collaborates with FreedomNet, which provides training and opportunity for the youth to be citizen journalists, using social media along with entrusted sources to report on positive community building actions, including their own, through the Rainier Beach News Wire. This is a practice of one of the most powerful ways cultures throughout the ages have maintained the legacy of their communities in the face of suppression, by storytelling. Strengthening resident connections is an integral aspect of practicing COMMUNITY.

Now, I can offer you the same challenge I encountered and is the amalgamation of Rainier Beach: a Beautiful Safe Place for Youth: the idea that “community” is not a noun, COMMUNITY IS A VERB.

To support this movement of “Community as a Verb” email us at rbactioncoalition@gmail.com, come join the story!

Special thanks to Atlantic Street Center and Urban Impact for hosting our team and leadership planning meetings.

Rainier Beach: A Beautiful Safe Place for Youth is funded by the City of Seattle and the Byrne Grant.