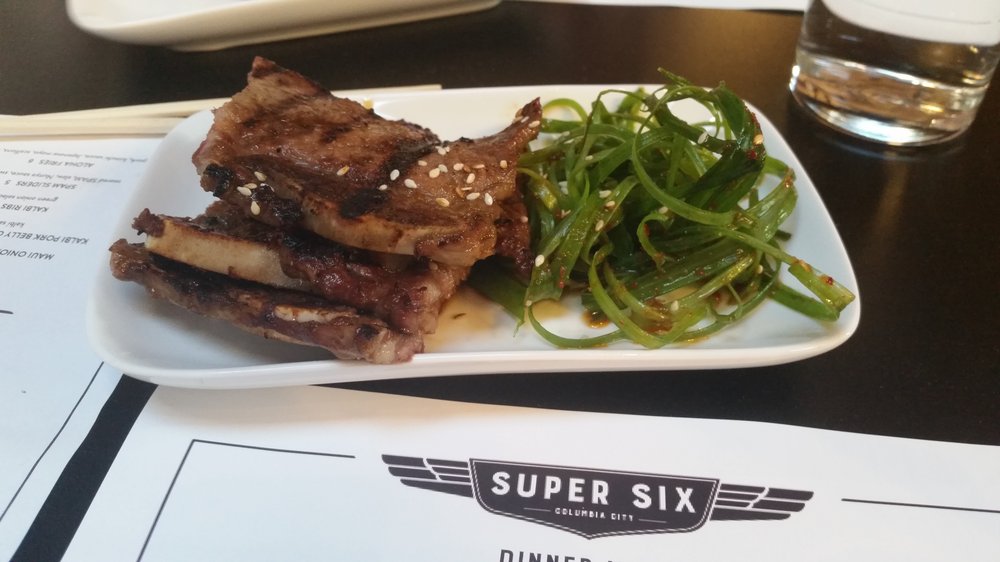 Earlier this summer I walked down Hudson street in Columbia City and noticed a couple guys up on a ladder, painting a brick building I’d never really noticed before.  The logo was black and I could just make out the first two large S’s at the far left side.  A few days later, I was so happy to learn this would be the site for Super Six, the newest restaurant from the owners of Marination Ma Kai (Alkai) and Marination Station (Capitol Hill).

If you’re familiar with either of these establishments, Marination Catering or “Big Blue” – their original food truck – then I know you’re already pumped to see this uniquely delectable Hawaiian-Korean fusion locally-owned restaurant chain set up shop in our neighborhood.  If you’ve never tried any of these Seattle establishments, Super Six is a great place to start.

My family and I ended a long Wednesday of work, school, the farmer’s market and an orthodontist appointment with dinner at Super Six.  I’d noticed the restaurant packed out during its opening weekend but didn’t expect it to be too busy on a Wednesday at 6pm.

We arrived and I immediately got nervous; the place was almost entirely full!  All I could see were a couple spots at the bar and one two-person table open.  Between the full capacity, the grown-up cool interior and the attentive hostess at the front I felt foolish for showing up with 2 kids, 2 parents and no reservation.  I feared Super Six was a place for fancy adults with long-term plans not a world-weary family of four hoping for early bedtimes.

But the hostess smiled kindly – even when my daughter balked at the idea of sitting outside – and proceeded to ask another party to share their 8-person table with us.  I was very impressed with this down-home, informal approach from the hostess.  We were clearly welcome here – sticky fingers, orthodontia and all.

This comfortable, yet slightly hip vibe permeates Super Six.  In an apparent homage to the building’s original use as an auto-body shop, there is a feeling of the industrial with bare cement floors, gray and blue tones and lots of chrome.  Above the bar is an artistic rendering of a screw and bolt such as you’d expect to see in a 1950s automobile owner’s manual.  The overall effect was somehow classy and trendy while still accessible.

But most of the accessibility came from the warm and attentive staff.  Our waitress took special requests with ease, walked me through the gluten-free menu item by item and was incredibly kind to my kids.  Restaurants lose me quickly if they’re too fancy to be nice to children.  Super Six welcomed my messy munchkins with moist towelettes and an encouragement to play with the caramel sauce.

The prices are not low.  However, any initial grumpiness at the $21 for my Pork Ssam immediately melted away at first bite.  I have no idea what makes this dish so incredible – the perfect marinade? the fun presentation? The insanely good gingery, pickly relish?  Whatever it is, I’m hooked.  And gluten-free to boot.  With all that, the price didn’t bother me at all.  Plus, my husband and I shared it and still took leftovers home so the portions are not skimpy.

We also enjoyed the chicken wings (kid favorite!), grilled salmon steak and garlic fried rice.  All were delectable but the fried rice was a particular joy for me.  I could not stop eating it; probably could have managed a second order and maybe still wanted more.

Instead, we got dessert.  We were trying to take it easy but when the owner, Kamala, noticed my kids and husband sharing one Malasada between them she brought us three more – on the house – saying everyone deserves their own.  The Malasada is a Portuguese donut, made in-house by some kind of magic pastry chef.  We chose to have ours filled with nutella and were delighted to see them delivered with a squeeze bottle of caramel for do-it-yourself garnish.

I had not planned to try the doughnut – I’m gluten-free after all, and rarely find anything worth the risk of a reaction.  But those Malasadas are, in a word, irresistible.  I had just one bite.  But one bite was enough to know I was tasting something magical.  We almost never order dessert when we eat out.  Clearly, Malasadas are going to be the exception to that rule in our family; everyone was smitten.

As if they hadn’t already won me over, one final act of kindness cemented my love for Super Six.  As so often happens, we forgot our leftovers on the table when we left.  I hesitated when I realized we’d done so, 5 minutes into our drive home.  I hated to see that amazing food go to waste but how likely was it that I could get back there before they cleared the table and tossed it all?  We rushed back anyway and, to my delight, the same lovely hostess pulled our leftovers out from under the counter with a big grin.  Good food, great service AND saving leftovers for forgetful moms?  I simply cannot ask for more.

Except for hard cider on tap.  And they have that, too.

Stop in and give Super Six a try.  If the dinner prices are out of your budget, Happy Hour runs from 4-6pm and looks wonderful!  And while you’re there, watch out for me – I’ll be the one with the garlic fried rice, the caramel sauce and the loud, messy kids!