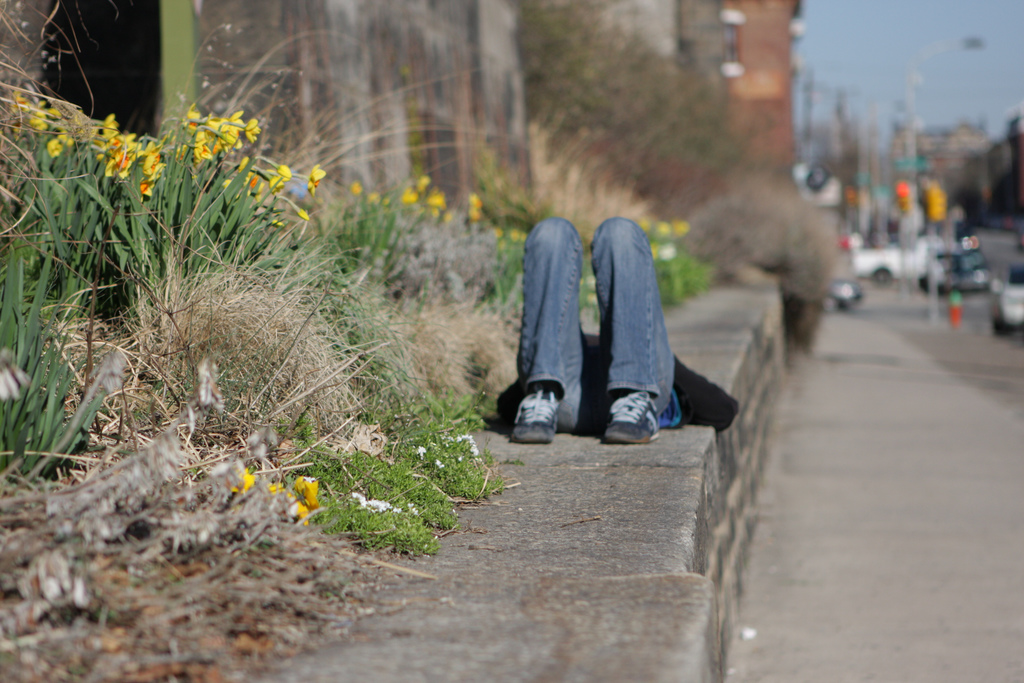 I’ve never seen him so dejected.  My friend Jackson*, who usually sports a smile and is always ready to offer an encouraging phrase, slumped through the room with his tall shoulders hunched and his face downcast avoiding my concerned eyes.  Before too long, I found out why.  The job he was so proud to have landed last week, was snatched from his grasp that afternoon when he showed up for training. When I saw him, withdrawn and angry, he’d just returned from this almost-job, “we don’t hire felons here” still echoing painfully in his ears.

When Jackson relayed this phrase to me, I was sickened and angered; exasperated by the horrible injustice of reducing my friend to such a pejorative generalization.  Jackson is one of the most hard-working, respectable, dedicated men I know – rejecting him based on his distant past with the criminal justice system is ludicrous – and infuriating.

And yet, I hesitated.  I myself have frequently marked the “no” box next to “have you ever been convicted of a crime” on job applications.  Unjust and infuriating, yes, but I wasn’t sure if Jackson’s employer was acting illegally or not.  None of my colleagues were sure either.  We figured this was just the way it is; just another point of injustice that the law ignores.

But, thankfully, it’s not!  Not in Seattle, at least.  I made a few calls and learned that within Seattle city limits, it is illegal to ask about criminal background in an initial job application. In November 2013 the City of Seattle passed the Jobs Assistance Ordinance which precludes “pre-screening” of applicants by asking about criminal history.  You may have heard of Ban the Box – shorthand for this ordinance and others like it around the country – which refers to the box on applications you must check if you’ve ever been convicted of a crime.

The Jobs Assistance Ordinance does not mean that all employers are banned from using criminal history as a pre-screening tool.  Patricia Lalley, director of the Seattle Office for Civil Rights notes that certain positions such as those working with children or vulnerable populations as well as certain government employers are still allowed to ask about criminal background on an initial application.

Nor does the Job’s Assistance Ordinance stop employers from considering criminal history at later stages of the hiring process.  Lalley explains that employers may still ask about a potential employee’s criminal background during an interview in order to assess whether the past offense relates to the job.  This is important because, as Lalley points out – the offense often is unrelated and shouldn’t deter employment.  For example, an applicant for a furniture delivery job should not be hindered by a past check fraud conviction. “It could be the crime has little do with driving a truck; it could be the crime has little to do with moving furniture,” she explains. “So the employer would have the opportunity to consider that when making his or her decision.”

The ACLU calls this an “individualized assessment” and Vanessa Hernandez, director of the Second Chances program at the ACLU of Washington, is adamant that such assessments are essential for applicants with a criminal history. Without them, applicants are too often treated as only a criminal record, rather than a human being.  As human beings, applicants are given the chance to dispute errors in their background check (“because there are huge inaccuracies in how these background checks are performed”), speak to the circumstances and mitigating factors of their offense as well as explain their own reform and rehabilitation.

An individualized assessment would have made all the difference for my friend Jackson.  As purely a “felon” he does not come off very well. If, however, you take a little time to speak with Jackson, you’d see much more. You’d realize it has been decades since he served his time. You’d see how he has reformed himself, changed his circumstances and committed his life to mentoring young people at risk of making the mistakes he made as a young man.  You’d experience his kind heart, compassionate outlook, deep convictions and faithful life.  It doesn’t take long to see all this; but it does take longer than looking at a checked box on an application.

Unfortunately, as seen in Jackson’s recent experience and despite the Ban the Box rules in Seattle, many employers here still fail to offer individualized assessments and often use criminal background as a pre-screening tool. Hernandez notes that complaints to her office of hiring discrimination are “routine”.  Indeed, she recently received a complaint from an individual who was “denied a job based on a non-conviction:…a single arrest that resulted in no conviction at all.”

This is where Hernandez and the ACLU’s Second Chances team come in.  In addition to operating a complaint line and offering referrals and direct legal action for those being discriminated against, Hernandez’ efforts can take on a surprisingly personal nature. She often personally calls employers who have been accused of discrimination.  She explains their obligations under the law and also shares some statistics about recidivism and re-entry: how unlikely it becomes for people to re-offend after a certain number of years and stable living circumstances – and how much a steady job is key to their ongoing success in the mainstream.  This is “not always” but “often” successful in resolving discrimination issues, Hernandez reports.

The City of Seattle Office for Civil Rights goes even a step further.  Lalley and her team take a proactive approach to pursuing employers who fail to ban the box in Seattle: searching craigslist and other online job postings for terms like “felons need not apply” or the box to check if you have a criminal history on applications.  Says Lalley: “…we look to see if posting[s are] in compliance with the law.  And if it’s not, we will file a charge – even without a claimant.  And we have the ability to do that.”

There is still a long way to go in making jobs access truly equitable for the 1 in 4 Americans with a criminal history.  Yet, Hernandez sees progress and cause for hope.  She has observed a greater awareness among employers – and the general population – that contact with the criminal justice system should not preclude one from employment.

Additionally, some major national corporations are setting a good example.  She points to the recent announcement by the Koch Brothers (Yes, those Koch Brothers) that they will ban the box on all their applications, joining the ranks of Target and Wal-Mart.  Starbucks is also jumping on board and has banned the box.  Starbucks CEO Charles Schulz’ says, in a letter to Senator Corey Booker that Starbucks’ goal in hiring is to “provide applicants with a criminal history the chance to be evaluated as a whole person…”.

While I’m pleased to see this progress, I’m also saddened that it is so noteworthy and has required so much effort for employers to agree to evaluate all applicants as whole people.  And yet, for so many – like my friend Jackson – being evaluated as a whole person is a right too often denied.  I’m proud that Seattle is leading the way in legislation to ensure equitable hiring practices and I’m humbled by the tireless work of the ACLU of Washington, as well as the relentless efforts of the City of Seattle Office for Civil Rights and so many others on the forefront of this important movement.

Marilee Jolin writes a regular column for the South Seattle Emerald. She lives in Beacon Hill with her husband Matt and their two daughters.

or complete the online intake form at https://action.aclu.org/secure/get-help-aclu-washington-criminal-records-project