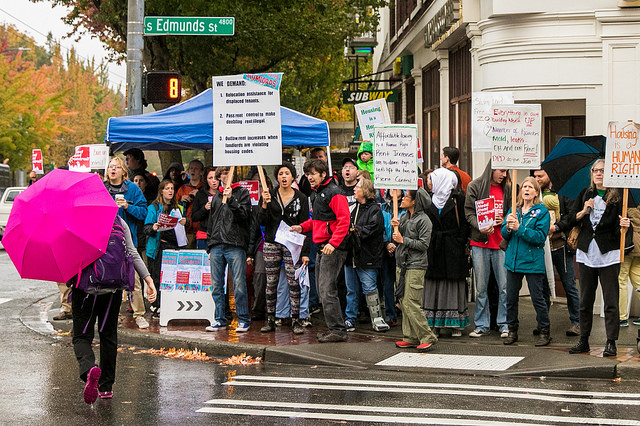 October 7th, Columbia City– More than 100 people gathered in Columbia City at 8am this morning to “stand up to the slumlords.”

Their protest was directed at one landlord in particular: Carl Haglund of Columbia City Condos and one of his apartment buildings, The Charles Apartments at 6511 Rainier Ave S. Haglund has recently raised rents – some by 100% or more – while conditions of the apartments remain “deplorable” and “appalling”, according to protesters, including rat infestations, mold growth, exposed wiring, roaches, no heat and more.

Despite a steady shower of cold rain, energy filled the air as protestors congregated on the corner of Rainier and Edmunds with signs, megaphones and raincoats. As numbers grew, the chanting began: “No justice, no peace! No rent increase!” Signs were held aloft with slogans like “Roaches + Rats = Rent Increase?” and “Rent Control Now!” Passing cars honked their support and the crowd cheered. Many officials and those running for elected office were in attendance to lend their support including Councilmembers Kshama Sawant and Mike O’Brien, County Councilmember Larry Gossett, and city council candidatesTammy Morales, Jon Grant and Bill Bradburd.

They were gathered to demand better conditions, reasonable rent and no more economic evictions. One protestor, Darlotta, said she came out that morning to “stand up to slumlords who are taking advantage of working people and poor people – especially in the immigrant community.”

Sahro Farah, resident at the building in question and a leader in the organizing work against Haglund, is herself an immigrant from Somalia. She spoke of her rent increasing overnight far beyond what she can afford as a single, working mother of 5. She told the Emerald that in her apartment there is mold, exposed electric wires, no heater and no hot water.

Connecting with the Tenants Union of Washington State helped Farah and other residents get organized to stand up to Haglund and demand their rights. Farah, The Tenant’s Union and other residents contacted the City Council last week and on Thursday Councilmembers Kshama Sawant and Nick Licata visited the apartments in person with media in tow. Soon after, along with Councilmember Mike O’Brien, they organized today’s protest to bring public pressure on Haglund to address the tenants’ complaints.

Their approach worked. The evening before the protest, Haglund issued a public statement in which he promised to offer residents free rent for the month of October. Additionally, the statement reads, “We will not implement the rent increases until the work to meet inspection is finished.” The statement emphasizes that Haglund is not a slumlord and did not know the condition of the building when he purchased it in July.

Sawant is non-plussed. She does not shrink back from the term “slumlord” when referring to Haglund and, while pleased to see him bowing to public pressure, does not trust him to follow through on his promises. “If you look at Haglund’s track record, we should not simply take him at his word and go home,” she emphasizes. “We have to continue our organizing work [to] hold him accountable to the promises he has made.”

She wants to see tangible results: October rent refund checks in mailboxes and workers in units making repairs. Sawant, Licata and Obrien have pledged to monitor this progress. Says Sawant: “We will be in solidarity with the tenants in a visible way until the problems are fixed.”

Additionally, Sawant said her office has received complaints from residents of Haglund’s other properties telling similar stories of poor conditions and rent hikes. In light of this, she says, they demand that Haglund make the same offer to all his tenants that he has made to the residents of 6511 Rainier: no rent increases until the building passes inspection.

In Haglund’s public statement he accuses Sawant of “grandstanding” with public protests instead of working for real change. Sawant disagrees and sees the action today as a prime example of how organizing, protest and media attention are essential and effective tools, particularly for those on the margins of society. “Bad conditions for tenants persist when tenants don’t have any political power,” Sawant says. “[But] when we organize, we can fight back against slumlords.”

And they are definitely organized. Farah, as president of the new chapter of the Tenants’ Union for her building, is a powerful force to be reckoned with. With the power of her community behind her and their impassioned belief that “in America everyone has equal rights” Farah is poised to make great strides for tenants in South Seattle. She is ready to take their message to the public at large, alerting them to this injustice. “Seattle, wake up!” she exclaims, the black scarf covering her head fluttering with her forceful words. “Everybody in Seattle – Wake Up!”

Sawant brought the rally to a close with a promise to continue helping tenants fight back, promising that she, Licata and O’Brien “will not back down until no one in Seattle is living in those conditions”, furthering her work on a full Tenant’s Bill of Rights and pursuing inspections of “every single unit” Haglund owns. Finally she invited everyone to join them again next Wednesday at a different Haglund property – location to be announced – to continue pressure until Haglund’s promises are met.

Sawant’s final words into the megaphone were drowned out by the crowd chanting in unison to the closed doors of Carl Haglund’s Columbia City Condos Offices: “We’ll be back! We’ll be back!”

One thought on “100 Plus Assemble in Columbia City to Demand Better Conditions, No Rent Increases From Local Landlord”