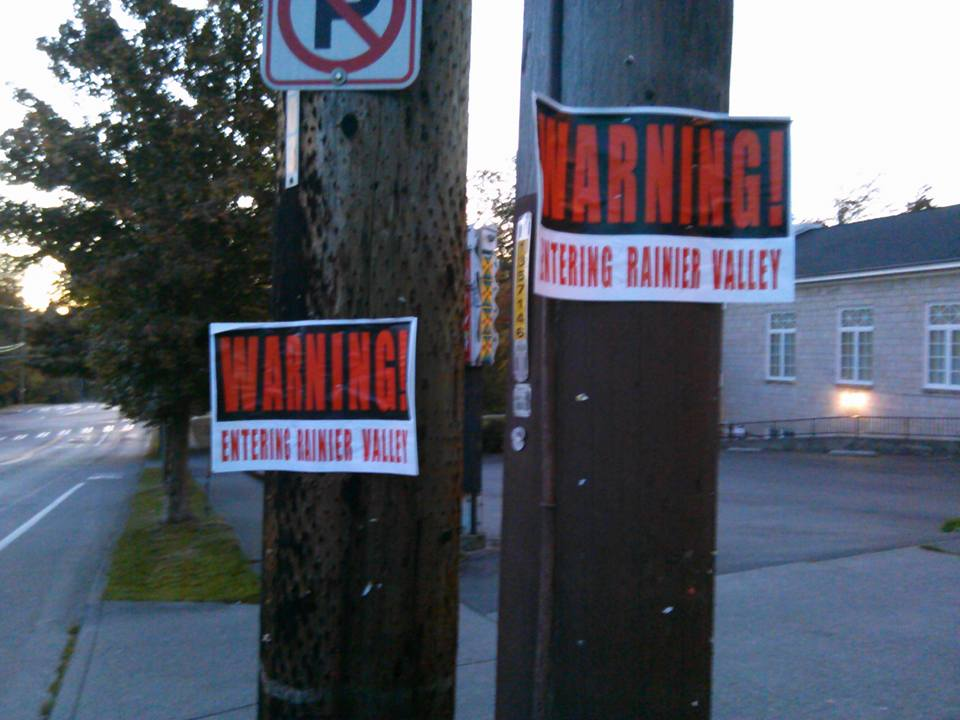 The “Warning! Entering Rainier Valley” signs were torn down prior to me seeing them in person.

My first thought about the signs was: Cool! That’s some Swiftian satire  in action. Or maybe Banksy-style guerilla-art social commentary. The gallows humor aimed at non-South Seattle residents’ attitudes and misconceptions about the Rainier Valley appealed to my darker instincts.

Perhaps the message was: “We own our danger.” The subtext being that it’s not as dangerous here as some would have you believe. But we understand our reputation. Enter if you wish to have your expectations upended.

After all, this is the city that, in the 1980s, was home to the fictional KBO movement and the infamous 1971 billboard that responded to the massive job loss of the Boeing Bust with this barb: “Will the last person leaving Seattle please turn out the lights.” It’s true, this city once had a sense of humor about itself.

But complaining about Californians moving to the Puget Sound, or taking a swipe at a city economy so tied to one corporation that sizeable layoffs could cripple it – those are easy, deserving targets. The warning signs in the Central District and the Rainier Valley – two of Seattle’s most controversial and misunderstood regions – that’s something different. Once any of us gets past whatever initial reaction those signs might stir in us, the uncomfortable truth is waiting beyond that.

According to the press release from Equal Representation Now (ERN), the group who created and put up the signs, the postings were intended to draw attention to “the problem of youth on youth violence in the area [that] is being overlooked by city officials.” You’d be hard-pressed to try and make a valid argument against that sentiment.

ERN’s press release goes on to talk about the violence and gun deaths that stained the summer of 2014 and continued through this past summer, calling out the sad fact that much of the violence is young Black males, attempting, and sometimes succeeding, in killing each other. (Curiously, ERN never includes the word “gangs.”)

Cast aside for a moment your ethnicity, socio-economic status and other factors that shade your reaction to the signs: The tactic worked. Like the infamous “Sanders Interruption” earlier this year, when the blowback passes, we’re left with the fact that the act itself got us all talking, and asking questions.

How does the rest of Seattle view the Central District and the Rainier Valley? Why can assaults on Capitol Hill – horrible acts that we all agree deserve attention and action – prompt a meeting with the mayor and an increased police presence, when young men of color senselessly killing one another gets what feels like a shrug from the rest of the city? Equal Representation Now asks these questions, just as many of us living in the RV and CD have.

The problems we face as residents of the Rainier Valley and Central District are myriad. Outside influences – institutional racism, a city government with puzzling spending priorities, the list goes on – can seem so abstract and woven into the political fabric as to be insurmountable. That’s another conversation entirely.

But local crime reports bear out a terrible story that is repeated too often: The young Black male is nearly an endangered species. So why do we step aside and let an entire demographic commit a sort of mass suicide? And perhaps more philosophically, why do these kids feel it’s a viable option? I don’t want our city-sanctioned crosswalk paint to be a series of chalk outlines.

So, good job, Equal Representation Now, your signs got a reaction. How will ERN, and those with responses big and small, move past the conversation and take action? Immediate action and work can and should come from within. But what can any of us do?

I’ll start: Vote. And encourage your friends and neighbors to vote. If the current roster in City Hall isn’t doing what you want, make your voice heard at the polls. Now that council districts are part of the election process, accountability has gone way up. Let our city leaders hear our voices with email and letters and Tweets. We can’t get the Mayor’s ear with silence. We can’t solve any of these problems through inaction.

And if you have the time and means, volunteer right here in the Rainier Valley. Organizations doing real work to provide opportunity, alternatives and – dare I say it – hope, are struggling all the time to keep their work moving forward. They’d love to have your help.

Those may seem obvious, but voter turn-out for local elections is repeatedly dismal, year after year. And perfectly good organizations working to help those who need it, close up shop all the time. We have to keep trying. We have to try harder. More of us have to try. And we have to try new approaches, even if, over time, we find those approaches fail. Doing the same thing, sitting back and waiting for change, is madness.