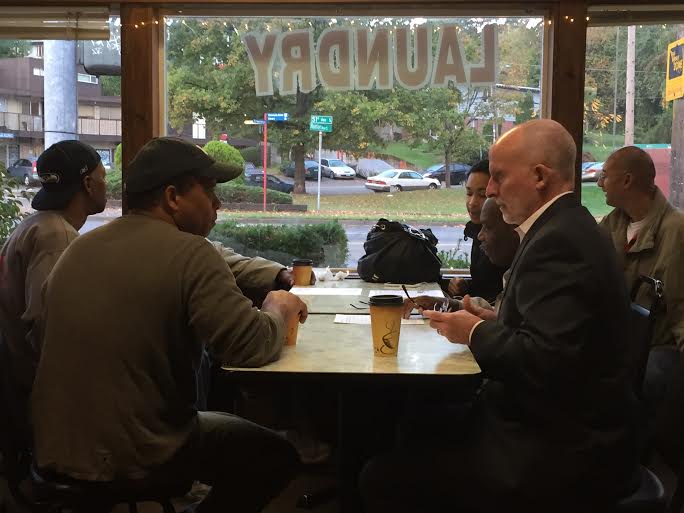 Editor’s Note: We asked two Seattle residents to make a case for each of the candidates running for Seattle’s City Council Position 8. The position is one of only 2 voted on city-wide. This is the second of those two op-eds. You can read the case for Jon Grant here.

We in the social justice movement have such an impressive advocate in Tim Burgess that we have joined together enthusiastically to support his reelection to the Seattle City Council.

His leadership on justice issues has made Seattle a better place for all of our children, for the immigrant community, and for our most vulnerable neighbors.

As importantly, we value the way he leads. Time and time again he has not only listened, but he has sought us out, to hear the needs and concerns of our communities.

He is not daunted by seemingly intractable problems, but finds innovative ways to address those concerns, leading to change in important public policies.

Here are some examples of Tim’s leadership that have impressed us and earned Tim our respect, trust and support.

In the middle of the economic downturn, our communities urged the city to continue its investment in academic and health programs for our children. Tim stood up and made the startling suggestion that we double these investments—and the voters agreed.

He convinced his colleagues to extend a small but effective program pairing nurses with first-time, low-income moms and dads so that any qualifying family may participate. Seattle was the first city of its size to fully fund the Nurse-Family Partnership. The New York Times calls it America’s best anti- poverty program.

Tim was the lead architect and champion of Seattle’s life-transforming, high quality preschool program designed to eliminate the academic achievement gap for our kids. He helped design this publicly supported preschool program that pays teachers on par with K-12 teachers, provides in- classroom coaching, and tuition support for teachers. Tim cares about developing a professional preschool workforce so that all of our children will have the building blocks to thrive in school.

Immigrant communities have long felt unheard in city government. Tim led the way to create a new city Office of Immigrant and Refugee Affairs to welcome our new Americans.

Tim led the effort to establish a gun violence tax, so the gun industry helps to pay for the damage their products cause. Tim’s leadership on common-sense gun safety measures has been strong and unwavering. He cares about the public safety of all Seattle’s communities.

Tim has been a consistent voice for police reform and better policing. He wrote the legislation repealing a 35-year ban on hiring police commanders from outside the police department, which allowed Chief O’Toole to hire new leaders who aren’t tied to the old culture of SPD. Tim supports making the Community Police Commission permanent and strengthening civilian oversight of police services. He has been a strong leader for fair and professional policing in every Seattle community.

Tim was one of the first local officials to speak out against the failed policy of mass incarceration. And he didn’t just speak against it. He persuaded the state’s Department of Corrections to test a new approach to prisoner release called “swift and certain.” It worked and has now been spread statewide, saving millions of dollars in prison costs, holding released offenders accountable, and allowing many to successfully reintegrate into the community with their families instead of being sent back to prison. Tim has also been a strong advocate for alternatives to arrest, such as Seattle’s innovative Law Enforcement Assisted Diversion (LEAD) program.

These are just a few examples of Tim’s effective leadership on the City Council. This is why we are supporting Tim’s re-election. He gets good things done. He is a proven, progressive and effective leader for all the people of Seattle.

The signers of this letter are endorsing Councilmember Burgess’ election as individuals. Their title and organization names are for identification purposes only.

3 thoughts on “The Case for Tim Burgess”