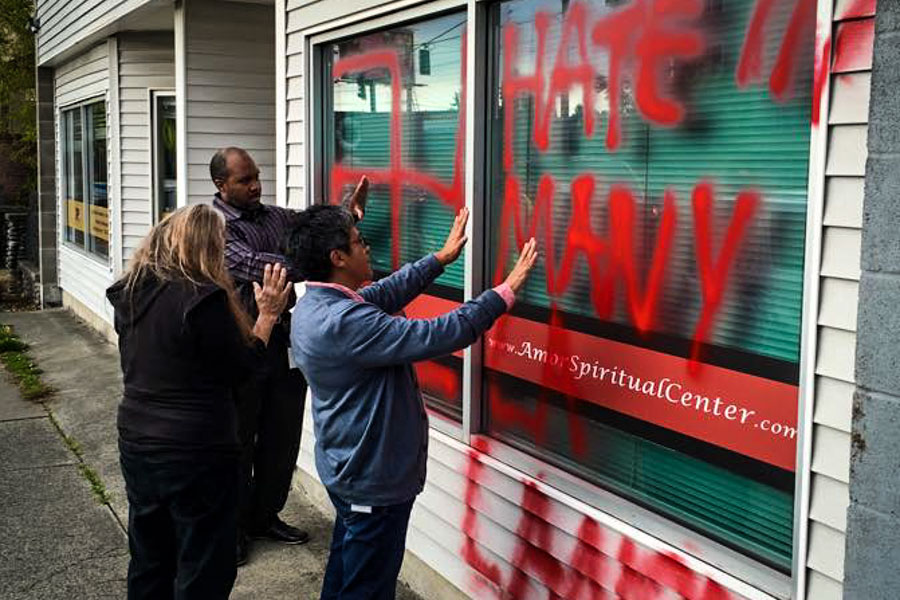 Rev. Allen Mosely got the bad news about vandalism of the Amor Spiritual Center from a neighbor who was deeply concerned.

“And I would have to say that message was so loving and so comforting it just set the tone for the day,” said Mosely, spiritual leader and founder of the Amor Spiritual Center.

The Amor tagline is “Love in Many Languages.” The vandalism scrawled across the window in red spray paint stated the exact opposite.

The Amor Spiritual Center is a community dedicated to self-love and self-empowerment that strives to provide a safe space for anyone and everyone to express and explore their spirituality. For the past five years Amor has made its home on Beacon Hill and played host to musicians, self help gurus, aspiring writers, and many more who have gathered with the intention to better themselves in a supportive community.

It has been my community, my safe space since 2011 and when I saw the picture of someone’s message of hate, my immediate reaction was one of deep sadness.

“I was saddened that this was someone’s outcry for love or their outcry for support and that this was the only way they felt like they could do it, but I was not hurt. I did not take it personal,” said Mosely. “I just went instantly into love.”

In our conversation Reverend Mosely spoke only briefly about the graffiti and instead focused on the outpouring of love. “It was overwhelming all the love I received. It was just mind blowing, so whatever the intent, whatever the origin, none of that mattered to me, because I received more love today than I probably would have had that event not happened.”

Love showed up in the form of neighbors and local business owners who dropped by to show their support. It also came in the form of a special gift from the students and teachers of the Beacon Hill International School, many of whom pass Amor on their walk to school. The vandalism prompted a class discussion about hate crimes and the students created banners with messages of healing to cover up the hate.

“This was just the perfect expression of love in action. The message from the kids was be kind and don’t bully,” said Mosely. “So the inside of Amor is covered with art from all these kids. Its absolutely incredible.”

It’s this relentless optimism that first drew me to Amor and to Rev. Mosely who became my life coach. He supported me through the process of leaving a toxic work environment and pursuing my dream of starting my own study abroad program.

I used to wonder how he could be so continuously positive. Here was a man who had been diagnosed with cancer twice and has experienced all manner of trials and tribulations; yet, he is rarely without a smile.

It’s his smile that has become for me the new face of resilience: not simply enduring life and struggling through the hard days, but actively choosing joy in spite of everything. What I have learned from being a part of the Amor community is that while you can’t always choose your circumstances you can always choose your actions.

Seeing my sacred space desecrated made me cry. I felt furious that someone would intentionally shit on my safe space, but that anger quickly dissipated into a deep sadness. I want to believe the best of people. I want to believe that the civil rights movement meant something and that all the activists who have struggled before me to hold this country accountable for its promise of equality didn’t fight in vain, but then something like this happens and I lose faith. But then I also began to feel the love as friends and loved ones reached out to comfort me and to ask how they could support our community.

It could have been much worse. In Ferguson, churches are burning. We are all still grieving with the families of victims of the Charleston shooting. People with hate in their heart have been systematically targeted places of worship to create victims of intolerance.

In this instance no one was hurt and the only damage done is easy to repair, but it’s the spirit behind it that bothers me the most. Seattle’s liberal façade has shown its ugly underbelly far too often recently. It has made me question my community and question the illness, the lack of humanity seemingly hidden — or in this case not so hidden — in our midst.

Once again I return to the lesson I’ve learned from Rev. Mosely.People might choose to hate, but love is also a choice. I can’t control the thoughts or actions of others, but I do have power over my own expression of humanity. Rather than becoming inured or desensitized, rather than staying in a space a blame or victimhood, I am choosing love. I will stand in love for myself and for my community even when it includes people who wish me harm. More than a choice, love is a transformative power, something graffiti cannot tarnish, that hate cannot diminish, that even fire or bullets cannot destroy.

When I asked Rev. Mosely why he first chose to create this community he answered simply: “There was an internal knowingness that there had to be a community that could live somewhere outside of religion, somewhere outside of the norms of society that could create a center of love and that everyone who came in was honored and valued for who they were and for where they were and most importantly that everybody could have a safe space where they could get the love they need.”

“Stand with us, support us, love us, and love the work we’re doing,” Mosely said.