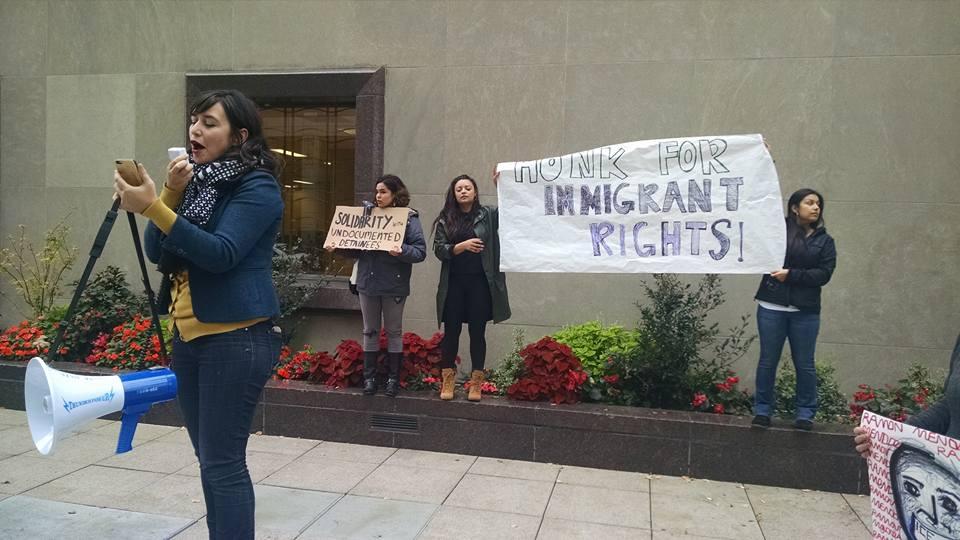 Defiant and resilient chants made the air heavy in Downtown Seattle on Tuesday October 13th.  From the sidewalk of Marion and 2nd Ave, twenty-five floors below the Immigration and Customs Enforcement (ICE) Seattle Field office windows, activists and organizers from Western Washington’s black and brown communities came together to speak with one voice.  They came together to express outrage and condemnation of this country’s inhuman Deportation and Detention policies.

The event was a collaboration between EPIC (Ending Prison Industrial Complex) and Northwest Immigrant Detention Center Resistance.  A young lady who helped organize the event explained, “One of our goals was to bring attention to the unjust detainment and criminalization of people of color.  Also, we are really excited that members of EPIC who have been fighting the Youth Jail in Seattle are now supporting and beginning to build with folks in Tacoma who are also fighting the Prison Industrial Complex.

Earlier in the day, Human Rights Activist Ramon Mendoza Pascual had a bail hearing at the Northwest Immigrant Detention Center in Tacoma. That hearing was as short as the Judge was sour.  Pascual was swiftly declared a flight risk and danger to society.  Bail was denied without any real explanation.  A larger protest had followed immediately in Tacoma.  This solidarity demonstration in Seattle took place about six hours later.

Ramon was a key organizer of the wildly successful hunger strike in the detention center during the spring of 2014.  At it’s height, more than three quarters of the  massive facility’s detainees participated in the collective fast.  It was successful in bringing to the attention of the rest of the world squalid, sub-human, super cost cutting conditions that existed in Tacoma and at countless other detention facilities across the land.

Additional acts of civil disobedience were successful in spreading knowledge of inhumane policies which drive and insure constant profitability in the immigrant deportation industry such as bed quotas(Congress has passed laws which make it so ICE must have at least 34,000 immigrants in detention at all times).  All of the other leaders in Tacoma Hunger strike have already been deported.

At the event, a woman who was a friend of Ramon’s family spoke about the strength his wife and children have displayed throughout this struggle.  Organizers of the action talked about the impact of America’s broken immigration system on their own lives and families.  Lawyers gave legal updates and shared some thoughts.  Someone read a message from Ramon thanking everyone for their support and vowing to never stop fighting unjust detention and deportations.

Outside the Seattle ICE, some of the signs read “Black and Brown Unidos (Unity)!” and  “Tu Lucha es Mi Lucha(Your Struggle is My Struggle)”.  I remembered a time it was explained to me that much of the migration that happens from Mexico to this country, happens because the income disparity is so great there.  The rich get richer and the poor get poorer at an even greater rate than is happening in the United States.  Historically, families in Mexico had been able to support themselves through farming and selling crops.  Free trade agreements, like NAFTA (North American Free Trade Agreement), made it so crops like corn had to compete with cheaper strains of imported corn grown on big farms in the United States.  The bottom fell out, family farmers from Mexico could not compete in local markets.  Narcotics became one of the only thriving industries south of the border.  Body counts keep piling up.  It’s not an occupation with a future, there either.  In some communities I’ve lived in, it feels as if black people are no longer needed for the American Economy.  Sometimes it seems prisons are made for us. These are reasons we also fight the Prison Industrial Complex.

Immigration is not just a brown problem.  Incarceration is not just a black problem.   Black people get deported and brown people get locked up.  Africans also have problems with Immigration and Customs Enforcement.  It is a story that has rarely been told, a plague only acknowledged by the ones going directly through it.  There are growing numbers of Africans, especially Somalis, in the North West Immigrant Detention Center.

Men and women come to this country in search of a stable life for themselves or their families.  Some come for safety, fleeing war or tribal beefs.  Others arrive in search of opportunity.  Immigrants move around for many of the same reasons black families from this country relocate.

The afternoon was epic.  My hope is that one day this protest might be remembered as the beginning to a long and fruitful relationship between powerful black organizers, bringing people together to stop mass incarceration, and passionate brown organizers bringing people together to end unjust deportations and detentions. Solidarity means so much more when sustained over time.  One of the organizers from Tacoma asked me to share these words with South Seattle Emerald readers:

“If you really care about this, tell people to come out to the detention center and see what it is like.  You feel the oppression…  I’m serious…  If you really want to stand in solidarity, come sit with us in the court rooms.  Imagine what it feels like to walk in our shoes.  This is how a racist and fucked up system looks in real life…”

I found my way to this rally because Andrea Lopez-Diaz invited me.  Andrea is a anti-racist community organizer who is part of YUIR (Youth Undoing Institutional Racism) and EPIC (Ending Prison Industrial Complex).  I went because I understand how our struggles are not the same, but they are connected.  I went because some of the same corporations and individuals who profit from criminalizing and incarcerating black bodies are the same who are profiting from stigmatizing and detaining brown bodies.  I went because I believe when black and brown communities see humanity and support each other we have all the power we need to shape the better world that we and our loved ones really deserve to live in.

James Akbar Williams is a South End based organizer, educator and writer.