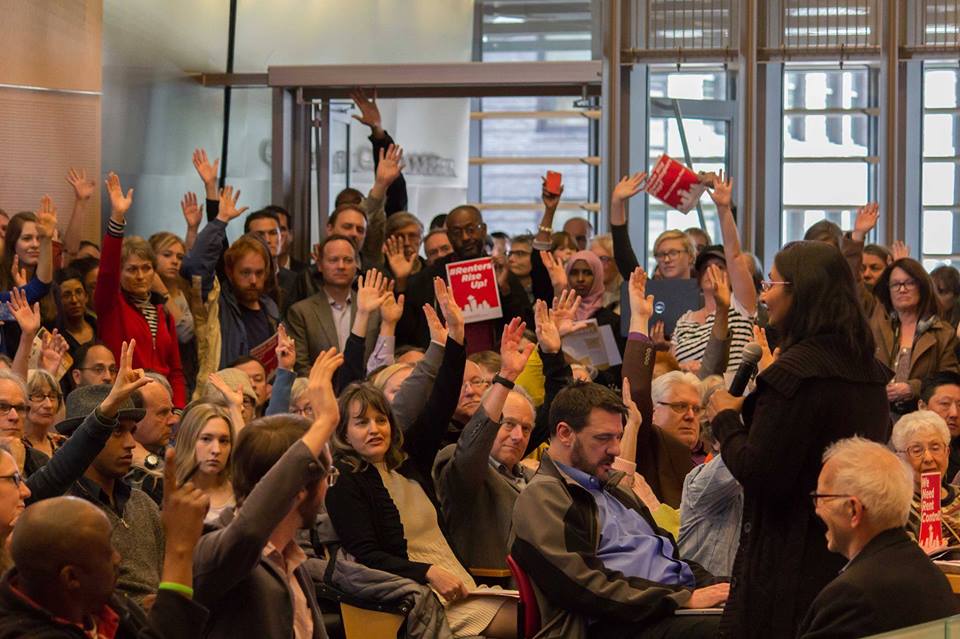 Went to the People’s Budget Hearing at City Hall last Tuesday that Kshama Sawant put together. Although Mayor Murray tried to paint these events as “electioneering” they are perfectly legal, ethical & even necessary. It’s just that no other councilmember before Kshama ever thought to do them. Hmm, fancy that: she’s the first CM to ever think to engage people in their own City Hall. (BTW it’s not like there’s anything else going on there at night.)

Some reporters have carped that these hearings are just an echo chamber, and sure, there are always plenty of familiar faces in attendance. But what they really are is an organizing tool; inviting regular working and poor people to physically step onto the marble floors of City Hall and view the facilities as a place they are encouraged to inhabit and occupy.

I could easily have stayed home and watched the hearing on the Seattle Channel but I go to these things to get a read of what the vibe/temperature is out there and to see people/activists I wouldn’t know about through the normal channels of Twitter, etc. For example, it’s astounding how many homeless people are actively organizing around many of these issues and for Kshama in particular. People who are struggling to take care of basic human needs are coming to these things. This is wild in civic politics. How many folks like that are you gonna see at a Burgess or Harrell event?

I met this one guy who’s homeless, he’s paying $10 a month to maintain Internet service (I think through Verizon). He uses it to communicate with his doctors and to update out-of-state family on his deteriorating medical condition. Can you imagine? He’s as vulnerable as it’s possible for a human to be and STILL some telecom corporation manages to extract $10 a month out of him (prepaid every 3 months). When is enough enough? This man was excited about the prospect of municipal broadband, which was widely discussed tonight.

Echo chamber or not, I would’ve never known what a guy like that was up against without an event like the People’s Budget. I don’t want to sound maudlin here but these events are the only times I see the power differential even out in real time/space. You might be able to tell someone’s homeless by their clothes, maybe, or the fact that they’re holding a sign that says so. But when they’re in City Hall, they’re there doing the people’s business. Instead of a sign that says “Spare some change” the sign says something like, “Without shelter people die.” They’re reaching beyond just their immediate circumstances to something bigger, maybe for the first time. Here they’re someone whose presence is valued, whose input is encouraged. They meet your eye in a way they wouldn’t out on the sidewalk. Their very real and specific needs are being turned into actual public policy (shelter, transit, municipal broadband to keep in touch with a worried family in Michigan). If you can take people in these truly desolate circumstances and help them claim ownership of the vaulted ceilings and modern fixtures of City Hall, well dammit I think you’re onto something HUGE.

Brett Hamil is a Beacon Hill based comedian and social critic.