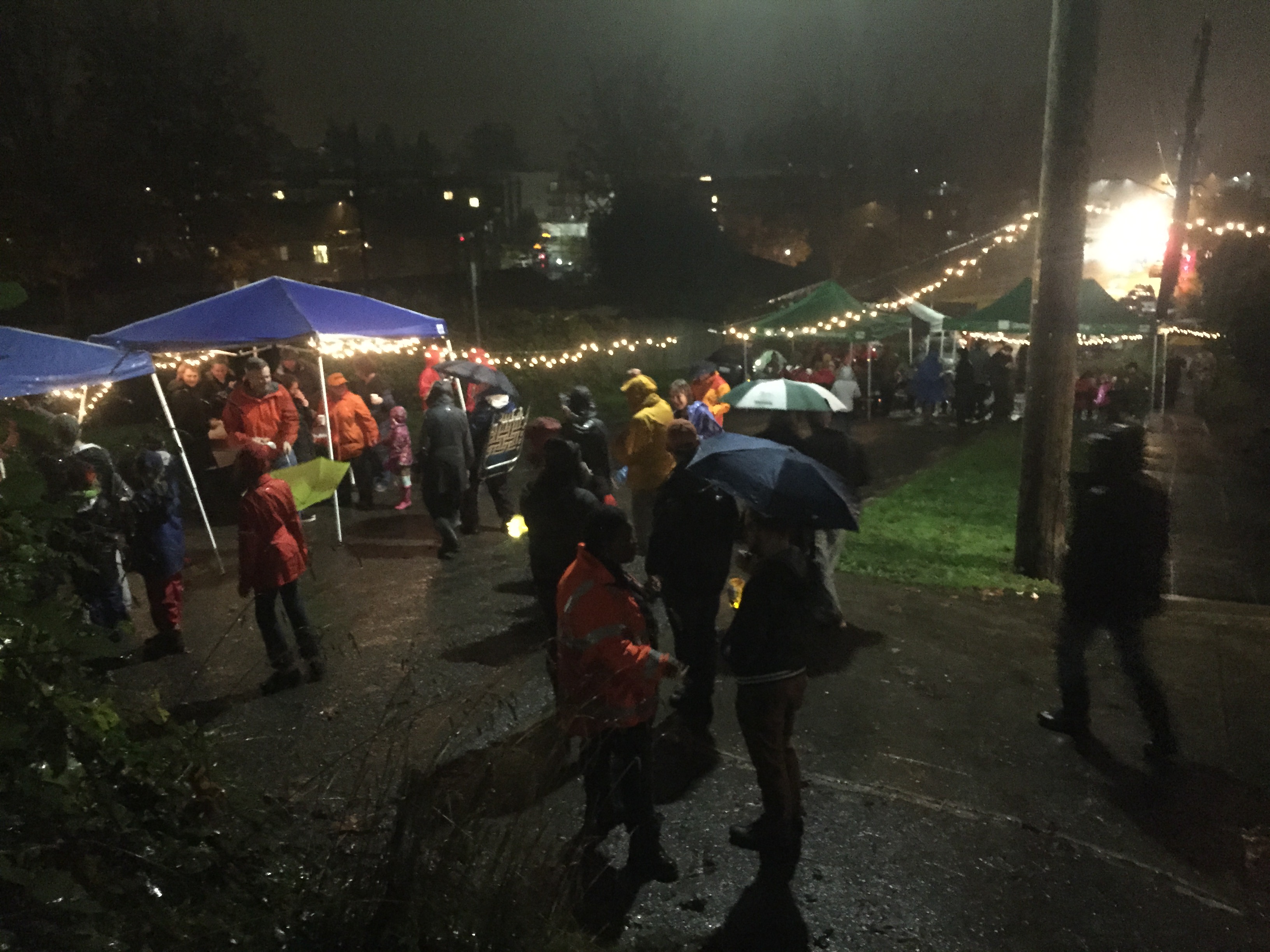 Words and photos by Emily Williamson

“As the nights grow seasonally darker, we will welcome the autumn change by gathering together in lantern light! This event celebrates the light that we each carry, and the positive light a community has when they choose to shine together in the darkness…The Lantern Walk is a walking event through our community, encouraging us to connect with one another, and our landscapes, by sharing light with our neighborhood.”

The words on the invite, set against photos of luminous paper lanterns, drew me to participate in this year’s walk. I invited a couple friends to join and they eagerly accepted.

The evening was cool and rainy but that did not deter over 100 participants, including many families with young children, from coming with their homemade mason jar lanterns. We gathered at the entrance to the Urban Farm, underneath tent canopies where volunteers sliced up fruit and vegetable snacks. Several local nonprofits hosted the event: New Rainier Vista, Greenseattle.org, Cheasty.org and Seattle Parks & Recreation. Before we began walking, a woman who serves as a community builder at Rainier Vista gave a safety update about the newly installed traffic bumps. Next, a neighborhood volunteer reported on the forest restoration project that began in 2007 and invited all to join the community work parties that occur twice a month—every first and third Saturday. The Columbia City family choir sang several songs about light then distributed paper copies of the Lantern Walking Song for everyone to sing as we walked.

I’m walking with my lantern,

My lantern goes with me.

Above the stars are shining bright

And here on earth shine we.

The cock does crow, the cat meows,

“What are you doing?” an onlooker we pass on the sidewalk asked.

“We’re bringing the light of community into the dark of winter,” a volunteer leader replied.

As we walked, I overheard neighbors discussing nearby locations such as Garfield High School and Rainier Vista.

“This area was like a war zone forever; now everything’s like brand spankin new,” one long-term neighbor explained to a newcomer.

“I had no idea so many houses were back here!”a visiting senior-aged man exclaimed.

I conversed with a middle-aged mother who told me that her daughter has volunteered with a friend to help recover the woods. She was excited that the trails would soon be ready for hikers, mountain bikers and even wheelchairs!

The walk concluded in an outdoor setting glowing from a series of tent canopies outlined in miniature white lights. Underneath the tents, volunteers served pumpkin bread from Borracchini’s Bakery and hot cider from Tin Umbrella. A small crowd gathered around a fire pit underneath one canopy and began singing and strumming a guitar to timeless tunes such as “This Little Light of Mine” and “Ring of Fire.”

“It’s good for neighbors to make connections and for kids to plant something that’ll be around in 100 years,” Ryan, a participant who volunteers with Cheasty.org told me.

He informed me that these woods have had the biggest volunteer turn out of any park in city. A few years ago, the overgrown forest attracted drug deals, transient inhabitants and prostitution. Now, as a result of grant funding and volunteer work, the overgrown woods are changing from “green spaces to green places”. I had previously heard controversial opinions about installing mountain bike trails here, but Ryan explained how Cheasty values inner city youth getting into woods and having options that appeal to them like mountain biking.

“Green spaces are a great asset to the  South End,” Ryan surmised.

I asked Ryan who the primary organizer of this event was and he pointed me to Mary Plate DeJong. She told me this event could not have happened 8 years ago and is the result of over 7000 volunteer hours. Mary expounded on the thoughtfulness behind the event, saying:

“So this is our third year of doing this. The first year was cancelled because of high winds. Last year was kinda tied to a little girl in the neighborhood who was in a hit and run. She survived but the Mayor was a part of last year’s event. So it’s become kind of a way in which we can identify what’s annually going on but then also it’s just good to be together. And we’re very intentional about connecting it to the farm and the forest—how does our land participate in our communities? Because in an urban setting you can become really disconnected from those two pieces—from food and nature, which is the forest. So there’s a lot of intention behind what I hope is just a real fun, festive feel which I think is hopefully it.”

The lights, the music, the food the camaraderie all created a festive feel. Yet the Lantern Walk also brought people together and connected us to nature in our neighborhood. I’ve lived just blocks away from Rainier Vista for over four years and never knew an urban farm was located there. Nor had I hiked the Cheasty trail just minutes from my house. Having such a positive experience in the dark and rain, I look forward to returning in the daylight!