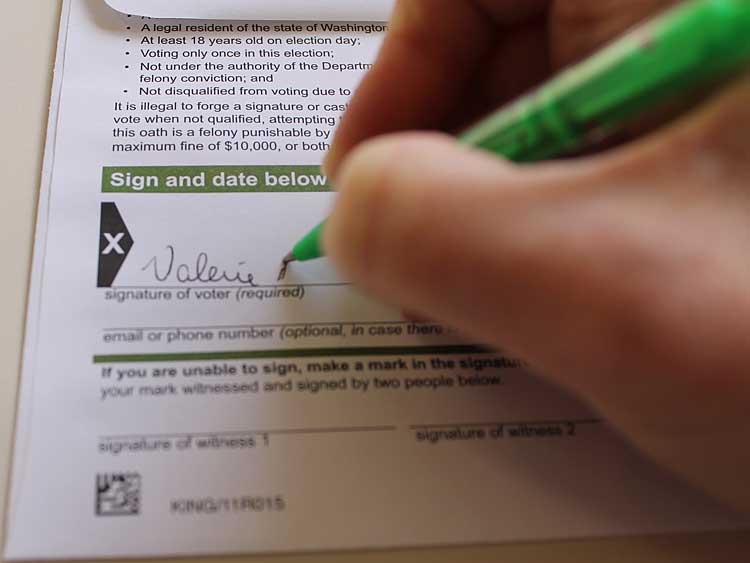 The 2015 King County General Election — featuring state, county, city and port candidate races as well as important propositions and initiatives – generated a variety of interesting results. This article assesses the election — not by providing race by race discussion, but rather by attempting to identify major themes. It is divided into three sections: candidate elections, propositions and initiatives, and closing observations.

Nationwide, since Obama’s 2008 election, Democrats have lost over 900 state legislative seats and control of 30 state legislative chambers. Unfortunately, Washington State has not escaped this trend. With Republican Terry Hickell’s defeat of Democratic incumbent Carol Gregory for State Representative in the 30th Legislative District, the Washington State House of Representatives is now 50-48 in favor of Democrats. This two seat advantage is down from the 28 seat advantage (63-35) of 2008. Given the enormous implications for policy if the House changes control, it is predictable that elections occurring near the 49-49 breakeven point will be aggressively financed by special interest groups. Nearly $2 million (about $60 per ballot) was spent in this election, with Hickell accounting for roughly 60% of it.1

The King County Council elections, however, proceeded along liberal lines. In the nominally nonpartisan race to represent the Eastside in District 6, Democrat Claudia Balducci defeated Republican Jane Hague despite being outspent by a ratio of 2½ to 1. In Bellevue (like Seattle), population growth has heightened the importance of transportation – a field where Balducci has considerable experience (e.g., Transportation Policy Board Chair for the Puget Sound Regional Council, Sound Transit Board, etc). In a post-election analysis, Crosscut’s Knute Berger observed that population growth and its attendant challenges (transportation, housing, services, etc.) tends to favor Democratic candidates, leading another analyst to assert that, “Density equals Democrats.”2 In two Bellevue City Council races, the more liberal John Chelminiak (Position 3) and Vandana Slatter (Position 5) hold narrow leads over their more conservative opponents.

The Seattle City Council elections marked the first time in over a century where elections (seven out of nine) were held on a district by district basis, rather than at-large. This was intended to: lower the cost of races, allowing a greater number of candidates to run — and they did (47 candidates were on the primary ballot); foster greater candidate-voter interaction at the neighborhood level – which, by all accounts, it did; and promote diversity — which it also did (the council will likely be comprised of four minority members and five women). As usual, incumbency produced advantages. Of the six incumbents standing for re-election (Harrell, Sawant, Godden, O’Brien, Bagshaw and Burgess), five made it to the general election (all but Godden in District 4), and each is likely to win their race (although the Harrell-Morales race is still too close to call). One interpretive framework for the City Council races was that there were genuine reformers willing to challenge the pro-developer nature of Seattle’s growth strategy (e.g., Herbold in District 1, Sawant D3, Maddux D4, O’Brien D6, Bradburd D8 and Grant D9) running against more pro-establishment candidates (e.g., Braddock D1, Banks D3, Johnson D4, Weatbrook D6, Gonzalez D8 and Burgess D9). While it is easy to overstate differences in some races using this framework, the framework is nevertheless useful, and it appears that the pro-establishment wing has been more successful in this election. Indeed, all but two of the candidates (Banks and Weatbrook) endorsed by the conservative Seattle Metropolitan Chamber of Commerce are winning their races (although again, several races are still too close to call). As always, money was also a significant factor. In seven of the nine races, the winner (or current leader) outspent their opponent — often considerably; and in the other two races, the spending levels were essentially the same. It is also notable that the Sawant-Banks race – offering a stark contrast between a Socialist candidate and a more centrist Democrat – set a record for money raised in a Seattle City Council race (roughly $700,000).

Several races may have been significantly influenced by the Seattle Times/Stranger endorsement dynamic. Both periodicals endorsed John Wilson for King County Assessor, and he defeated incumbent and favorite Lloyd Hara. Both endorsed Julie Wise for King County Elections Director, and she handily defeated multiple-term State Representative Zack Hudgins. Both also endorsed Claudia Balducci, who defeated incumbent and favorite, Jane Hague. The Stranger also reversed its primary election endorsement of Bruce Harrell in favor of Tammy Morales, and Harrell’s 62% result in the primary fell to a several percentage point lead over Morales in the general election, in a race that is now too close to call. Of the 19 races in which both periodicals endorsed a candidate, there was no race where neither endorsed the winner; ten where they both endorsed the winner; four where The Times alone endorsed the winner; and five where The Stranger alone endorsed the winner.3

The importance of district elections was also demonstrated outside of Seattle. Yakima, a city with a 40% Latino population, had never elected a Latino to its seven-member council. Historically, the city held at-large elections, enabling white candidates to benefit from their citywide demographic advantage. The ACLU prevailed in a lawsuit that challenged this at-large system, arguing that it denied Latinos’ electoral interests. In this election cycle, Yakima utilized district elections (with Latinos in the majority in some districts), and the results were compelling — two Latino candidates have won, and a third (Carmen Mendez) is leading her opponent in a close race. All three are women.

Seattle’s $930 million “Move Seattle” transportation package (Seattle Proposition 1) passed by a surprising margin of 18%. King County’s “Best Start for Kids” (King County Proposition 1) also passed. Critics argued that both were expensive and lacked sufficient project specificity, but in a rapidly growing city characterized by traffic congestion and educational achievement gaps (Seattle is amongst the worst in the nation in both areas, perhaps it is not surprising that both measures passed.

Predictably, the most alarming initiative result was Tim Eyman’s I-1366, which calls for the State Legislature to institute a supermajority requirement to raise taxes, or else lower the state sales tax by one percent. This measure is failing in King County (and several others), but passing statewide. It will likely be challenged legally and then struck down by the courts (it fails to comply with two initiative requirements). Nonetheless, the passage of this measure represents Washington State voters’ indictment of themselves. Several observations are in order. First, Washington State has become a low tax state – it has fallen from 11th highest to 14th lowest in state and local taxes as percent of personal income since 1995 (largely due to Eyman initiatives). This has spawned a number of funding challenges – inadequate K-12 spending which precipitated the McCleary decision, inadequate mental health capacity, excessive DSHS caseloads, etc. Indeed, the State Legislature is in contempt of court for failing to establish a revenue source for the required additional K-12 expenditures. Against this backdrop, voters want to lower taxes – a mind-boggling display of ignorance and/or apathy. Second, it needs to be emphasized that voters are voting to constrain the spending decisions of the very officials they elected to office. That is, they are effectively voting to express dissatisfaction with themselves. Third, while Eastern Washington voters vote to reduce taxes, they concurrently support the K-12 levy swap, which transfers a portion of the K-12 tax burden to Western Washington. Fourth, in my view, Eyman operates a nefarious enterprise. He strives to degrade the state’s democracy (by requiring a 2/3 requirement to raise taxes) as the mechanism by which he capitalizes on voters’ perpetual emotional desire to avoid taxes, in order to financially enrich himself (both legally and illegally). Fifth, I disagree with the common sentiment expressed by elected officials after Eyman initiatives are passed by the electorate – that it is important to take this expression of voter sentiment to heart. Instead, I believe that elected officials should provide a genuine service to voters and tell them the truth – Eyman’s initiatives and their passage are an embarrassment to the state.

Initiative 122 for honest and fair elections has won by an amazing 25%. This is a publicly funded election model based on the use of citizen vouchers. It seeks to simultaneously increase candidate-voter interaction and reduce the prevalence of special interest money in local elections. The Seattle Times, who opposed the initiative, claims that the I-122 campaign is “…steeped in irony” because it raised money from outside Seattle in order to effect policy that reduces the influence of special interest money in politics.4 I see this in the exact opposite terms. The I-122 campaign understands that money is a major driver of election results, and therefore raised money to effect policy that ensures that the corrupting effect of special interest funds do not play an oversized role in future elections. In Seattle, roughly 0.3% of voters account for 50% of campaign donations.5 I-122 seeks to redress this imbalance. It is also worth noting that Seattle’s district elections and I-122’s campaign finance reforms will mutually reinforce each other – both will increase the number of candidates, promote candidate diversity, and increase the frequency and depth of candidate-voter interactions.

I-122 is also symbolic of a broader trend. With the U.S. Congress and state legislatures increasingly characterized by gridlock, there is a growing movement for cities to become incubators for policy change. Seattle has emerged as a leading progressive force in this movement, playing a primary role in numerous areas: gay marriage, medical and recreational marijuana legalization, the $15 minimum wage (Tacoma raised its minimum wage to $12/hour in this election), gun control, district elections, and now (along with Maine) campaign finance reform. Regarding I-122, Yale professors Bruce Ackerman and Ian Ayres write:  “With appropriate revisions, the ‘Seattle idea’ can be taken national and serve as a litmus test of political seriousness for presidential candidates, who no longer should be allowed to pretend that only minor reforms are possible until the court reverses its decision in Citizens United. The time for action is now.”6

Some elections can be summarized via a single, overarching theme. Others – like this election – yield a number of (at times countervailing) insights. One area where this election was somewhat idiosyncratic was with voting dynamics. Voter turnout (estimated at roughly 40%) is concerningly low. In addition, the theory that an incumbent who does not achieve 50% of the primary vote will be vulnerable in the general election has been turned on its head. Burgess (who had 46% of the vote in the primary) and Sawant (52%) have secure leads in the general election, while Harrell (62% in the primary) does not. As is commonly known, late voting tends to support more liberal candidates. This phenomenon is tightening several elections (most notably Braddock-Herbold and Harrell-Morales). A second observation is that there are signs of progressive progress on multiple fronts throughout the state — district elections, campaign finance reform, transportation (and transit) funding, early learning investment, an increase in K-12 spending, minimum wage increases, marijuana legalization, gay marriage, gun control, initiatives to introduce a price on carbon in Washington State (Carbon Washington’s I-732 and a pending proposal from The Alliance for Jobs and Clean Energy), Governor Inslee’s Clean Air Act initiatives, etc. Satisfaction with this progress, however, needs to be tempered by major concern in a third area – the ominous loss of the 30th Legislative District and the ever-shrinking Democratic majority in the Washington State House of Representatives.

John Stafford is a Senior Substitute Teacher for Seattle Public Schools and a former management consultant in corporate strategy in Washington, D.C.  He recently completed a run for State Senate in the 37th District.  He is writing a monthly article on public policy for the South Seattle Emerald.