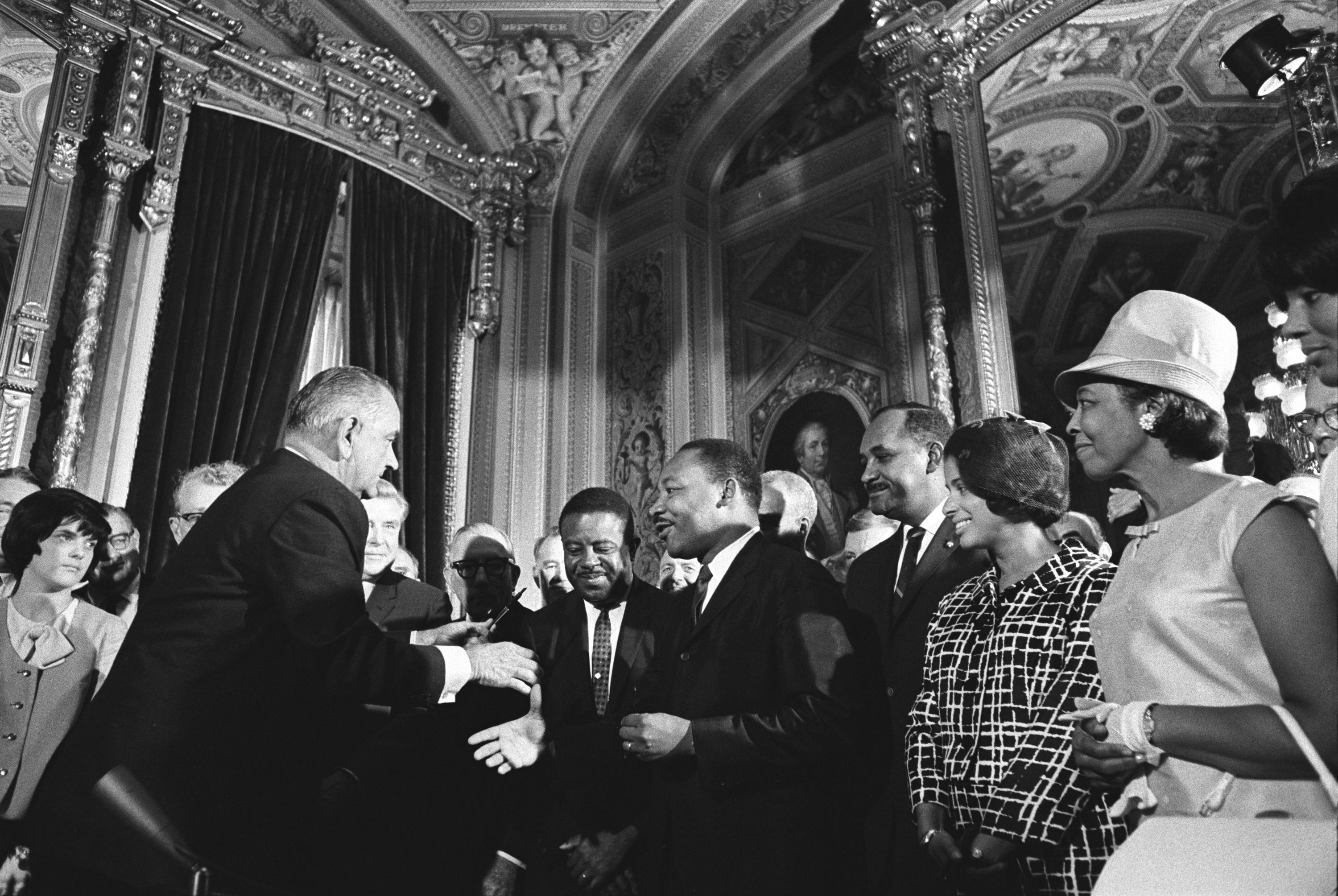 50 years ago this year the highly organized and visible protests against the ongoing oppression and violence that had kept voter registration of Blacks in Selma at 2% (300 out of 15,000 eligible voters) culminated in the march that started in Selma, Alabama and ended at the capital in Montgomery. The highly publicized march led ultimately to new remedial legislation and progress, highlighting the effectiveness of high profile actions in service of social change.

There were already Constitutional protections in place for voting rights, but in 1965 dramatic change was needed. The following three amendments to the Constitution that were passed immediately after the end of the Civil War promised full rights to all adult male citizens of the United States:

Amendment XIII, Ratified December 6, 1865
Section 1. Neither slavery nor involuntary servitude, except as a punishment for crime whereof
the party shall have been duly convicted, shall exist within the United States, or any place
subject to their jurisdiction.
Section 2. Congress shall have power to enforce this article by appropriate legislation.

Amendment XV, Ratified February 3, 1870
Section 1. The right of citizens of the United States to vote shall not be denied or abridged by the United States or by any State on account of race, color, or previous condition of servitude.
Section 2. The Congress shall have the power to enforce this article by appropriate legislation.

But rights afforded by the US Constitution were ignored or circumvented in many of the states where overt racism and the legacy of slavery were (and still are) the most acute. The federal government had passed the Civil Rights Act of 1964, which established a precedent for ending discrimination, but had not specifically targeted the issues of voting rights in the Deep South.

Despite the existing legislative equity the reality was entirely different, and as the ideals of Reconstruction faded even further from the goals of men in power, the set of segregation laws commonly referred to as “Jim Crow” had codified racial discrimination into law in the late 19th and early 20th centuries. While Blacks technically had the right to vote, as laid out in the 15th Amendment, poll taxes, unjust regulations, and the brutality and violence imposed by white obstructionists, effectively kept black Americans in several Southern states disenfranchised.

In the mid-1960s Selma, Alabama emerged as the National focal point of the fight for voting rights, partly as a result of Dr. Martin Luther King’s decision to participate directly in the actions there, but largely due to the foundational work by the Dallas County Voters League (DCVL), the Southern Christian Leadership Conference (SCLC) and the Student Nonviolent Coordinating Committee (SNCC).

The march galvanized the movement and brought attention to what was happening throughout the South. As a result, in 1965 Congress passed the “Voting Rights Act,” with the intention of insuring that every American be able to vote unhindered, and with special Federal oversight of the southern states which had been guilty of the worst violations of voting rights. This led to decades of surges in voter registration of Blacks in the South, and had the additional impact of growth in the number of Blacks elected to office.

Tonight at the Rainier Valley Cultural Center, the next installation in the Dismantling Racism Series (co-hosted by Rainer Valley Historical Society, SEED, and this publication) will consist of a showing of the documentary, “Selma: The Bridge to the Ballot,” followed by a community discussion about voting rights and responsibilities. The film screening is made possible through an arrangement with the Southern Poverty Law Center. From the SPLC’s website:

“The film also aims to inspire voter and civic engagement. In the 2012 presidential election, only about six in 10 eligible citizens exercised their right to vote – meaning approximately 90 million voters did not cast ballots. Turnout dropped to a 72-year low in 2014.

“We believe our film will inspire millions of young people to vote and to take action to help make their communities and our country stronger,” Cohen said. “It’s a crucial reminder that each of us has the ability to bring about powerful social change.”

In 2013 the Supreme Court voted to repeal the Voting Rights Act, ruling that the restrictions imposed on the Southern states were no longer necessary to maintain equitable access to the ballot. It has not been long enough to see the impact of the change, but it seems unlikely that the court’s majority opinion will play out as ideal for insuring voter participation.

Fittingly, today is established by the United Nations as  “Human Rights Day,” an opportunity to reflect on the history of civil rights in this country, and to look to the future for continuing the work, no less necessary today than it was in the ‘60s. While today there is explicit and legislative equity, clearly there are still great racially-based disparities in opportunity and advantage. These inequities – while an integral part of the fabric of daily lived experience for Black Americans in this country – are more difficult to prove in a way that is unquestionably accepted by White America. And while the pull to cynicism is strong, it is essential for every adult American to participate in the system through the election process. The vote is only one means through which change can be affected, but dismissing those rights and responsibilities cedes power to the same people who have traditionally held it in this country, which will not lead to greater equity or liberation.