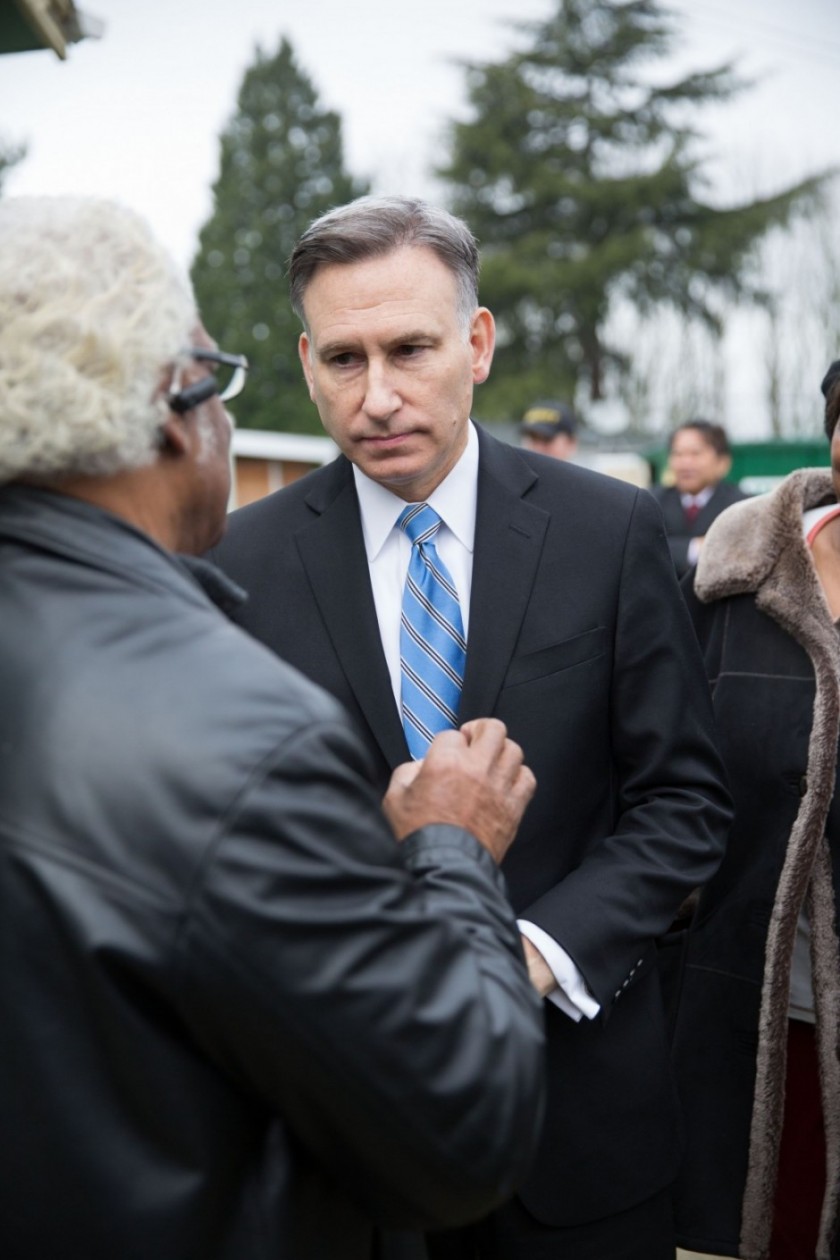 words and photos by Alex Garland

A tiny community center conference room was packed to the brim Tuesday morning to hear Dow Constantine provide remarks on the removal and clean-up of West Hill’s man-made mountain. It’s known by West Hill residents as “Mt. Anderson,” and it has been the source of suffering for nearby residents for over 30 years.

Mt. Anderson, officially known as Contractor’s Concrete Recycling — and the company, owned by Joseph Anderson, does just that. It’s located just a few hundred yards to the south of the Empire View Mobile Home Park and directly across the street from the Skyway Mobile Home Park in the unincorporated area of King County known as “West Hill”. The mountain itself is an enormous pile of rubble, parts of it topping 20 feet high. For more than three decades, residents of these mobile home parks have complained of silica dust from the concrete crushing, covering their homes, their cars, and causing health issues.

King County Executive Dow Constantine told the packed room, “This is a day we can say that no more concrete chunks will be heaped on to the pile of debris known as Mount Anderson.” He announced that the county is going to reclaim this site for the people of Skyway and West Hill, leading to cheers from nearby residents in the room.

He added, “Today I’m pleased to say that King County has a court order in hand that halts any further debris from being dumped here and funds a speedier cleanup of this eye sore and health hazard.”

Constantine then thanked the King County Council for approving an advance of $400,000 for cleanup, which will go to the financial manager of CCR, known as the “receiver.”

This receiver will hire a contractor to crush the concrete debris of Mt. Anderson and spread the grindings as dirt throughout the site. The funds will be reimbursed to the public from the sale of this property.

“I want to be clear about expectations. Mt. Anderson was not built in a day and is not going to disappear overnight…This is certainly not going to be a green field, but the dust and the eyesore will be gone… Six years was too long to wait to get this done, 33 years was ridiculous.” said Constantine.

The executive then introduced Bill Bowden, president of the West Hill Community Association (WHCA) who Constantine says have been “birddogging this case for years”. The 25-year-old organization has been instrumental in keeping the community informed about the issue over the last few decades, in amplifying local concerns and in bringing a consistent community presence to keep up the pressure and bring accountability to each court hearing. Bill Bowden recognized that this “represents culmination of a decades- long effort to either have the operation run in a compliant manner or to shut down and go away.”. “I’m happy to note that this begins an effort by King County to modify it’s code enforcement.

“We must not leave the residents behind as they know what’s best for this community.” said Kranzler.

“As we move forward with revitalization efforts we want to make sure we maximize community benefit agreements and that the residents currently living here are benefactors of all the investments that come from this.”

When asked about the timeline for Mt. Anderson’s removal, Constantine said it could be a matter of months or even as long as a year.

“People are entitled to do business but they’re not entitled to harm others, harm neighbors, or harm the environment.” said Constantine.
“We have to be very clear about that, we have to have clear enforcement and I intent to rewrite those rules to ensure that.”

“The dust is actually unbelievable coming from this operation. It’s all silica” stated WHCA President Bowden. Crystalline silica dust is classified as a carcinogen and can cause irreparable harm to human lungs, a fact alluded to by WHCA board member Curtis Faulks who reminded the Executive during the press conference that “there are kids in this neighborhood and there are four families that lost their loved ones because of this, and we’re tired of it.”

After the brief press conference, John Starbard, Director of the Department of Permitting and Environmental Review was asked about the backlog of over 700 cases of code violation. With approximately 200 new cases per year and a big backlog, the question of a lack of personnel is raised. An understaffed office of code enforces was suggested to be one of the many variables as to why CCR was able to stay in operation over decades despite repeat complaints, concerns, and code infractions. Starbard responded by explaining the complex process King County has for hiring people for code enforcement positions.

“We would welcome more code enforcement staff however that function is funded by the general fund. That is always one of the more constrained funds of any government and at King County. There are many pressures and requests for general fund dollars and honestly, I’m not optimistic that we’ll get increased funding. But we need to find a better way to do our job and get rid of a backlog, such as Mt. Anderson,” said Starbard.

“Sometimes it does take a long time,” said Starbard.

An early draft of this article was erroneously published on 12/16/15. This updated version published as of  10:05am on 12/17/15 presents the article as it was originally intended to appear.