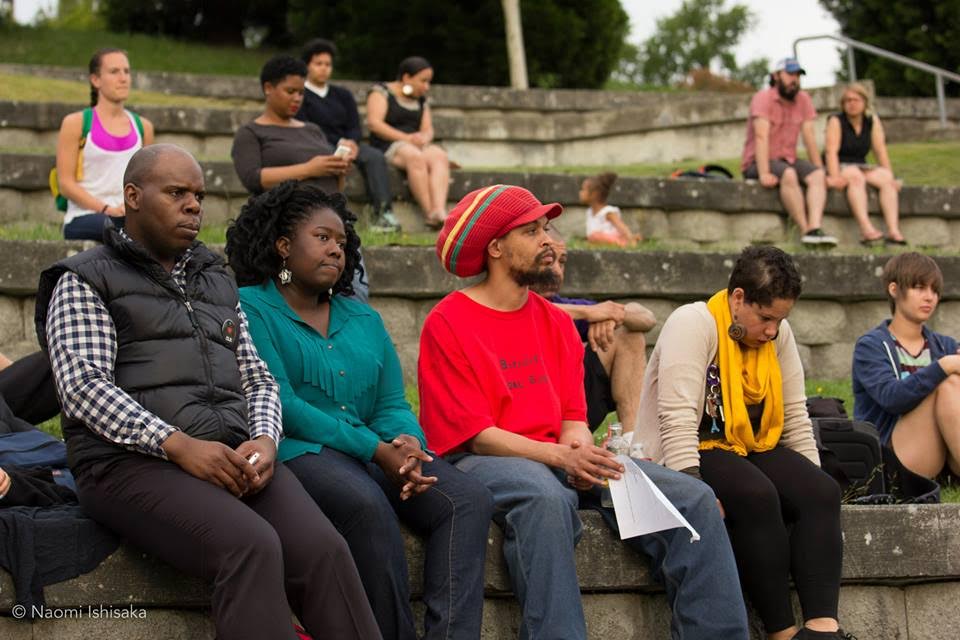 Congratulations! If you are reading this, then you and I made it through another year. But everyone didn’t.  I plan to start the year 2016 with a splash of Hennessy and moment of silence for the ones who aren’t here…

On May 13th, my son Mumia Biko Vassar-Williams began his 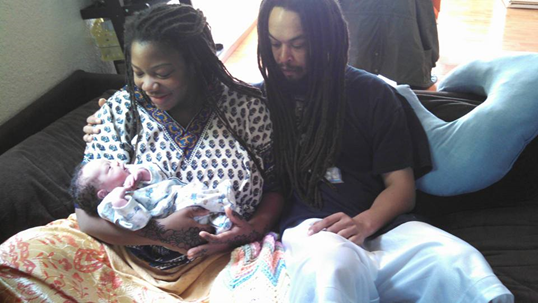 journey.  We named him after Black Panther and revolutionary journalist Mumia Abu Jamal.  Ironically, little Mumia Biko arrived 2 weeks early, on the 30th anniversary of the day when Philadelphia Police Department dropped a bomb on the headquarters of a grass roots organization focused on creating community-led alternatives called MOVE.  Mumia Abu Jamal was not a member but covered the bombing and wrote extensively before and after about how MOVE members were working together to create a more just and equitable world.

This was my second biological child.  I’m also proud father of a brilliant and beautiful 15-year-old girl in San Antonio, Texas named Kylett.  When my first child was born I was 18 compared to the 33 I am now for my second.  Life has slowed down a lot.  People tell me I’ve matured.  This time around, it seems like I cherish the little things with more clarity.  I can just close my eyes to replay Mumia’s first kicks or cries.  I have mental tattoos of his first wobbly crawl and pull-up attempts. A sense of love and responsibility to my children’s generation gives foundation and provides context for much of the work I do in the community and my connection to young people.

I didn’t anticipate how much I would appreciate the little things like holding his mother’s hand as little Mumia came into the world.  I remember how the umbilical cord had a loose knot before it was cut and that his skin had a blue and purple tint before the oxygen really started flowing through his veins.  I remember that my little brother had witnessed the birth of a daughter just a few weeks before (we sort of compared notes about what we both had seen).  I understand that I will never be able to properly thank all the community and loved ones who visited after the birth, made donations, cooked food, or sent gifts.  Those times are some of my warmest memories.  I’m not exactly sure what making it through would have looked like for us without that support.

Taking a step back and looking at how things have been going for the larger us, 2015 was not a safe year for black folks to be interacting with law enforcement.  According to killedbypolice.net, 1190 men and women had been killed by police as of December 29th of this year.  Most were poor and black. Many of their names are remembered and spoken only by close friends and family.  The reason so many have even acknowledged this horrible epidemic is because of tremendous community organizing and the fact that a small percentage of those executions were captured on cell phone video and broadcast around the world.

Baltimore stood up in a big way last April to protest the torture, murder, and cover up of 25-year-old Freddie Gray.  After 3 weeks of unrest, indictments were finally handed down against six cops who were involved in Gray’s torture and death.  In that way, many were reminded that protesting really can work (when organizing is led by the most affected communities, a diversity of tactics are employed, and action is sustained over long periods of time).  And as the year comes to a close, an uprising in Chicago continues.  Sparked by the murder and cover up of 16-year-old black boy by a skin head looking white cop.  Details of the shooting had been suppressed and misconstrued until a freelance reporter got hold of a surveillance tape.  Obtained through an unrelated public records requests, footage showed the cop killing the black teen in cold blood.  Mass protest and civil disobedience followed and have been led by black men and women in the city from communities that are most affected by poverty, despair, and over-policing.  So far, two high ranking police officials have been forced to step down.  The stated goals of the unrest have been to end the culture of corruption in all branches of Chicago Government. 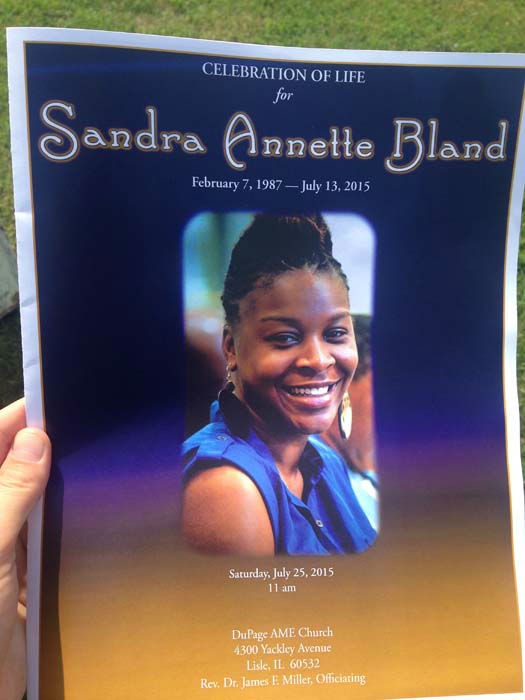 Sandra Bland was a 28-year-old black woman who was found hanging while in the custody of the Prairie View Police Department.  The way things played out for her hit especially close to home for me.  Her profiling, unlawful arrest, and subsequent murder took me on a few trips down memory lane.  In 2007, I had a somewhat similar experience and was wrongfully arrested by an irate and unnecessarily aggressive police officer in the tiny town of Harahan, Louisiana.  When the law man arrested me that night, he bragged that he was just “going to make up a bunch of lies for the police report”.  One difference between my situation and what happened to Sandra is that there were witnesses in the car when my stop was made.  For that reason, word got back to friends who immediately started calling the jail, the police department, criminal justice focused non-profits, and anyone else they thought might be able to help.  I want to stress that my folks were looking for me, making calls, even borrowing money to bail me out almost immediately.  That is how we have to look out for each other when one falls into the clutches of these racist police departments.  How that minor traffic strop ended up for Sandra Bland exploded like a landmine, especially close to home for me.

My Great Uncle Henry used to tell me people come into our lives for, “Reasons, Seasons, or Lifetimes.”

I was reminded of those wise words several times throughout the year.  In 2015, I began some great friendships, but ended some too.

I was chair of the MLK March and Rally, last year, and survived some intense and interesting moments in the planning meetings leading up to the march.  We made a few changes to it in 2015. For example, the march paused at several locations: a construction site at Yesler Terrace, the current Youth Detention Center, the King County Jail, and Seattle Police Department. This allowed present day crusaders for justice to preach and teach about a few of the campaigns Dr. King would be supporting if he were still here.

When January 19th arrived, it was the biggest celebration of Dr. King’s birthday that Seattle had seen in many years.  Over 10,000 people came out; the vast majority of the crowd was under 25.  That afternoon, there were several non-violent acts of civil disobedience around town to bring attention to disproportionalities throughout the criminal justice system and abusive policing of black and brown communities.  Those actions resulted in over twenty arrests.  Old timers tell me the city has not seen marches like that since the 60’s.  I believe we captured the spirit of how and why Dr. Martin Luther King Jr. truly did his work more honestly than is often seen.  The keynote speaker for the pre-march rally was Jelani Brown, a young organizer and activist from St. Louis who helped get things started in Ferguson, MO.

In many ways, the No New Youth Jail movement has grown and flourished over the years.  I am just proud to have been part of it.  Now, in EPIC meetings the work is talked about as the “People’s Plan” and has branches which focus on economic justice, building political power, nurturing community led alternatives to detention, and stopping construction of a new youth jail.  There are countless young anti-racist, and unapologetic organizers doing this powerful work in our communities.  In 2015, anti-racist organizers from Ending Prison Industrial Complex and community leaders from Rainier Beach Action Coalition came together to start an effort called Rainier Beach Restorative Justice Project.  In 2015, RBRJ hosted a Restorative Justice Town Hall, three Introductory Peace Circle Trainings, sat on a panel with Restorative Justice Oakland’s Youth, and convened a conversation at Rainier Beach High School between administration, teachers, and community to talk about the best ways to implement restorative practices in the lives of our South End children. My chest puffs just a little bit when thinking about the time and energy everyone has put in.  I am amazed when I try to think about how many people this No New Youth Jail movement has really touched and inspired.

I’ve reached a point in my life where I try to appreciate the downs as much as the ups.  Looking back, I seem to have collected more lessons from my life’s losses than wins.  Winning brings confidence, but losing builds character.  We need both, in moderation.  Like sunshine and rain.

In 2015, I began working at both the Rainier Beach Community Center and Rainier Beach High School.  In both spaces, there is a lot of excitement and positive energy around the organizing led by students at Rainier Beach that resulted in the Seattle City Council putting aside a million dollars to eliminate the 2.5 mile walk zone many students had to travel, and subsidize free ORCA Cards for all SPS students who qualify for free lunch.  I too have been inspired and motivated by this organizing.  Moving ahead, I look forward to exploring how community and City Council representatives can support the youth who are interested in tracking those funds and making sure the entire one million is actually spent on free ORCA cards for high school students.

In 2016, I expect community to breathe life into that Zero Juvenile Detention Resolution that Seattle City Council adopted unanimously last September.  Any day now, I expect conversations to start in the halls of County Council about how to create an exit plan from that misguided waste of $210 million tax payer dollars spent on a new youth jail.  By the year’s end, I predict the County Executive will have implemented an action plan to slowly back away from the political ledge his quest to spend all that money on a Youth Jail has become.

James Akbar Williams is a South Seattle based Educator, Community Organizer, and Journalist. He writes a regular column for the Emerald.