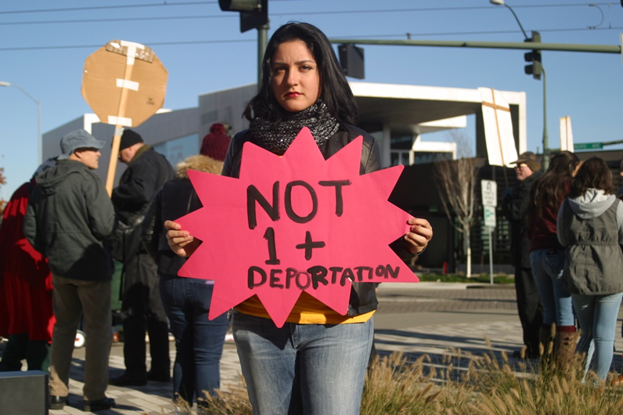 The detainees, incarcerated in Krome Service Processing Center, have a part of an ongoing hunger strike since December 2nd.

Judge Altogoaga authorized medical staff to restrain and force-feed the detainees through nasal-gastric tubes if it becomes necessary to save their lives, however, Krome’s staff doctor, Dalian Caraballo, testified that the men are not in any immediate danger.

Descriptions of placing strike participants in solitary confinement, employing sleep deprivation tactics, increasing deportations, and cutting off lines of communication are coming from detainees, according to the anti-deportation collaboration #Not1More

“Once again the system is complicit in torturing detainees by keeping people in prisons allow profit and xenophobia to be the incentives, also using solitary confinement and force feeding as retaliation to end their peaceful protest and deter new protests from even starting,” says Latino Advocacy CEO and community organizer Maru Mora Villalpando.

“ICE issued a statement saying that the agency does not retaliate in any way against strike participants. The agency said that it does monitor the food and water intake of hunger strikers for the sake of their health,” according to the AP.

Activists, community members and immigrant-born communities all over America calling out for justice. Strikes, rallies, and marches are continuing to be held in protest of ICE detention centers and deportation policies around the US.

On November 21st an estimated two hundred participants rallied and marched on the Northwest Detention Center (NWDC) in Tacoma, WA.

The event was held on the one-year anniversary of President Barack Obama’s executive action of Comprehensive Immigration Reform.

Little has changed since that day and many agree that policy makers are not doing enough to change the systems of incarceration and broken families. Villalpando explained how living in a country where hate speech is allowed, hate crimes are allowed, and allowing people in detention centers to be tortured breeds an atmosphere of fear and hate.

The day began with rally near the Downtown UW Tacoma campus. Northwest Detention Center Resistance (NWDCR) unified community members to improve detention center conditions and called for an end to all deportations.

69-year-old Tacoma resident, Dennis Shaughnessy, marched to express solidarity with the people that are being detained.

“Diversity is an American value and I think it makes our country healthy. Now there’s such a movement for exclusion which is not a value our country should have,” he said.

Community member Monica Mendoza Castrejon, 21, stands for fair and just immigration reform. She has family who came to this country as immigrants, but believes we are all immigrants in this country.

Castrejon says, “I don’t believe any human being is illegal, it’s just migration. This immigration system is unjust and people need to wake up and see what is occurring.”

The march was led through Downtown Tacoma and stopped at mural painted by artist David Long. The mural highlights the injustice of incarcerating human beings for profit.

Long, 26, showed up to support the rally and speak about the mural. He spoke of America’s white supremacist history, putting white people at the center and everyone else as subject to their decisions and their values.

“This is a really current and very local issue that I wanted to give visibility to. I wanted to amplify the voice of the people who are organizing from the inside and from outside,” Long said.

The marched ended with a rally held at the gates of the NWDC. Privately owned and operated by GEO Group, a real estate investment trust, the prison is the largest of it’s kind on the west coast. It’s able to house up to 1575 immigrants while at maximum capacity. The detention center is operated under contract with ICE.

3 hunger strikes have occurred behind these walls, dating back to February 24th, 2014.

The largest occurred on March 7, 2014 when approximately 1200 detainees refused meals.

The strike lasted for 56 days. Strikers demands included improved treatment by guards, affordable and consistent bond amounts, and to end the GEO Group contract for NWDC.

Families of detainees are usually the ultimate victims. They are systematically ripped apart from their loved ones and left without definite answers of a return.

Jenett Luevanos, 33, of Tri Cities spoke to me outside the detention center. She explained how her father, Amador L. 57, Colima, Mexico was arrested on June 4th without committing a criminal act and is currently incarcerated and awaiting trial.

He did not commit a crime. We don’t know exactly how he was found out, but he was, and this happens everyday, she said.

Luevanos expressed feelings of helplessness and powerless over a system designed to separate their family by asking, “How would you feel if your family was broken up? If somebody was just ripped away from you for no good reason?”

She described her father as a good man, the bread winner to the family, and a staple in supporting their disabled mother.

The emotional impact of his capture could be heard in her voice as she spoke of the family’s current struggles to maintain their lives without him.

“It’s been tough trying to take care of my mom by ourselves. He’s

always been the driving force of our family. He’s always been our number one to come to for advice on anything. If you met this man you would understand.”

However, the family remains strongly optimistic that he will be returned to them free of harm.

“The number one thing keeping him that’s keeping him fighting, that’s giving him patience, is his faith and how strong our family is,” she said.

Washington is now home to an estimated 920,694 foreign-born inhabitants, according to the U.S. Census Bureau. That accounts for nearly 6.6% of Washington’s total population and that number is rapidly increasing.

With a rapidly increasing size of immigrant communities, activist Ramon Torres of Bellingham believes multi-race cohesion is the one answer to the division.

“The primary reason that unites us is the fact that we are all taxpayers and part of that money is coming here (to NWDC), to something that keeps dividing White and Brown people,” he said, “there shouldn’t be racism among us, we should give each other a hand whether we are White, Black, or Mexican.”