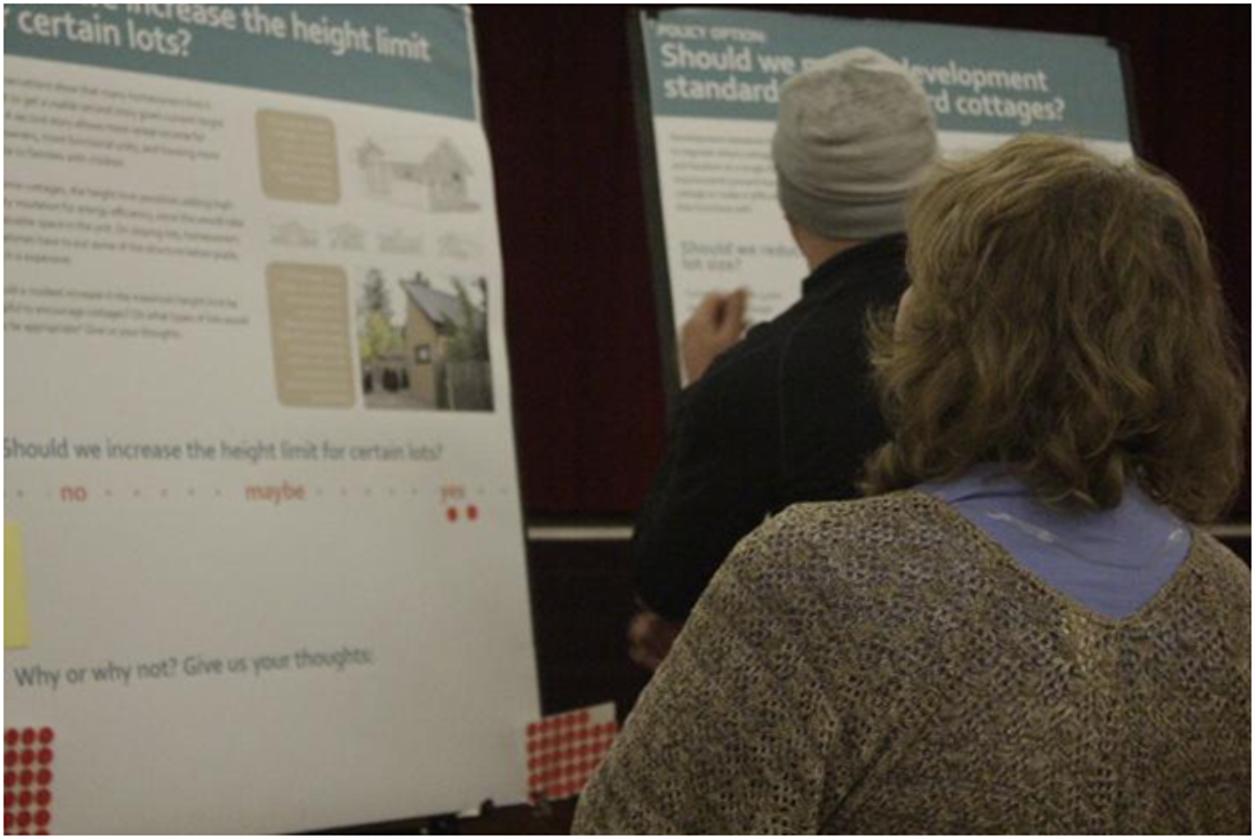 Since 2010, single-family homes in residential neighborhoods have been allowed to build backyard cottages. However, only 200 of the approximate 75,000 eligible single-family homes have opted to build backyard cottages according to an October 2015 report from OPCD. Many believe this low number is due to over-regulation, unnecessary costs, and complicated permitting processes.

In 2014, the City Council approved Resolution 31547, encouraging the Seattle Department of Construction and Inspections (DPD) to ease the permitting and regulatory processes for homeowner looking to build backyard cottages.

One issue homeowners face is the concern over off-street parking.

Currently, most homeowners are required to build an additional off-street parking space when building a backyard cottage. This adds significant costs to projects, making backyard cottages financially impractical for many homeowners.

Community members attending the meeting claimed that building a parking space could cost upwards of $120,000.

“I don’t have a car, so parking for me is not an issue. So many people don’t have a car, and it wouldn’t matter if there is [off-street parking] or not,” said Pauline Van Senus, a renter who is interested to know more about backyard cottages because she thinks she might benefit from it in the future.

Others at the meeting were concerned that removing the off-street parking requirement would create a parking shortage. However, OPCD presented information from a Portland, Oregon survey found that secondary units, called accessory dwelling units (ADUs), did not limit on-street parking. The study claims that two-thirds of ADUs tenants either do not have cars or the homeowners provided off-street parking by choice.

The OPCD needs to further discuss the impacts of removing off-street parking requirement with the public because different people have different concerns.

“I generally think that the single-family homeowners are the most defensive of their street space and they want to protect it. And I think that people who are more accustomed to an urban lifestyle, living in an apartment or taking public transportation are a little more flexible with parking environments,” said Sarah Marshall, a homeowner who is thinking of building a backyard cottage.

It is unclear, however, if Seattle would experience similar results. The OPCC needs to confirm the reliability of the survey to make sure that it has the same or similar results in Seattle.

According to the DPD report, backyard cottages are limited to a 800 square footage limit, including any garage and storage areas. Additionally, the units are restricted to an approximate 16-foot height requirement, depending on the slope of the roof. For many, this is simply too small of a living area.

The square footage and height limitations for backyard cottages have reduced the design flexibility and caused many homeowners to rethink their construction.

Eric Shalit, a graphic designer living in West Seattle, is planning to build a backyard cottage. He said that the 800 square footage limit is his main concern because it is too small for two people, especially for American lifestyle and housing design.

“I have heard folks [saying] that ‘if you just allow one or two feet higher, we will have a much better living space on the second floor,’” said O’Brien, only expecting a modest increase on the height limit for backyard cottages.

Another community meeting is scheduled for Feb. 3 at 6 p.m. at Wallingford Community Senior Center. Additional information about the upcoming meeting is on the Office of Planning and Community Development website.