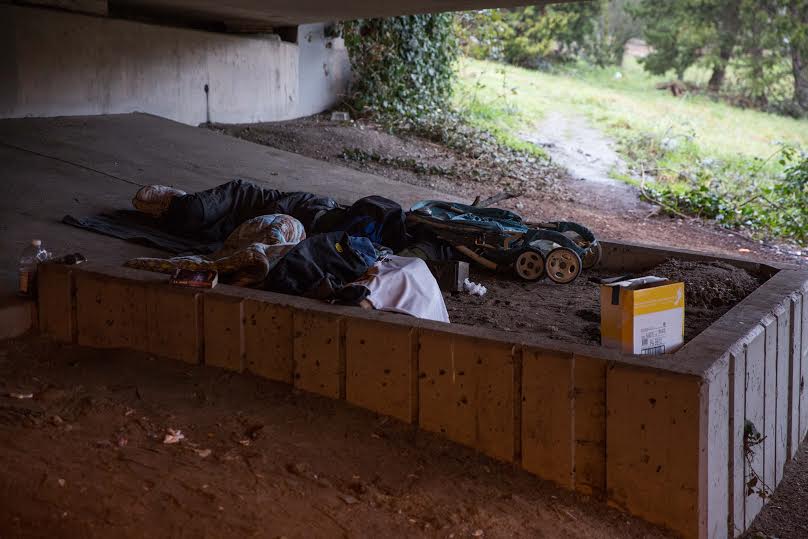 On the evening of January 26, three homeless teens killed two people and wounded three more. The shooting took place in The Jungle, a homeless encampment that stretches on the west side of Beacon Hill, in the greenbelt and under I-5. Their mother was also homeless, and their father in prison. They had been placed in the foster care system, which had failed to find them places to live that they were willing to stay. The news of the shooting interrupted a press conference that the mayor was giving about homelessness, in which he complained that homeless advocates are expecting too much from the city.

Very early in the morning on January 29, hundreds of volunteers fanned out across King County for the One Night Count, counting the number of homeless people sleeping outside after the shelters are full. 4,505 people were counted, a 19% increase over last year. The count did not include The Jungle. “Following recommendations from the Seattle Police department in the wake of Tuesday night’s shooting in a greenbelt near I-5 in Seattle, organizers adjusted six count areas to exclude places under the freeway and in adjacent greenbelts where teams usually count. It is impossible to know how the total might have been different had it been feasible to count in those areas, which have typically included many people.”

I have been working with people suffering from homelessness for 15 years now in King County. The number of homeless people has increased nearly every year. I’ve been doing it so long that most of the people who were doing it when I started have quit, and I’ve gotten used to how the new people who replace them inevitably make all the same mistakes I did when I started.

One of those mistakes was believing that if the people with wealth and power were able to see the intensity and scope of the suffering they were causing, they would voluntarily act to stop that suffering. I no longer believe that.

Last weekend a friend gave me a tour of all three Nickelsville communities — there is one on Dearborn near the big Goodwill, one in the Central District at 22nd and Union, and one in Ballard. Dearborn and Ballard are a mixture of tents and tiny houses, and the one at 22nd and Union is all tiny houses. Each camp has portable toilets, trash removal, security, and a perimeter fence. All the residents I met are beautiful humans: kind and articulate and thoughtful and responsible. We talked about the shootings, which happened not far from the Dearborn camp. We talked about how most people are peaceful and decent but a few people are scary and dangerous, and how this is true in every walk of life, but people who sleep outside have less defenses against these dangers. We talked about how scared they were that they might lose what tiny sliver of safety they had, like being able to sleep in a camp with a fence and no guns instead of in the jungle. We talked about how everyone deserves a safe place to sleep: this is a universal human right. Yet in one of the wealthiest counties in the world, we are failing to meet this need for thousands of people, most of whom are good people, many of whom are children.

We can do better.

We can end homelessness, but not without making big changes to the way we do business. Washington State needs tax reform; King County needs rent control and low income housing. Homelessness is just the tip of the iceberg, and the iceberg is poverty and income inequality and greed at the top. In order to end homelessness, the couple with the 18 bedroom mansion and two empty vacation homes and a yacht are going to have to settle for a smaller yacht. That’ is not going to happen voluntarily; it’s going to happen with a lot of kicking and screaming and ugliness. Or it is not going to happen at all. Because greed is a terrible sickness and the people who suffer from it will need help to return to their natural goodness.

Polly Trout is the founder of Patacara Community Services, a faith based community group cultivating Engaged Buddhism, social justice, service, kindness, generosity, and compassion in Seattle, Washington. She has a doctorate degree in religious studies from Boston University.

Note: An earlier version of this article incorrectly described the victims of the shooting as homeless. It has since been updated.