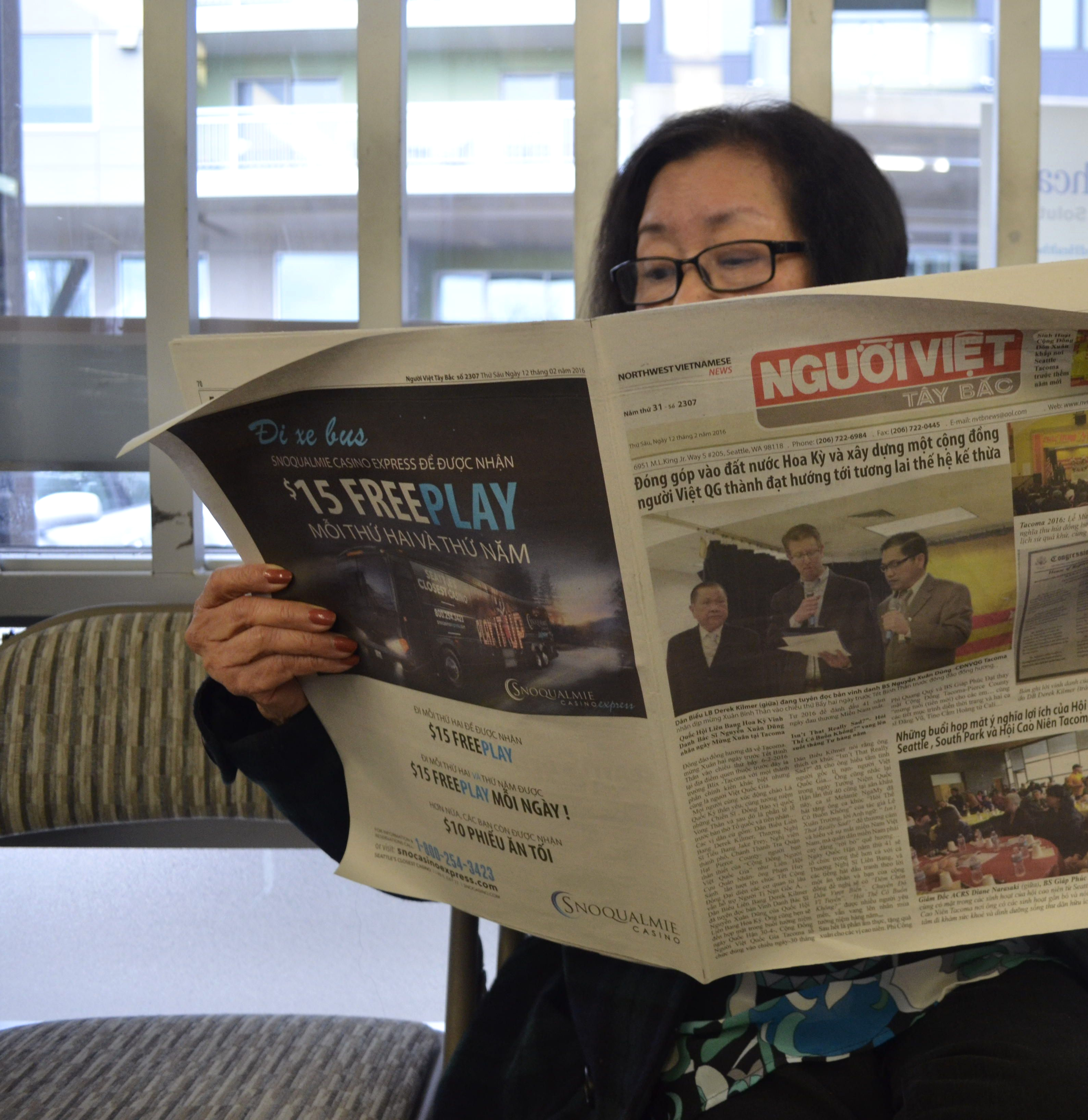 There’s a small office situated in a plaza near Othello Station, surrounded by Vietnamese businesses and shops. Fitting, as this particular building houses Nguoi Viet Tay Bac, one of the oldest Vietnamese-language newspapers in the NW. Julie Pham, who works with her father and the paper’s founder Kim Pham as managing editor, sits comfortably on a chair in the main lobby, surrounded by immense, multicolored stacks of papers that find their way into the hands of 80,000 readers annually.

Since fleeing Vietnam as boat people, the Phams have created a dedicated source of coverage, capturing the readership of many Seattle-based Vietnamese-Americans, from arriving immigrants to established entrepreneurs. Julie Pham is a first-generation Vietnamese-American who emigrated in the 1980s with her parents and whose educational history includes studies at Berkeley, Cambridge, and overseas research in Vietnam. Although she still co-owns the newspaper with her family, she spends her days heading marketing and community engagement at Washington Technology Industry Association (WTIA).

“This is really before desktop publishing,” said Julie. “We actually had these big plastic sheets that you would roll the articles on. Then you would take it to the printer, where they would photograph it, and from there they would print it. Growing up I remember helping my family that way… When I was younger it felt fun, like I’m cutting and pasting.”

The newspaper opened on an empty lot currently occupied by a church, near the Franklin high school area, as immigrants started settling in after the Vietnam War. It then has moved alongside the community’s business holdings, moving from its former Rainier Vista neighborhood to its current Othello placing in 2001. “Nguoi Viet Tay Bac was actually one of the first private newspapers, so it didn’t run on grants, it ran on advertising,” said Julie. “There were enough Vietnamese businesses here in ‘86 for it to start up.”

Since then, Nguoi Viet Tay Bac has had a significant presence in the NW Vietnamese community. Most patrons pick up a copy during a meal at a restaurant or going about their errands: “The paper is everywhere. It’s in the doctor’s office, it’s in the restaurants, and I think it’s important that people see a lot of it and get informed about local news about us,” said Danh Le, an avid reader and a senior member of the community. The newspaper has also reached several milestones, such as celebrating its 2000th issue in 2011, as well as formally launching a TV broadcast format on Saigon Broadcasting Television Network, and its online version. Many members of the Viet-American community see the publication as a long-standing important cornerstone. “It has a strong community value because it’s lasted a long time, it helps to spotlight businesses, and Kim has done a good job of establishing relationships and connections to the community.” said Le.

Currently, its largest demographic consists of senior citizens, such as Le who is 75, as well as its established reading group of immigrants and Vietnamese-Americans with limited English proficiency. Julie describes that community as being united and strengthened by the newspaper, especially on specific issues: “The Vietnamese community has always been big since it got here… one of the things Vietnamese started to mobilize around was that we were very against Sound Transit and light rail, because it disrupted a lot of businesses.” Prevalent issues around the local community include contention around streetcar construction and anti-communist protests against Vietnamese statesmen and government officials who visit the Seattle area. To that end, Nguoi Viet Tay Bac has historically taken a specific politically conservative stance, embedded in a community full of South Vietnamese war veterans.

Many Viet-Americans also see the newspaper as a source of legitimacy and recognition for upcoming Viet artists and young people in the community, as well as celebrating events: “We take a lot of pride in having articles about young people, it’s a way to show their parents what they’re doing,” said Julie. ”When I first started out I saw this article on a Vietnamese-American rapper, Andrew Le. He felt so much pride because his story was in Nguoi Viet Tay Bac, and his parents could see what he was working on.”

Large community gatherings such as Tet (the Vietnamese lunar new year), openings of new businesses and schools, and cultural and religious occasions are often covered. “I think he likes to elevate the conversation,” said Julie, regarding her father’s approach on articles, “and he’s personally passionate about culture as the Vietnamese have a rich tradition of singing, literature, and art.”

Some of the most notable events in the community, according to Kim Pham, are the City of Seattle formally recognizing the three-striped flag of the South Vietnamese government, and the growth of Buddhist temples in the city. “We aim to mostly cover positive or important stuff that the mainstream media doesn’t really notice,” Pham says.

Pham has also seen the technological side of the publication improve since coming back to Seattle and working on the publication. The newspaper has undergone many graphical changes since moving locations in 2001, especially concerning advertising and photos. “In 2007, when I moved back, I helped the newspaper change from that kind of camera work to PDF. We also revamped our website.” said Julie.

Since opening in 1986, Kim Pham has served as the newspaper’s head. A generation later, the newspaper can boast that it has never missed an issue in its weekly run. “My father’s going to work there until he physically can’t anymore,” said Julie. “In serving community, that’s the source of his passion, things will obviously change, but this is what keeps him healthy.”

In keeping with that philosophy, Nguoi Viet Tay Bac aims to remain an important ethnic media source in Seattle, but anticipates facing challenges in the coming future. “As the older community ages out, it’s going to be harder,” said Julie. The growth of Vietnamese-language schools has accelerated, but the lack of native language retention among Viet youth is concerning to many members of the community. “I think that there is a desire among younger Viet-Americans to preserve their heritage but a lot of them don’t choose to read Vietnamese,” said Julie. “So in terms of our ability to serve that population, it’s difficult because we’re not bilingual.”

As the community continues to grow, the family aims for the newspaper to continue strongly, but is concerned about who will head the publication. “My dad really wants to keep the newspaper in the family, I think you see that with a lot of family businesses,” said Julie. “I’m bilingual but I’m not capable of publishing a newspaper on my own.”

Julie’s working commitments are mainly to the WTIA, but she still strongly supports her family in running this more than two-decades-old publication, faithfully serving its mission to cover the Vietnamese people in the northwest. The growth of the newspaper and the community make that original commitment extremely unlikely to diminish in any way. “I would like us to have a sense of what’s next, what’s for the future, such as in terms of technological progress” said Julie.

“I want us mostly to have a hard conversation about the next step, about who will lead the newspaper… but our goal of serving our community isn’t going to change”.

Editor’s note: A previous version of this article has been updated to correct Julie Pham’s involvement with the newspaper and the development of their website and new hires. Andrew Le’s name has also been corrected.