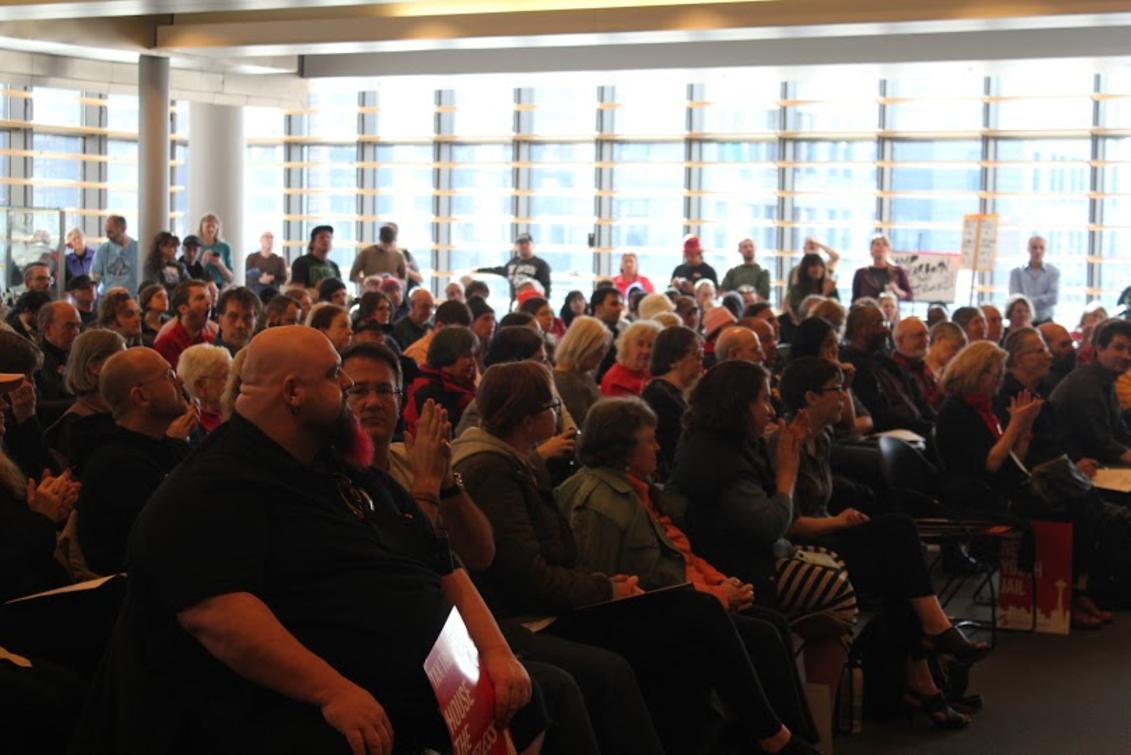 Billed as “The People’s Assembly” and convened by Seattle City Councilmember Kshama Sawant, the event started with a panel discussion.

With a question as complicated as how do you end homelessness, there was a range of responses and no clear-cut answers by the end of the day.

The panel featured advocates like Real Change founding director Tim Harris, who received the most positive reaction from the overflowing crowd.

Attendants found him hard not to praise after he routinely demonstrated understanding and expertise of Seattle’s poor and homeless communities. Harris made plain some of the concrete lessons he has learned over the past 20 years through his work at the paper, which reports often about the city’s homeless.

“Poor people’s political activity looks like poor people’s survival activity….that is poor people taking action for themselves in the face of overwhelming system failure,” said Harris, “What they are telling us by being in the Jungle is that the system is failing us. The shelter system isn’t working for us. For us, for our situation this place works. It is centrally located. There is overhead shelter. We are invisible here nobody is bothering us. Just let us try to meet our survival needs because you’re not.

He says that the solution to homelessness is simple, if society is willing to listen and put in the work.

“If there is a genius in organizing poor people it is figuring out what it is possible for people to do and helping them to do it. Listening to homeless people’s voices and meeting them where they’re at,” he added.

“Shelter is not always the best way for people to fit in with each other. Gender segregated spaces do not work for everyone,” said Askini.

Nationally, Seattle has been in the top three of cities with the highest number of hate crimes in the country per capita, with more than 40% of homeless youth identifying as LGBT.

In the crowd there were community members advocating for those who were not represented on the day’s panel.

Linda Soriano, who identifies as a First Nations street minister, was disappointed to have not heard the Native American population referred to or represented in the discussion.

Soriano and her husband have been doing outreach to the homeless community for more than 20 years. She regularly attends block watch and public safety meetings in her International District neighborhood. Bringing up key points she felt the panel missed, she spoke of her own experience of homeless advocacy.

“I have had many friends who have died. My husband and I started a homeless memorial tree in Ballard where there were over 46 homeless deaths. Over the years the tree was vandalized and in May 2015 it was chopped to the ground, pictures torn down and stomped on in the mud,” said Soraino, “But we have different types of homeless people in the streets. There are homeless people who are doing what they can to survive, but street people are the predators and the criminals who prey on the homeless people.”

The panel then broke out into various workshops for the afternoon leaving some who came in search of a concrete answer to the problem of homelessness with more questions than answers and a new understanding for how complex the issue truly is.

Ten million dollars from the city council would be a great start in getting the homeless community much needed resources, but if there is not a clear place to allocate the money before it is granted it may leave the homeless in a worse position than before leaving legislators reluctant to invest more money in the future.

There are several experts in Seattle’s homeless community who have been working in the field long enough to offer invaluable insight as to where to start addressing the problem, but many advocates say that if those people are not listened to or brought into the discussion then the city of Seattle will be left with a burning problem and no foreseeable solution.

One thought on ““People’s Assembly” Ask: Is There Actually a Solution to the Problem of Homelessness?”