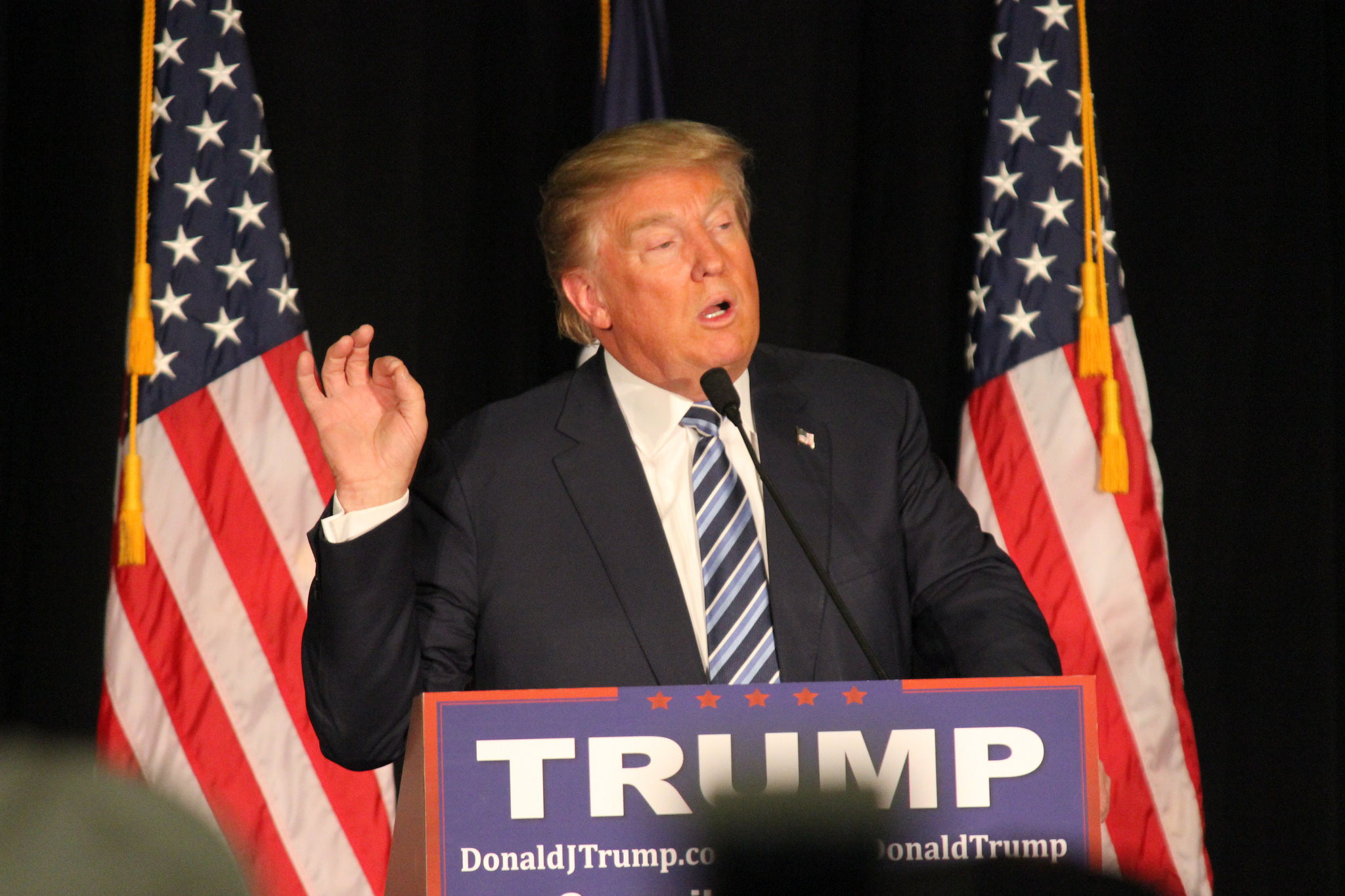 ‘Go send your sons to exile

To serve your captives’ need

To wait in heavy harness

On fluttered folk and wild—

Half devil and half child

Take up the White Man’s burden’

Anger has been touted for Trump’s logic defying political success, underscored by his victories in both the Super Tuesday and Saturday contests. Indications are that, even former Obama voters are now turning to Trump because he, apparently, speaks to their anger.

To the contrary, because this so called anger can be traced to the election of President Barack Hussein Obama, it may in fact be Fear. Fear of success of American Civil Rights: by those who see, in these successes, diminished expectations of their own privileges. Thus, guised as defenders of everything native, these fear mongers are ‘angrily’ planning to take ‘America back.’ From whom, to who or where to seems to be a tumult strategically avoided by tube and main-stream media.

Yet, considering the various political gaffs that have elevated Mr. Trump’s political life, one wonders.   Not only at why someone, who for example voted for Obama—would flip backwards and embrace Trump as the man who speaks to this anger but also at how the racism present in the political lingua passes for political bravado.

Though arguments presented to pry into Obama’s citizenship were guised as legitimate constitutional queries, the flippancy involved is nonetheless conspicuous. At its core lies the question of: how a black ‘foreign born native,’ a ‘Jump Jim Crow’ prospector—cowardly and minstrelsy—infiltrated and dethroned the de-facto gene-rulers?

Obama’s ascendency symbolizes the culmination of America’s Constitutional genius—the principle, ‘We hold these truths to be self-evident, that all men are created equal . . .,’ as it gives context to the politics of Anger/Fear. Obama, this climatic symbol of US constitutional historicity— the story of America’s civil and rights struggles—may in fact be it cursed child. Obama’s paradoxical blessing may as well be Trump’s. He came into office by galvanizing, as it were, angry voters; Trump may as well overrun Obama’s making, as it seems, by use of the same—angry voters.

Yet unlike Mr. Trump President Obama is confronted with his own ontology—his half-ness and otherness. Born to a black Kenyan ‘foreign Muslim’ father and a ‘native’ Caucasian American atheist mother, his identity obstructs his claims: to religion and region—or rather to Christianity and America.

Presenting us with the dilemma of meshing the foreign with the native—the black with the white, the Islamic with the atheist. All made possible, according President Obama, only in the American context. The American context being the constitutional narrative context: the medium upon which American political battles of slavery, anti-slavery, citizenship and rights are staged. Meanwhile, making his persona easy a target by those positioned as the ‘true natives’ and street sentinels of the American constitutional narrative.

At the center of this: foreign is bad and native is patriotic simplistic political opportunism lies a ruffianism that must be resisted. For according to Micheal Neocosmos, this is the very reason why post-apartheid South Africa is a basket of racial unrest. The absurdity of the ‘foreigner native and native foreigner,’ he observes, lies in ‘state politics’: which defines labor strategically by use of politics of exclusion. The foreign native—is that similar/familiar ‘other’ who is viewed by the ‘native’ as the unjustified claimant to national resources. The native on the other hand is not only a legally defined political entity but also self identifies, according to Mamdani, as the ‘expropriated’.

It is at this cusp, of law and desire, that the so called anger/fear of the ‘native’ is materialized and Trump, as the defender of the patria, made possible. Not necessarily because he is any more American than president Obama but because of his privileged position; not as billionaire but rather as the obscure ‘native.’ Whose identity hails from and is thus, traceable through obscurity, but certainly through faith and skin color to its ‘founders.’ This has made politics a desire’s play.  A means to purge the presidency of its impurities: of half-ness and otherness. Thus positioned as America’s sentinels, these so called natives’ envision a ‘perfect world’—without the ‘other.’ The implications for this are however, extreme and deleterious.

“And he had his men load his rifles, and he lined up the 50 people, and they shot 49 of those people, and the 50th person, he said; ‘you go back to your people and you tell them what happened.’”

Trump, besides his gory wishes, is an entertainer, a real estate investor, a casino builder, a republican-party presidential candidate who believes America should be run like, not just as any, but his company. The republican-party is 89% self-identified as non-Hispanic white, with 61% of its affiliates saying they are angry and irked by current events. At 60% gun ownership, 73% of republicans also say their party is doing them no good. And if 2014 elections are indications the party’s movers are 65 or older. One desperately hopes nostalgia to be at play. But, 53% of republicans believe that, as of November 2015, President Obama to have precipitated unemployment.   And contrary to stats, that republican counties consume more food stamps, republican leaders tout America’s first black president, as a socialist dictator, and a food stamp president.

Bauman Zygmunt, someone I had the pleasure meeting a few years ago, in his seminal work on the holocaust—‘Modernity and the Holocaust’ helps us contemplate and visualize what this new political swagger may hold.  To begin with, for him the West is engaged in intellectual self-delusion, by assuming the Holocaust un-imaginable in today’s world.

To the contrary, he argues that the social features that made the Holocaust possible have not disappeared to the extent that one can’t be certain of the ‘ripeness’ of conditions of such an event.  When it happened, no one expected it. And since Hitler’s ideological vision—his genocide project was built on desire to control and manipulate, the potential is as real.

At its core, genocide is a product of modern ideology combined with absolute power with access to exacting bureaucracy—and resource. Grounded in a bureaucratic hierarchy, ‘akin to that of a subordinate group within a normal power structure’ the genocide project touts a ‘perfect world’ before it consumes its foot soldiers.  For him neither Stalin nor Hitler killed to capture territory but on the contrary they killed to manufacture a ‘perfect world’.

‘I could stand in the middle of 5th Ave and shoot somebody’ and not lose a voter; Trump says to his exuberant followers.

At a time when scholars are decrying a New Jim Crow—the reversal of civil right gains as demonstrated in the arrests of millions of blacks for minor crimes: acts geared toward denying basic human rights and marginalization. And at a time when, globally, one in every 122 humans is either a refugee, internally displaced, or seeking asylum, one is compelled to ask:

Where is America heading subsumed by an exuberant crowd led by an arrogantly exuberant rich man, who boasts of having circumvented US laws to catapult himself to richness? While openly insulting a sitting president and talking of deporting Mexicans and banning Muslims all without due process of law?

America is not a real estate. Not a casino. Not a business enterprise. Not a parlor. It is the land of laws and the many; the refugee, the immigrant, the wretched and the brightest.

Give me your tired, your poor,
Your huddled masses yearning to breathe free,
The wretched refuse of your teeming shore.
Send these, the homeless, tempest-tost to me,
I lift my lamp beside the golden door!

On Pedestal of the Statue of Liberty

Fathi Karshie is a certified mediator in the Seattle area, where he’s lived most of his life, enjoying the diversity it offers. Karshie holds a Masters Degree in US law.