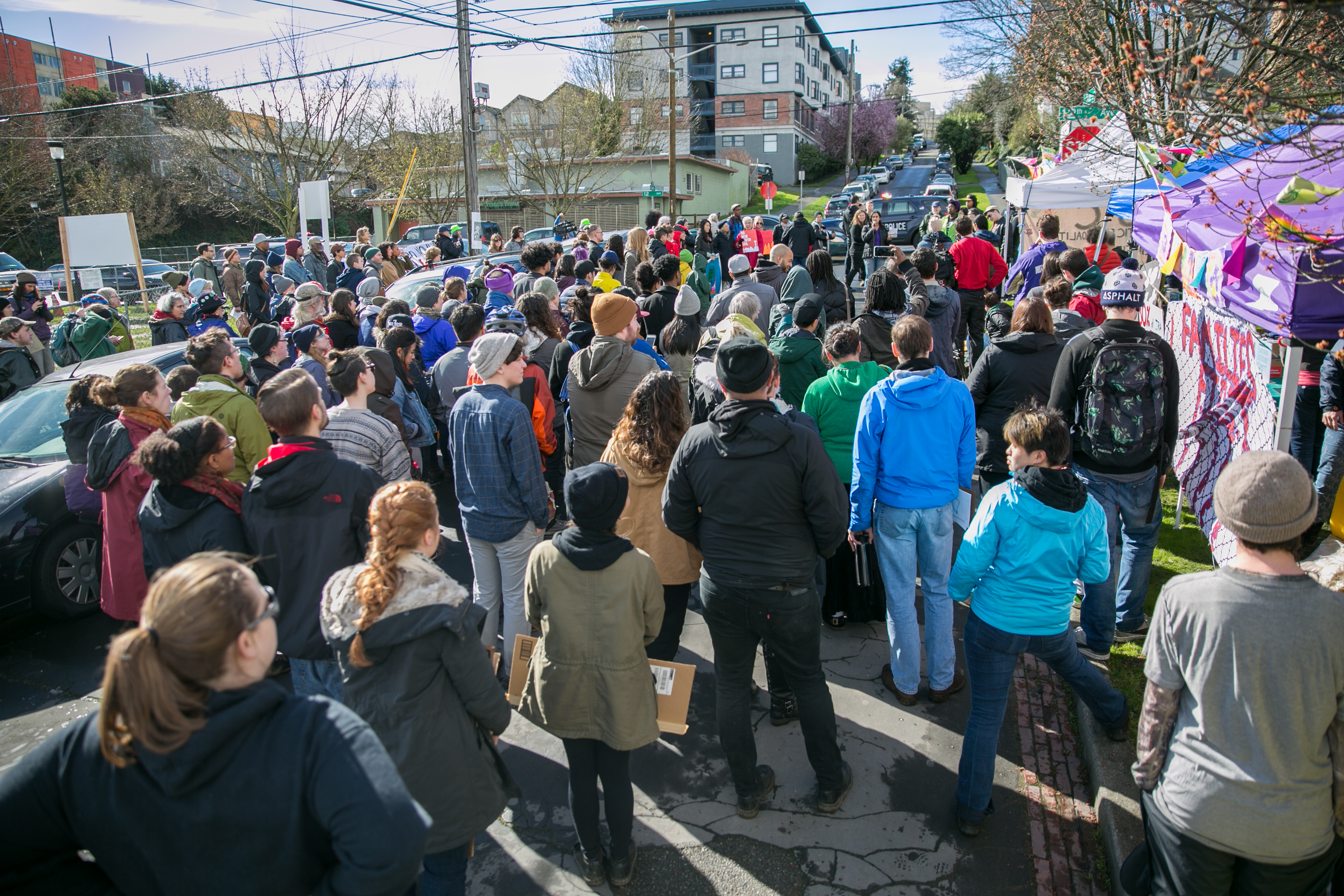 Dozens of tents lined the sidewalk of 12th Avenue and Spruce Street on Sunday afternoon, and more than 200 community organizers, activists, and religious leaders withstood intermittent rain showers to gather for a five hour-long camp out just outside the King County Juvenile Detention Center, in protest of a new center scheduled as its replacement.

“I was a little worried this morning when I saw the weather, but I know that people’s passion for stopping this project would overcome even the nasty March weather,” said Angelica Chazaro.

Chazaro, who co-organized the event, was pleasantly surprised at the number of groups that responded favorably to her email request earlier in the week calling for organizations supportive of Seattle’s “No New Youth Jail Movement” to set up tents and booths outside the facility’s south side wall.

Sunday served as a grand coalescence of sorts for the array of local organizers who have been fighting for nearly four years against King County’s plans to replace the King County Youth Services Center, which includes the Juvenile Detention Center, with a $210 million building, which would include a new juvenile detention area, approved by King County voters in August of 2012.

At the center of the protest is the County’s struggle to reduce the proportion of incarcerated youth of color. Despite Black and Latino youth making up less than 12 percent of King County’s youth population, they account for more than 50 percent of imprisoned juveniles.

Conversations at the booths of the Local labor unions, environmental groups, religious organizations, students from nearby Seattle University, the Raging Grannies, the Uhuru Solidarity Movement and Pipsqueak held a common theme: Why was the county building a facility that exacerbated this problem without first dealing with the problem?

“I don’t think anyone can hold the extent of the resistance to [the center]. This is widespread,” said Chazaro, who was overwhelmed at the turnout.

“This is exactly why we wanted to do this event, to refute this ridiculous idea promoted by the County that it’s just 20 or 30 people [protesting the facility].”

The event attracted a moderate police presence despite being peaceful, as SPD officers blocked off vehicle entrance to the street.

About 90 minutes in, people left their booths to listen to speakers stationed near the east side of 12th and Spruce St deliver screeds against the juvenile justice system.

“We all matter… the youth who are inside the jail matter. They need to feel loved, and feel important,” said Tabitha Millian, who took the microphone first.

Senait Brown, spoke directly after, telling the crowd that try as they might, the County would not be able to “stop a racist system.”

Brown is a head organizer for Ending the Prison Industrial Complex (E.P.I.C), the organization, along with Youth Undoing Institutional Racism (Y.U.I.R), that has been credited with leading the mobilization against the construction of the Children and Family Justice Center.

The Center is scheduled to break ground in spring of this year, but Brown contends it will never be erected.

King County officials maintain that state law requires them to provide a juvenile dentition facility and that the current Youth Service Center is outmoded. They have pointed to undrinkable water, cramped public court spaces, leaky ceilings and flooding basements as reason for a replacement building being necessary.

Organizers against the jail have sowed victories over the past year, as Seattle City’s Council passed a non-binding resolution calling for zero-percent detention in the city, in addition to providing $650,000 for community-led alternatives to detention.

King County also announced it would no longer refer youth to prosecutions for status offenses (truancy, running away from home), and has launched a task force on racial disproportionality within the juvenile justice system. The County also regularly notes that it has managed to reduce its juvenile population by 70 percent over the last decade, as proof they are serious about reforming the juvenile justice system.

Brown looks at these developments as merely concessions however, with a bigger prize waiting.

“[The County] isn’t capable of lifting up better solutions. We have to focus on the people’s plan,” she says, referring to a plan called the “People’s Plan for Community Justice,” developed by organizers, and formerly incarcerated youth and their families that includes a community run holistic health services center as an alternative to the jail.

Brown joined other organizers on the day, including Chazaro in asking the city of Seattle to revisit providing the County with the necessary Master Land Use permit required for the facility’s construction.

“This is a chance for the mayor, the city attorney, the city council to put their money where their mouths are, to basically say if we’re against systemic racism in the city then we have to be against this building. I think for the mayor not to have yet taken a position on the jail is unconscionable at this point. He can’t stay on the sidelines,” says Chazaro.

The afternoon included activities from meditation to writing circles. When the evening finally wrapped up, many took their conversations about tactics and strategies to stop the center’s construction into coffee shops and restaurants. If Sunday was any indication, those conversations won’t cease anytime soon.