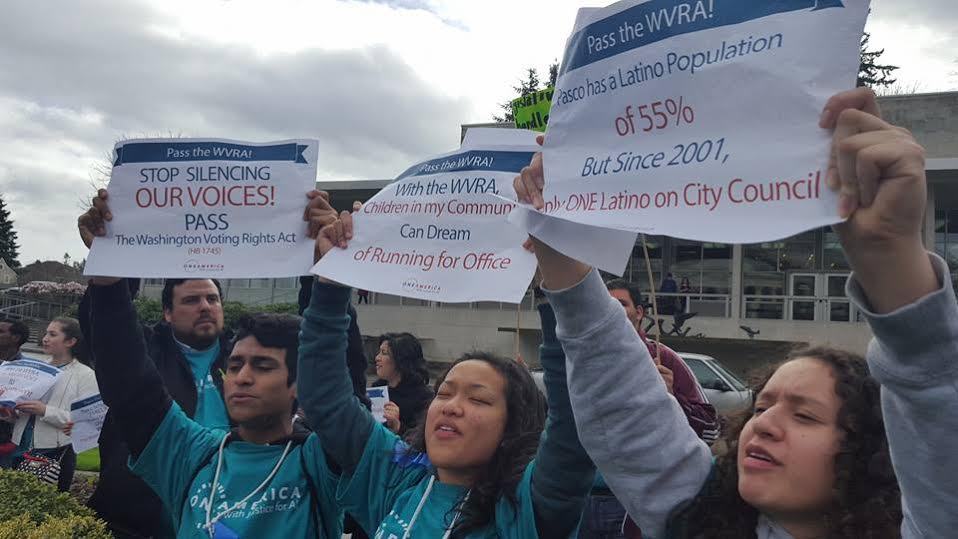 This is what teenager Cindy Roman from Federal Way asks herself when walking through the white marble halls of the Capitol.

It’s the fourth year the Washington Voting Rights Act bill has failed to pass the Republican-dominated Senate. The argument for the bill: specific communities are excluded when it comes to the voting system where representatives and school boards begin to function like white-out, erasing the communities of color they represent.

Roman was speaking as part of the national OneAmerica organization, which was created after 9/11 in reaction to the backlash against immigrants, communities of color, and Muslims. It is now the largest immigrant advocacy organization in Washington State.

While Roman and Salma Silva spoke for OneAmerica as Federal Way students, a school district with a diverse board — as Republican Rep. Linda Kochmar also of Federal Way, pointed out ­– the two students demanded that it doesn’t mean the issue isn’t present across the state.

Tacoma’s Franklin Pierce School District, for example, has elementary schools with as many as half of their student population being Hispanic, and yet the school district’s board members are all white except for one, Melanie Morgan. In fact, eight out of 15 Franklin Pierce schools have less than 37 percent white students in each student body.

“ I plead with all my heart that the voting rights act should and must be passed,” said Jorge Chacon of Wenatchee. He feels as long as the bill isn’t implemented, it hurts the way Latinos and Latinas think and feel about America, and it also hurts the spirit and meaning of the United States itself.

The bill would allow citizens to pursue legal action should they find an election process discriminatory. This applies to cities, counties, and towns with populations under 2,000, and school districts with less than 500 students.

That doesn’t mean the bill requires people of color to be voted in; it instead gives fair play in the voting process by narrowing each county down to three subsections called commissioner districts, such that each represents as close to 1/3 of the population as possible, and each has an elected commissioner.

Sen. Pramila Jayapal, D-Seattle, founded OneAmerica in 2001. She was excited to see a large turn-out of the organization’s members from all over the state in one room at the Capitol.

“Presence matters,” she exclaimed. “These are bills that take power and shift where the power is from.”

Nonetheless, right before the bill officially died off again this year on Friday, advocates and lawmakers alike were optimistic it would survive.

House Speaker Frank Chopp referenced the organization’s past work with the Dream Act that gives illegal immigrants in college access to financial aid. The bill had to go through seven years of trial and error before becoming law, which Chopp reminded the audience of, insinuating all hope for the Voting Rights Act Is not lost.

Governor Jay Inslee agreed: “I believe the same persistence, inspiration, and teamwork that passed the Dream Act can pass the Voting Rights Act.”

But the bill only has one Republican sponsor, and every sponsor is on the House side, perhaps reflective of the Senate’s apparent opposition. The companion bill, Senate Bill 5668, has been sent to the “X file” every time, also known as the it-never-comes-out-alive file.

Regardless, supporters are still adamant.

“It’s a broken system,” Chacon said. He asked the audience what not having a voice does to someone.

“Our democracy works best when more people are engaged,” Gov. Inslee said. “This state doesn’t have room for intolerance.”

While the governor is up for reelection this year, he has been a supporter of this Act since it began, and he also supported The Dream Act.

Featured image: Three Renton High School students hold up We Are One America signs before a meeting at the Capitol (Photo: Pavan Vangipuram)