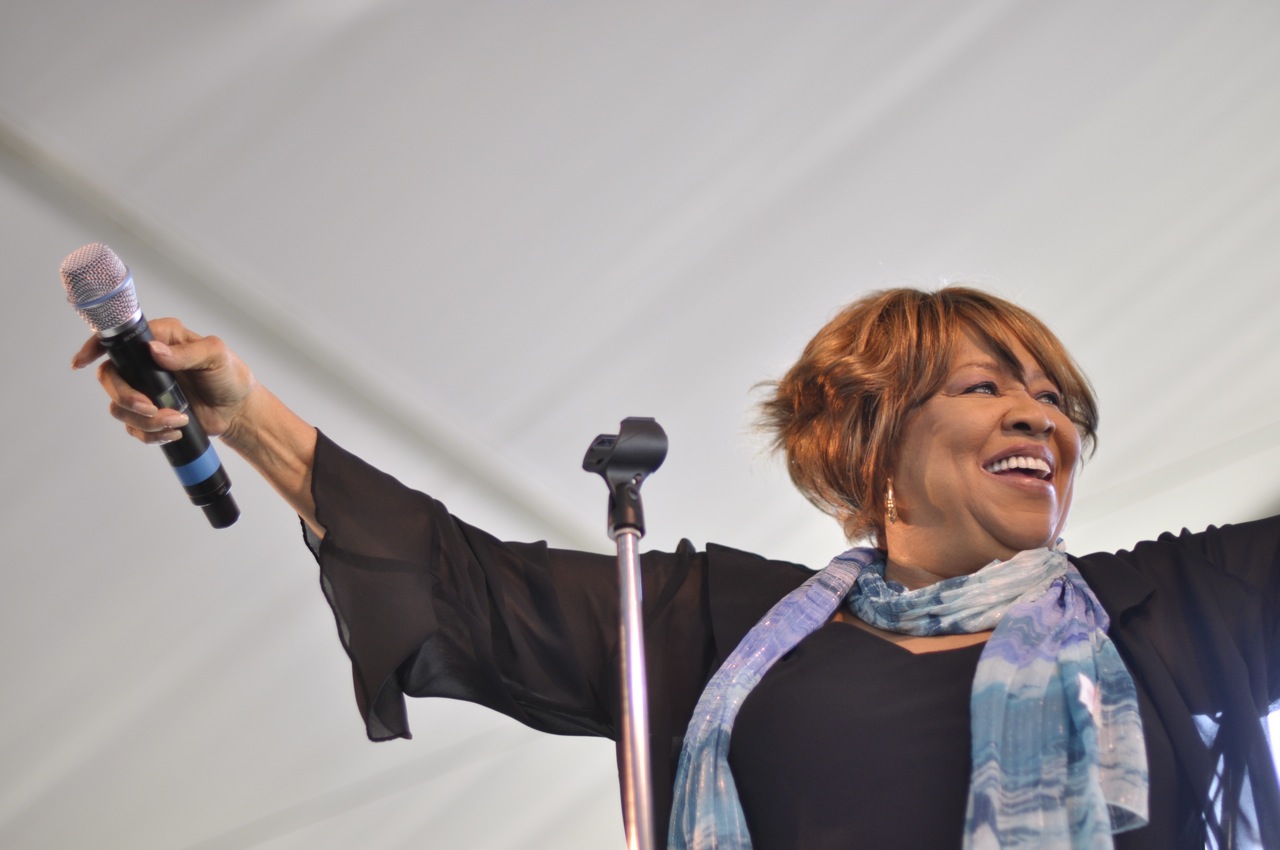 Mavis Staples was only ten years old when she stood up to sing before the congregation of a Chicago church. But with her small chin held high, she was already embracing her gift of a uniquely powerful, breath-taking voice.

It was 1949 and women and girls – black ones in particular – were expected to be quiet, meek, understated; to avoid conceit and downplay their talents; to stand in the back and blend in with their surroundings. From the beginning, under the direction of her father Roebucks “Pops” Staples and singing alongside her sisters and brother, young Mavis rejected these expectations. Her literal voice –so robust that radio deejays had to avow to incredulous listeners that “This IS little 15-year-old Mavis singing,” not a man or a grown woman as they all expected – has graced airwaves, filled concert halls, and inspired raucous church sing-a-longs. Her metaphorical voice – which is exceptionally strong owing both to her celebrity and her vibrant nature – has tirelessly championed civil rights causes, putting forth a clear message of equality, compassion, and action.

In the six and a half decades since her debut performance, Mavis has consistently delivered music fueled by an unflinching commitment to justice and revolution — first as a member of The Staple Singers and later on after striking out on a solo career.  And she has done so with a passionate, animated fabulousness that has captivated audiences and, I would venture to say, inspired more than a few amateur female songstresses embarking on their solo careers.

When my mom and I saw her perform at the Moore Theater a couple of years ago, I was completely bowled over by the attraction I felt to this short, stout woman in her mid-70s. Decked out in black clothing and gold jewelry, with a smile you could see from the 27th row, throwing her head back to laugh as she exchanged banter with her band, and dancing to the gravelly notes of her own beautiful voice, Mavis radiated the unmistakable energy of a woman profoundly generous of spirit but also aware of the need to maintain ones sense of self. I remember thinking: “This is exactly the kind of woman I want to be.”

Mavis was married once, briefly. They split up after her ex-husband tried to demand that she give up singing and touring to stay home. Her decision was not hard. “He wanted me to stop singing!” Mavis recollects, baffled. “And I told him I was singing before I met him. It was just a man thing, just want me at home. No way! I keep my songs and I continue to sing, and I let you go.”

The Staple Singers initially performed mostly traditional gospel, but by the early 1960’s they had begun exploring other, more accessible genres including soul, folk, and blues.  Additionally, they started writing songs that spoke to the civil unrest stirring much of the country during that time. Their songs demanding equality were part of a nationally touring stage act with an impressive grassroots fandom, allowing their message to reach many and diverse ears. After speaking with the Reverend Martin Luther King, Jr. at a concert he attended in Montgomery, AL, the band started writing and playing songs exclusively in support of the American civil rights movement, including ones describing the 1965 Selma-to-Montgomery marches (“March Up Freedom’s Highway”) and others in honor of the Little Rock Nine (“Why am I treated so Bad?” and others).

Though most of the other protest musicians getting playtime on the radio, including Mavis’ beau Bob Dylan, were white, by the end of the decade the Staples Singers were a leading voice in the folk protest movement. And Mavis, still a young woman, started down a lifelong path of using her art to provide a resonant voice to those disenfranchised by the many oppressive forces of our male- and white- dominated country.

Just last month, undaunted and indefatigable at the age of 76, Mavis released a new studio album, Livin’ on a High Note. The album is made up of songs written by other celebrity musicians, but it is clear that they’ve been carefully curated. The collection is characterized by the cautious but hopeful tone of someone living in a world that has come a long way but still needs a lot of work.

As evidenced by the album’s title, Mavis focused not just on spreading the message of change but on contributing to a more vibrant, supportive, love-filled world – two threads of purpose that Mavis has worked her whole life to weave together. “I’ve been singing my freedom songs and I wanted to stretch out and sing some songs that were new,” she intimates. “I told the writers I was looking for some joyful songs. I want to leave something to lift people up; I’m so busy making people cry, not from sadness, but I’m always telling a part of history that brought us down and I’m trying to bring us back up.”

In the middle of singing uplifting, upbeat, even catchy songs, however, Mavis makes some pretty intense statements about our past and present civil rights situations. Such as “History, Now,” where she searches for a way to move forward from a shared history so pocked by war and discrimination that even the most forgiving must steel themselves.  “You do see a pattern, right?” She asks. “Yet somehow our love doesn’t die.”

At 76, Mavis Staples has shown that she is as much an activist as ever, still using her art to advocate for our society’s disenfranchised.

Emily Naftalin runs like Forrest Gump, often carries around a box of chocolates, and loves talking to strangers at bus stops, but she’s still working on her ping pong game. She mostly spends her days finding and cataloging agricultural development research for an online repository, but her real passions are rock ‘n’ roll and anything having to do with Bob Dylan.

Note: This piece has been updated to reflect non-substantial edits made to a previous version.

Featured Image: Mavis Staples by digboston, licensed under CC BY 2.0