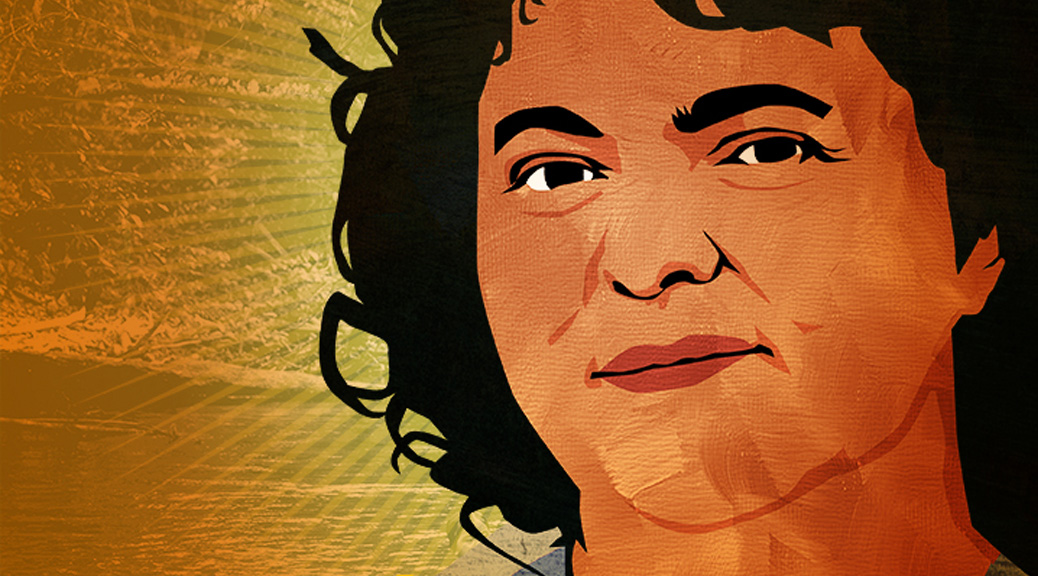 Berta Cáceres was a Honduran environmental activist, indigenous leader of the Lenca people, mother of four, and fearless critic of the multinational corporations that seek to convert her people’s ancestral land and water into profit. She was born on March 4th, 1973, and she was assassinated just two weeks ago on March 3rd, 2016.

In 2015, Berta received the prestigious international Goldman Environmental Prize for her work. In her acceptance speech she made an impassioned call to more radical action for marginalized communities and the planet. “We must shake our conscience free of the rapacious capitalism, racism, and patriarchy that will only assure our own self-destruction,” she implored.

Berta was a tireless organizer for self-determination and for the rights of the planet. She was radicalized from a young age, growing up with a strong mother who was both a midwife a local mayor. In the 1980s, during the revolutionary armed struggles in Nicaragua and El Salvador, her family listened to the clandestine news from those countries and helped support the cause. In Honduras, where indigenous identity has historically been marginalized, Berta founded a powerful national indigenous organization to defend their rights, the Civic Council of Popular and Indigenous Organizations of Honduras (COPINH) in 1993.

After the 2009 U.S.-supported coup that ousted President Manuel Zelaya, progressive movements organizing in Honduras – including indigenous and environmental movements – faced a major escalation in repression.  The new, military-backed regime reversed any progressive gains the country had made under Zelaya. And multinational mining corporations – who have permits to mine nearly 30 percent of Honduran national territory – saw an opportunity to move forward under the protection of this militarized state. Berta and COPINH were leaders in the resistance to the coup and its aftermath.

One of the extractive industries that came into Honduras and the Lenca communities was hydroelectric power companies, including DESA, a Honduran state-owned company, and Sinohydro, the world’s largest dam development corporation. When the Lenca community of Rio Blanco found out about Sinohydro’s plans to construct a dam on their ancestral land, they went to COPINH. Berta led a brilliant, multi-pronged, international campaign to defend their land and the river, fighting a grassroots campaign against a corrupt government and multinational company in courts, international banking institutions, and in the streets. Berta led a human blockade to prevent construction of the dam site. Using a carefully organized system of alerts to keep everyone in the loop, beginning in April 2013 the Lenca community maintained a blockade for over a year, withstanding multiple eviction attempts and violent attacks from militarized security contractors and the Honduran armed forces.

During this time, Berta began receiving regular death threats. Known assassins, local thugs, and even local elected leaders would tell community members that she was on a hit list, or that she would be dealt with “in one way or another.” As assassinations and disappearances increased with impunity in Honduras, Berta had to have known that these threats were serious. In July 2013, the Honduran military shot at a COPINH protest and killed Tomas Gomez. And still Berta continued organizing. By 2015 the organizing won a major, though temporary, victory. International funders pulled the money for the project, and Sinohydro stopped construction of the dam. There are others, however, who are still moving forward to build the dam, and clearly they are willing to do anything – even assassinate an internationally celebrated leader – to squash the resistance.

Watching Berta’s Goldman Prize speech now, it looks like she knew that neither she nor the planet had time for caution. She called the Lenca people the “ancestral guardians of the rivers, in turn protected by the spirits of young girls who teach us that giving our lives… for the protection of the rivers is giving our lives for the well-being of humanity and the planet.”

Berta Cáceres gave her life for the protection of humanity and the planet.

I had the honor of meeting Berta and interpreting for one of the speeches she gave on her visit to Seattle this past fall. I left the few hours I spent with her deeply moved; I felt so energized and full of life after sitting next to and translating the words of this powerful woman. And it wasn’t just me. I could see her courage and warmth, audacity and good humor infect everyone in the room.

I remember someone asked at the end of her talk if the international awards and attention would help protect her life. We all wanted reassurance that we wouldn’t lose this powerful woman to the forces of greed and environmental destruction. Of course now we know that, tragically, her international fame was not enough to save her life. But many of us around the globe take small solace in knowing that her life inspires us to be more courageous, more audacious, and more revolutionary in our work to defend humanity and the planet.  ¡Que viva Berta Cáceres! Long live Berta Cáceres!

Take Action to Demand Justice for Berta, and for her Comrade who Witnessed the Murder here.

Beverly Bell of Other Worlds

Krista Lee Hanson lives in South Seattle.  She is a parent, yoga instructor, bread baker, interpreter, and organizer for social justice.  Krista is a long-time activist with CISPES, the Committee in Solidarity with the People of El Salvador.