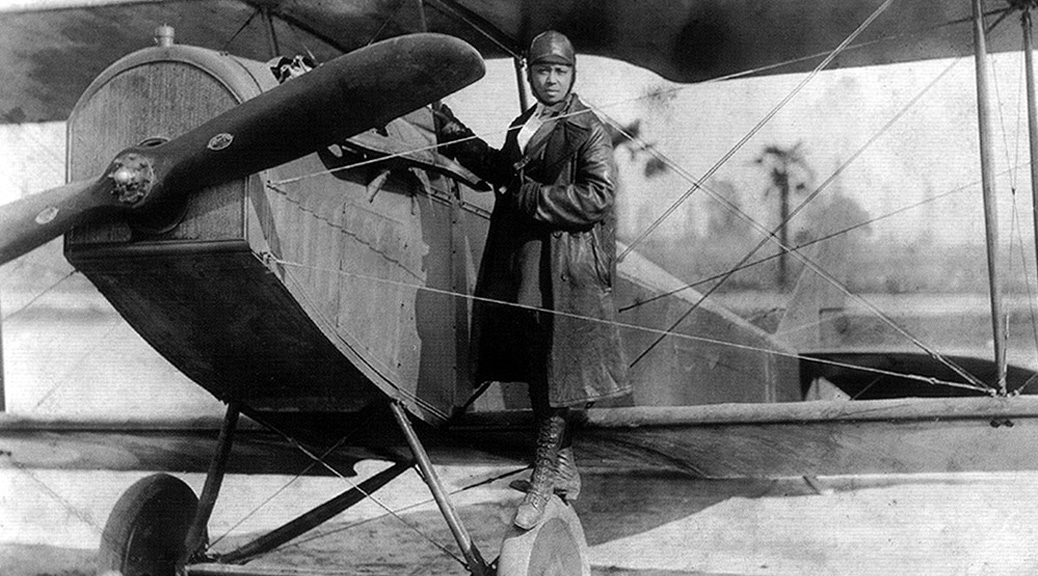 In the early 1900s, aviation was inspiring the imagination of the masses. Flying an airplane had become a reality for those who were daring and dedicated enough to learn. While many men were pursuing this dream, a few revolutionary women were making their mark amongst the flyboys. In the women’s arena, Amelia Earhart claimed much of the glory, as did her instructor, Neta Snook. Both received high accolades from the media and their male peers. Lesser known was Bessie Coleman, who was not only an early female aviator, but also the first woman of African American and Native American descent to hold an American and international pilot’s license.

Born in the year 1892 to a family of sharecroppers in Atlanta, Texas, Bessie’s opportunities seemed limited. Her early education entailed walking 4 miles to a one-room schoolhouse.  She would have to skip school to help her family pick cotton, and her father left the family when she turned 12. A determined student, Bessie sought to continue her education, but was daunted by lack of financial resources. At the age of 23, she followed her brothers to Chicago to seek work.

Bessie was inspired by the tales of pilots returning from World War I, however, American flight schools would not admit women or blacks. Luck brought Bessie to meet Robert Abbot, an educated African-American man who was a self-made millionaire and founder of the Chicago Defender newspaper.  Robert encouraged Bessie to follow her dreams, and suggested she attend flight school overseas in France and provided financial backing through his newspaper company to make it possible.

Bessie did not squander her opportunity: she took classes to learn to speak French, then travelled overseas to earn her pilot’s license at Fédération Aéronautique Internationale.  She spent the next few years honing her aviation skills and even returned to France a second time to receive more training to become a stunt flier. Returning to the states, she began work as an exhibition flyer and the crowds loved her daredevil flying skills. She earned the nickname “Queen Bess” and became a popular fixture at airshows.

Bessie dreamed of opening an aviation school for African Americans, but sadly died in an airplane accident in 1926. Thankfully, her achievements didn’t go unrecognized, and her notoriety inspired a generation of young people of color. William Powell was one of these young people, and wrote a book about Bessie called “Black Wings” in 1934 and started an aero club in her name. In 2006, she was inducted into the National Aviation Hall of Fame, and many public buildings in America and around the world have been named after her. In her short life of 34 years and against all odds, Bessie became a pioneer and hero of aviation and continues to inspire those who hear her story.

It’s an honor to be asked to write about a revolutionary woman for this project. I chose Bessie Coleman as my subject because I wanted to focus on a woman who followed her dreams into the realm of improbability. Being a woman of color in the early 1900s was very oppressive, yet somehow this young lady became a pilot – a job that was so extremely dangerous most men didn’t have the nerve to consider. I believe Bessie must have had a lot of grit, determination, humor, and integrity to pursue her dream to fly, surely the virtues of all revolutionary women.

Charmaine Slaven is a full time musician, dancer, dance caller, & urban farmer living in the White Center neighborhood, SW of Seattle.  She’s a hard-working revolutionary, and has been inspired by many strong women over the years.  www.charmaineslaven.com