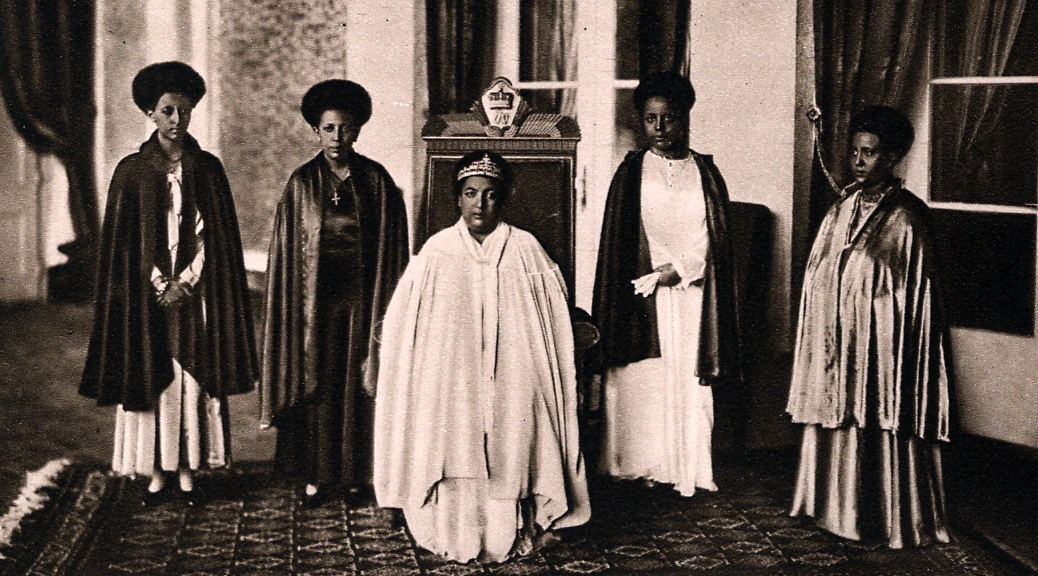 I am constantly asking myself, what inspires me as a woman? I look to the women in my life: the powerful pioneers filled with love, motivation and excitement. When I ask these women where their inspiration comes from, they direct me to the women who came before them – trailblazing the path to make the world a better place.

When I was invited to participate in this beautiful journey of 31 days of women’s amazingness, I thought about a woman who was so amazing, so motivated by change, love, and building the community; a woman who was vital in bringing many cultures and communities together, while setting a standard of class and what an elder is; a woman you look up to and look to for guidance. This is why I am inspired by the last queen of Ethiopia, Empress Consort Menen Asfaw.

Empress Menen Asfaw was better called, The Mother of The Ethiopian Nation. She was a women’s rights activist, successful entrepreneur and mother of ten; a true leader, opening child care centers and schools all over Ethiopia and building churches in honor of her devout faith. Empress Menen was born April 3rd, 1891 and died February 15th, 1962 of health problems.

Empress Menen was a true Queen Mother and co-ruler, and understood the importance of her role as co-ruler. Her love for her countrywomen and men inspired her to build many institutions to ensure empowerment, wellness, health and faith. As the mother of ten children, the Empress understood the importance of support to her and all mothers. Thus, she created childcare centers all over Ethiopia to ensure mothers had a safe place for their children to be watched over and nurtured. This allowed women to work, go to school and tend to smaller children as well as heal the injured during battle.

In addition to Empress Menen School for Girls, she founded and established many other educational institutions and churches and encouraged pilgrimages to Jerusalem. A devout Christian, she founded and sponsored many programs for the men and women of her country who were sick, disabled and poor. Always noticed for her humanitarian efforts, she played a large role in decision-making with her husband, Emperor Haile Selassie, by being his advisor, keeping him focused on communication and strategy and by using her economic autonomy to effect change.

Queen Mother Empress Menen was inspiring to so many with her kindness and compassion. During the Italian Invasion of 1935, Empress Menen played a most important role. While the men were fighting in battle, she organized facilities to tend to the wounded, doctors, nurses and emergency aid.

Empress Menen stood firmly against war and the torment that came from war.  She was instrumental in the development of The World Women’s Association, where she empowered many women of the world through discussions, forums and speeches. In 1936, Empress Menen rallied women from many countries to speak out against war. Fiercely and fearlessly stating in a speech, “We know that all Italian mothers and barren women, may worry about the war, since war is good for nothing. Therefore, all women found in the world should prevent the war, before it brings trouble and distress. They should collaborate their voice and request to avoid the war before the bloodshed comes on both sides”.

What I take away from this amazing woman is that she knew that we, women, are change makers; we have the ability to come together, forming community, speaking out, empowering, uplifting and changing the world – all we need is our voice. Let all women ring our voices together to learn from Empress Menen: learning lessons, asking questions, standing up for what is right and being fearless, while understanding that the present day calls for strength, kindness, compassion, faith, community and communication.

If I had the honor of meeting Empress Menen, I would say: “Thank you for being fearless and kind in a world that said otherwise!” After researching and learning about this truly amazing and inspiring Queen, I am empowered and energized – overflowing in love and life for how powerful we are! May we all have the audacity to be sisters, healers, and change-makers, empowered by our strength, kindness, compassion and truths!

Ariel Bangs lives in South King County. She is a tree hugger, food activist and chef, culinary anthropologist, dirt-digging plant eater, animal lover, healer and donut creator! Ariel is motivated and inspired by entrepreneurship and youth education and is a lover of all things chocolate!

Featured Image: Empress Menen Asfaw seated in the center and standing women from left to right are Princess Tsehai, Princess Tenagnework, and Princess Zenebework, her daughters, and on the far right is Princess Wolete Israel Seyoum, her daughter-in-law (Public Domain Image)