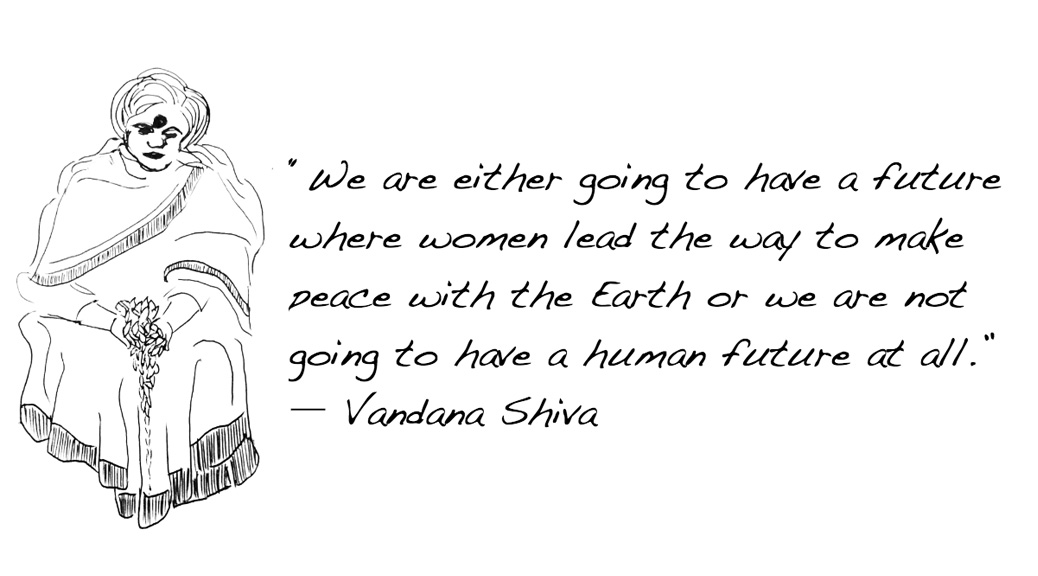 I first saw Vandana Shiva speak at Seattle Town Hall in 2013. As she spoke to “saving seeds as a political act”, I was struck by how the act of saving seeds is also a feminist and motherly act. Shiva is a demiurge of all my food system desires – a protector of our seeds, mother to our female food traditions. She speaks to womankind’s critical role in centuries of seed selection, thoughtfully picking the best varieties of staple foods, imbuing our motherly instincts to raise our little seedlings with the best shot at life possible. As women, mothers or not, our tendency to select for the whole tribe, nurturing for the long-haul, is instinctual. In Shiva’s ethos, food collection and preparation is inherently connected with environmentalism. In other words, getting down and dirty with your food’s lifecycle has an uncanny way of ushering you into earth stewardship. Shiva is an avid anti-GMO advocate and author of over 20 books. Her message is a holistic one, rooted in ecofeminism: in short – let’s stay connected to our food in it’s purest form, and absolve the notion that we are separate from nature.

Shiva’s ethos strikes a very personal chord for me. My professional involvement in a fair food system began in 2012, when I began working at the Rainier Valley Food Bank. I wanted to put my nonprofit experience towards ensuring access to food as a fundamental right, while connecting people with food origins. This was motivated by my own journey through eating-disordered behavior since adolescence. Through my healing, I saw an obvious link between eating disorders and a disconnect with the lifecycle of food and its medicinal value. From a very early age women (although not exclusively, but in particular) are fed ideas about food and their bodies that move them further away from food as a positive. It’s a corporate, media and money driven wormhole that takes considerable concentration to escape. The dialog sounds something like this: “I need to workout after eating this”… “She shouldn’t be wearing that”… “This food is going straight to my hips!”… “Suck your tummy in”… “Gotta get ready for bikini season!”… “She shouldn’t be eating that”, and of course the oh-so-iconic: “Does this make me look fat?”

The resulting culture consists of food-and-fat-fearing mongers that perpetually berate themselves and others for their female form and food choices. The alternative, for me, has looked something like this: asking myself questions like, “how do I want this food to make feel?” or “what does my body crave right now?” The more I got involved with where my food came from, the healthier choices I made, and the more rooted to nature I was. My call to action: embrace your fellow female’s fat folds, for it is an act of ecofeminism. Let us, in solidarity, stay rooted in mindful compassion for ourselves and others, and embrace the messages of Vandana Shiva to connect with our food, nurturing our souls and the earth’s soil for generations to come.

Elise Cope is the Associate Director at Rainier Valley Food Bank, a mother, and an artist. Her female form has taken many shapes: from narrow to wide, from construction worker to creator of intricate, feminine jewelry. She likes to push the boundaries of the “acceptable” female form.

One thought on “31 Days of Revolutionary Women, #23: Vandana Shiva”